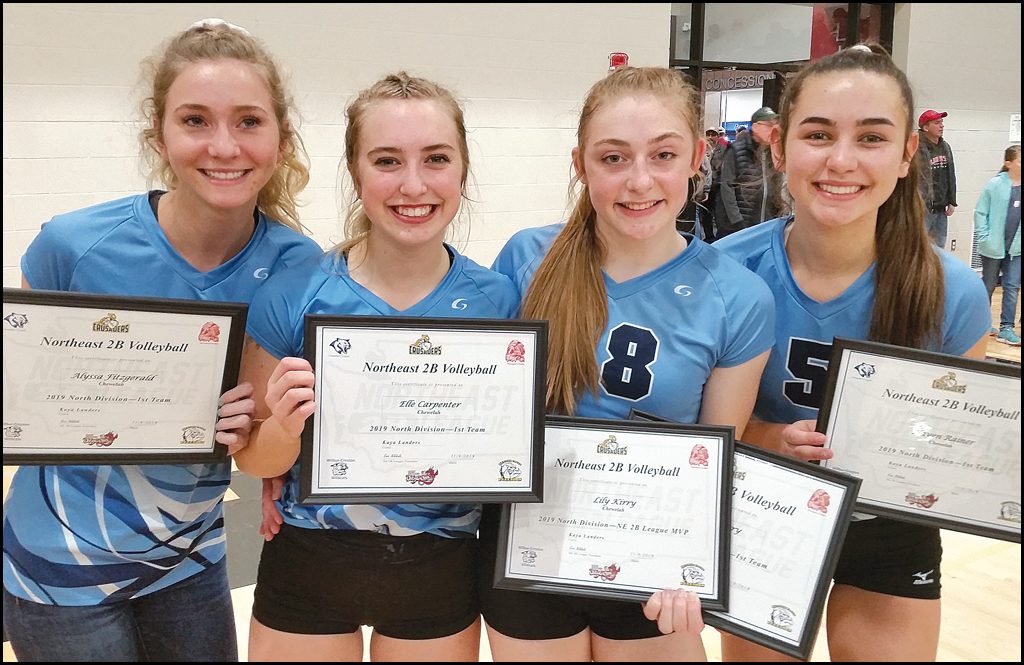 After one of the most successful seasons in Chewelah volleyball history, the Cougars are now collecting the accolades.

At the District 7 2B volleyball tournament, Chewelah players found out that four of them had been named to the NE 2B North All-League team. All four were invited to the All-State game as well, since they were seniors.

Senior Lily Kirry was named the NE 2B North League MVP after collecting 234 kills, which works out to 13.75 kills per match in league play and four kills per set.

Kirry was also strong defensively, with 127 digs on the year in league play which equals out to 2.2 digs per set.

Kirry is also a four-time state champion in the hurdles and 200-meter run, and she will be going for even more state titles this spring.

Elle Carpenter was named to the All-League squad after being the quarterback of the volleyball team. The setter passed the ball around with effeciency and event put in some gnarly kills of her own. Carpenter had 425 assists on the year and averaged 25 per game in league play, and 7.5 assists per set. Carpenter was also a defensive force with 180 digs or 3.1 digs per set.

Carpenter and Kirry will both play at the All-State game at Burlington Edison High School on Dec. 8. Both were among the top three vote-getters in the league for MVP. Rainer and Fitzgerald are both playing basketball and will not attend the all-state game despite being named.

Also being named All-League was powerhouse Haven Rainer who was a danger along the net all year long. Rainer had 136 kills, averaging eight kills per league match and 2.35 per set. Rainer also had 96 digs, 5.75 per match and 1.65 digs per set.

Alyssa Fitzgerald dealt with an injury this year but such a presence early in the season that people paid honor to her ability.

“It was impressive that the other coaches in the league remembered her from the early tournaments and past years and still deemed her worthy of all conference and voted for her,” Landers said. “She led us in blocks and kills much of the way before she was injured.”

Chewelah placed second in the NE 2B North this year with a 7-4 league record. They placed fourth in the district tournament and advanced to the state tournament in Yakima where they snagged one state victory over Lake Roosevelt.