Most mothers would be spending the next few weeks developing a Christmas list for their children. Instead, Brenda West-Bresnahan is planning her son’s funeral. Trevor Bresnahan was visiting friends in Stevens County when he went missing back in August. The 42-year-old Bresnahan was last seen on August 11 at 11:30 p.m. when he left a friend’s house in Marcus. On August 17, when he was expected at his mother’s home in Orting, Bresnahan’s dog Bear, who had been traveling with him, was found running alone on Springdale-Hunters Road by a homeowner.

West-Bresnahan filed a missing persons report and, according to Stevens County Sheriff’s Detective Mark Coon, just a couple of days later he located a dump spot of clothing and other items identified to belong to Bresnahan at the top of the Springdale-Hunters Road summit. A property owner called in to the sheriff’s office to report that there was a body on his land, which turned out to be Bresnahan. Shortly after that, authorities located Bresnahan’s 2006 Hyundai Accent not far away.

Detective Coon told The Independent that Bresnahan’s death appears to be a homicide and that items were sent out for DNA and fingerprint testing, and they are still waiting for a toxicology screen to come back. “It appears to be drug related,” the detective said, adding, “Cell phone warrants were lucrative with information concerning suspects. It’s looking like there are ties to the west side.” Authorities on the coast have been cooperative, and Coon expects to be spending some time out that way in the near future. “Between cell phones and science – once I get some substantiation, I’ll be heading over to the coast.”

Jennifer Mounts, the friend Bresnahan was visiting in Marcus, has since been found deceased, and that death is being investigated as well. On August 22, 2022, Mounts had posted on Facebook that she had been hanging flyers and organizing searches in the Hunters area in hopes of finding Bresnahan. She was found deceased later that month.

While losing a child is a parent’s worst nightmare, this is on top of the loss of Ms. Bresnahan’s other son, Tyler, who passed away on March 18 of this year. West-Bresnahan is asking anyone who has information about Trevor’s death to come forward, even anonymously if they wish. “Please call … try to empathize with the situation, and ask yourself how would you like it if it was your brother or your uncle or your dad, would you want your mom to go through that?” she said.

Anyone with information is asked to call the Stevens County Sheriff’s Office at 509-684-2555, ask for Detective Coon and reference case number 2208664. Callers may remain anonymous. 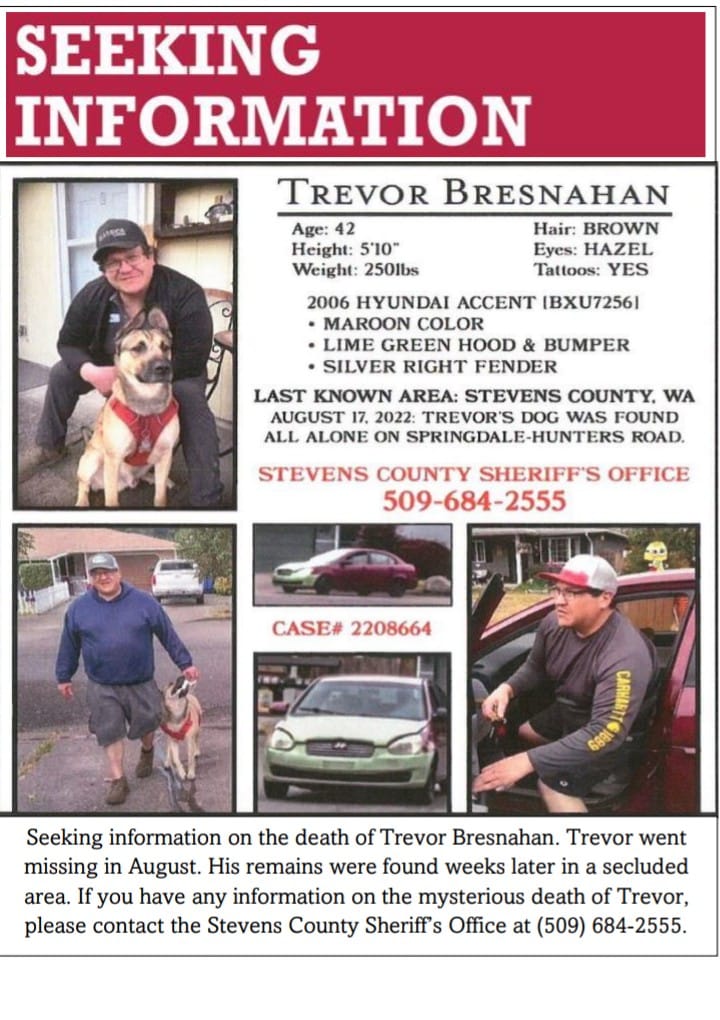