While authorities shift through the wreckage of the deadly Camp Fire in northern California, the number of missing people continues to haunt them. While the remains of 76 people have been recovered, there are still 1,276 people still listed as missing. This after the Camp Fire ripped through and destroyed the town of Paradise (population 27,000) on Nov. 8. The blaze is now 60 percent contained and rain is forecasted for the week. There are 46,000 people current under evacuation orders. The wildfire is the deadliest in California history, surpassing the Griffith Park fire of 1933 in Los Angeles. It also ranks as one of the deadliest wildfires in US history. In August of 1910, the Big Burn killed 87 people in the Northern Rockies. In 1918, Minnesota’s Cloquet Fire killed 450 people. The latest count also has the Camp Fire as having destroyed 12,700 structures.

Also in California was the Woosley Fire, which burnt 96,000 acres in Ventura and Los Angeles counties and killed two while destroying 1,452 acres. Authorities say that fire in now 91 percent contained. On Saturday, U.S. President Donald Trump visited Paradise and the scene of the Woolsey Fire. Click here for the full story.

WORLD NEWS
Mexican city residents protest migrant caravan
Hundreds of Tijuana residents congregated around a monument in an affluent section of the city south of California on Sunday to protest the thousands of Central American migrants who have arrived via caravan in hopes of a new life in the U.S. Tensions have built as nearly 3,000 migrants from the caravan poured into Tijuana in recent days after more than a month on the road, and with many more months ahead of them while they seek asylum. The federal government estimates the number of migrants could soon swell to 10,000. Click here for the full story.

Saudi king’s speech makes no mention of slain journalist
Saudi Arabia’s King Salman on Monday gave his first major speech since the killing of journalist Jamal Khashoggi by Saudi agents, expressing support for his son, the crown prince, and making no mention of allegations that the young royal ordered the killing. Click here for the full story.

Gov. Jay Inslee’s out-of-state trips strain budget of Washington State Patrol security detail
Over the past year, Gov. Jay Inslee has crisscrossed the country in his role as chair of the Democratic Governors Association, visiting more than a dozen states, from Hawaii to New York, and most recently stumping this month for candidates in Florida and Georgia. The spike in out-of-state political travel has heightened Inslee’s national profile as he considers a possible 2020 bid for president. It also has helped bust the taxpayer-funded budget of the plainclothes Washington State Patrol security detail assigned to protect the governor, leading the Patrol to seek a $1.3 million budget increase for the unit. Click here for the full story.

SPORTS NEWS
Army football ranked for the first time since 1996
Army is ranked for the first time since 1996, moving into The Associated Press college football poll at No. 23 on Sunday as it begins preparations to face rival Navy. The Black Knights (9-2) have been edging toward the Top 25 in recent weeks, and they finally broke through. The rest of the rankings were mostly unchanged after a weekend with few big games or surprising results.

WSU moves up to No. 7 in latest AP poll, barely behind Oklahoma
Fresh off a 69-28 whipping of the Arizona Wildcats, the voters in the Associated Press poll moved the Washington State Cougars up to No. 7, just a handful of points behind the Oklahoma Sooners for the No. 6 spot in the top 25. The Cougars also moved up to No. 7 in the coaches poll. WSU, previously ranked No. 8, benefitted from a loss by the erstwhile No. 7 West Virginia Mountaineers, and they now sit just 33 points behind the Sooners. Click here for the full story.

WEATHER FOR THIS WEEK 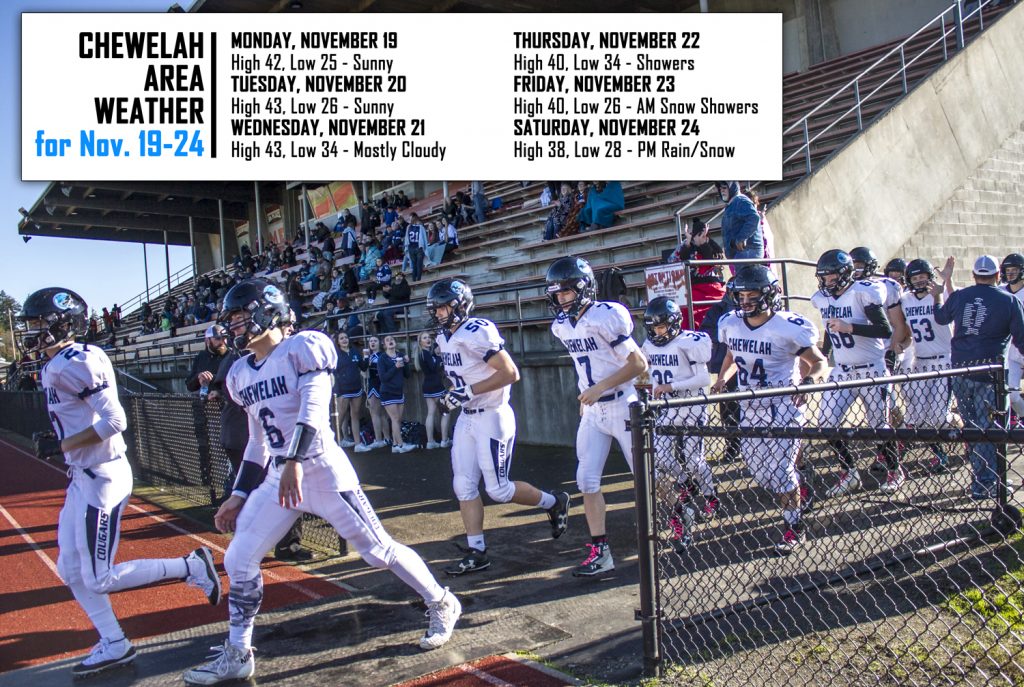