THE BEST WRESTLING TEAM IN SCHOOL HISTORY? Cougars place third, first time in school history on the podium at state

Seven Chewelah Cougar wrestlers will weigh-in a little heavier this week, not just because the season is over and they can now pig-out on the types and amounts of food they have restricted themselves from for the past three months, but because they will all be wearing state tournament medals around their necks.

The Cougars returned from the Tacoma Dome with two state championships, three third-place medals, a fourth place medal, a sixth-place medal, and a third place team trophy from this year’s state wrestling championships. The Chewelah septet won 29 bouts and scored 152.5 team points to finish third behind Tonasket and Lake Roosevelt out of the 45 class-B schools sending competitors to the tournament. This was Chewelah’s highest-ever finish in the team standings at the tournament.

“Coming into this year, I felt I had a unique group of wrestlers that could really do something special,” said Coach Tim Slater. “I believed if we took care of business, we would be in the top five. I’ve been with this senior group since they were freshmen. I am proud of the way they have grown and developed. Winning state medals to cap off their careers is a bonus, a validation of all their hard work and growth. I am proud of everyone who helped us achieve this monumental accomplishment.”

Kaden Krouse won his second state championship in the 170-pound weight division with an 8-3 decision, and Jake Jeanneret followed with an 11-4 decision in the 182-pound weight class championship. It was the first time that Chewelah has had two state champions since 2002 when Seth Weatherman and Phil Eggleston earned first-place medals. Krouse is a sophomore and Jeanneret is a junior, so they will both return to defend their state championships at next year’s Mat Classic. 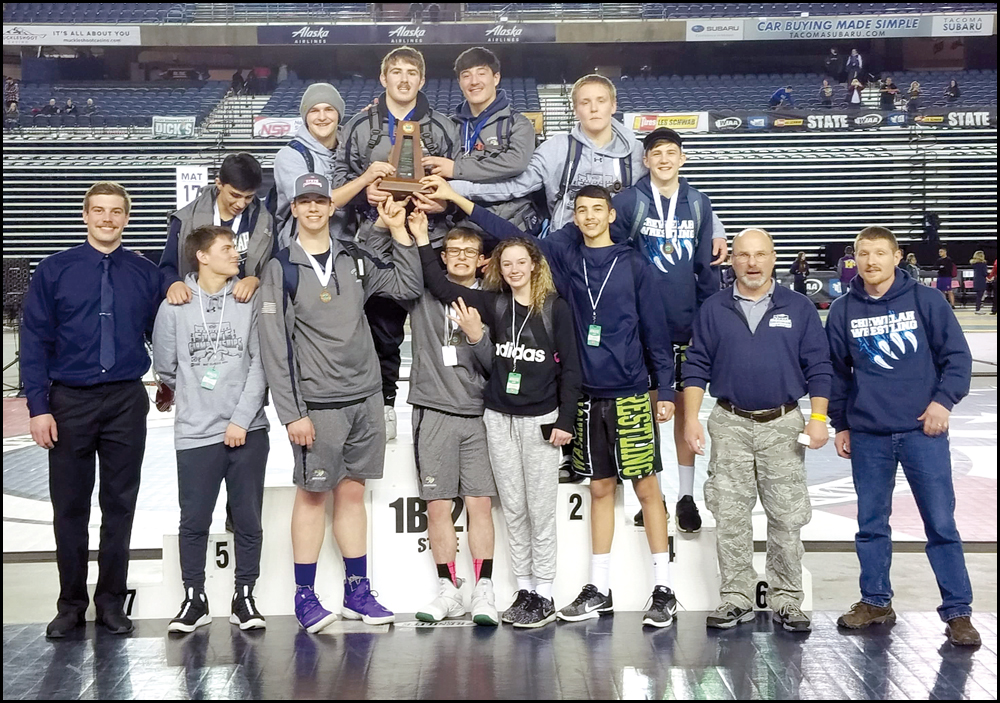 The 170-pound championship bout was truly a battle of champions. Chewelah’s Krouse was the reigning state class-1A champion. His opponent, Ashton Dowell of Adna, was the defending state class-B champion from a year ago. Both entered the tournament with impressive season records and accomplishments. Krouse had fought his way into the championship finals with a fall, an 18-3 technical fall and an 11-4 decision. Dowell had a fall and a 9-0 major decision, but needed a late one-point escape in the third round to defeat his semifinal opponent by a 5-4 score.

After a scoreless opening round in the championship encounter, Krouse put the first points on the scoreboard with an escape and a takedown to gain a 3-0 lead. He gave Dowell an escape later in the round to lead 3-1 going into the final two minutes. Krouse cut Dowell loose for an escape early in the third round and then took him down to his back for a three-point near-fall to spread his lead to 8-1. He gave Dowell another escape at the end of the bout to claim his second 170-pound state championship as a sophomore.

“Going into the state tournament, knowing that I could be facing a state champion at one point never really crossed my mind,” said the two-time champ. “I just focused on one match at a time. I knew that if I would wrestle the way I could, I would be fine. I did watch Dowell a little, but mostly I remained focused on wrestling my way, my style.

“I knew I wrestled better on my feet than anyone else I wrestled, and with my popped-out rib I knew I could not ride very long because of the pain, so I just kept taking opponents down and then letting them go unless there was an opportunity for easy near-fall points or a pin. This is where my coaches have helped me, because they have different techniques for every position which helps me choose which one best fits my style of wrestling.

“Watching Jake win a state title right after me gave me the same feeling of when I won. I am super-proud of him and I am glad he is on my team.”

“Kaden’s finals opponent was strong, fast and aggressive, so we knew Kaden would have to wrestle his own smart, technical style to win the championship match,” said Coach Slater. “Kaden also was easily able to match Dowell’s intensity, and that mentally broke him in the third round.”

Krouse scored five takedowns and a three-point near-fall to lead Alex Moe from Rainier by a 14-2 score before pinning him early in the third round. In the quarterfinals, he used his “catch and release” strategy to score five takedowns in defeating Jack Jordan from Raymond by an 11-4 score. Krouse then used six takedowns and a pair of three-point near falls to earn an 18-3 technical fall over Paul Jones from Kittitas in his semifinal match. 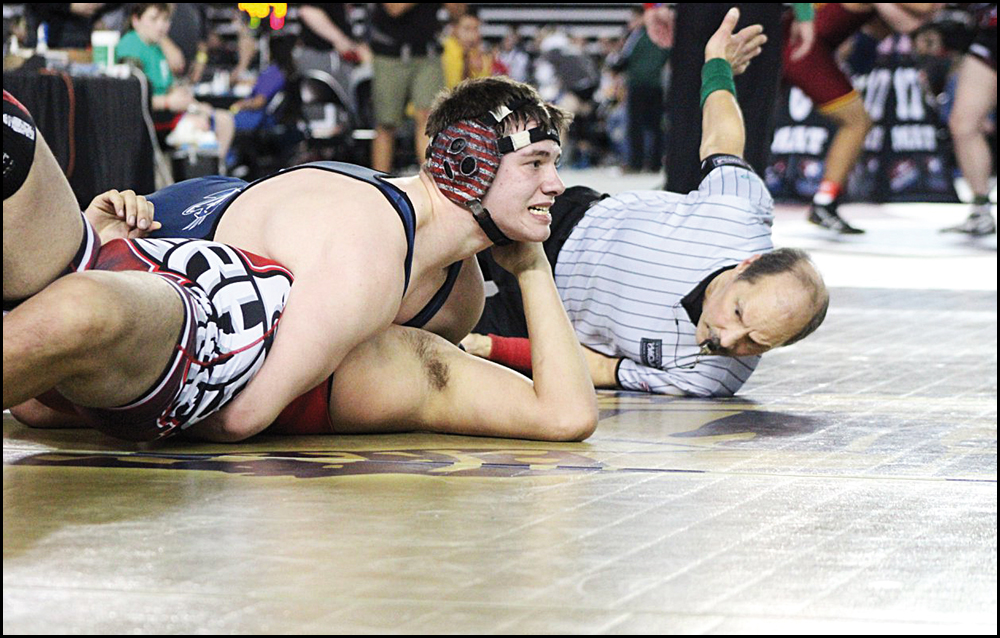 Krouse’s goal, of course, is to be a four-time state champion. He will be competing in tournaments throughout the country this spring and fall to accomplish that objective. Only Jamie Webber (1980-81) and Seth Weatherman (2001-02) have been two-time Chewelah state champions.

“I beat Sasse 4-1 at the Tonasket tournament earlier in the year so I knew what to expect,” said Jeanneret. “So, going into the match I felt pretty confident I could get him as long as I wrested my match. I felt pretty strong, and as the match went on I was able to realize ‘This is my match if I stay smart and kept going’. I put him on his back with a cradle in the first round and did it again in the second round with a tilt, but I couldn’t pin him. But, after my first takedown I realized this is my title. Then when I put him in the cradle it was all mine. After I won, it was amazing—just that feeling you get when you are a state champion is awesome. 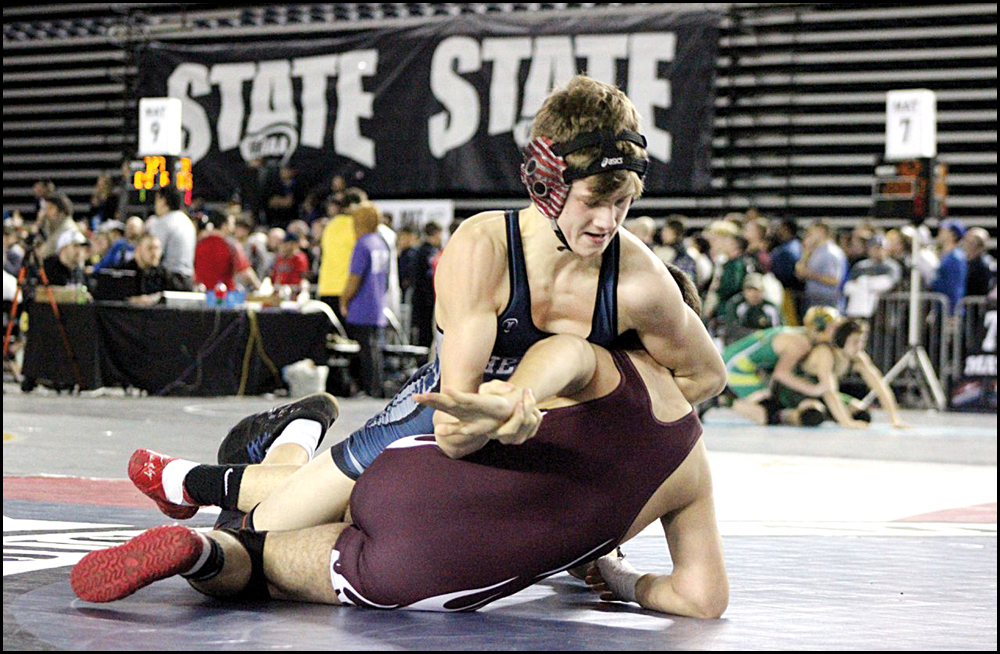 “Going into the season my goal was to place in the top three in state. With my experience from last year, I was just remembering what it was like to place. I knew what to expect, but with not as many nerves for sure. I knew I was ranked number one, and it was a surprise at first, but then it came time to go and I could tell I could win the tournament.

“Kaden and I had a good plan and he really helped set me up for a title. He stayed at 182 pounds as long as he could and people figured he was going to stay there, so they all ran from him, which left me a huge path to the title. Being able to watch Kaden take the title just made me feel great. I was more nervous for Kaden than my own match. Yeha, I thought about my match, but Kaden is my brother and it was important to me that he needed to win his second state title.”

Jeanneret pinned his first two opponents on Friday. He was ahead in the scorebook 6-0 when he pinned Jacob Martin from Raymond with 1:32 remaining in the second round. He then pinned Angel Sandoval Vel from Mabton just 21 seconds into the first round and outscored Jacob Sullivan from Life Christian Academy 9-3 in the semifinals with a takedown, two reversals, and a two-point near-fall.

“Jake is a great kid,” said Coach Slater. “He works hard, has a good attitude, and is a great leader. His strength is his refusal to accept excuses or a way out. He hits every challenge head on. There’s no easy way, and Jake knows it. He won by outworking his opponents, plain and simple.”

Acosta and Crockett both won four of their five matches to place third in their respective weight divisions. Acosta won his first two bouts in the 120-pound bracket, pinning one in 2:45 and advancing to the quarterfinals to pin the other in 4:00. His lone loss came in the semifinal round, where he lost a narrow 6-4 decision to the eventual state champion Colin Silverthorn from Tonasket. Acosta, a sophomore, then completed his quest for a medal with an 18-4 major decision and his third pin of the tournament. Silverthorn won the state title with a pin in the championship finals, so, by comparison, Acosta was the second-best 120-pounder in the tournament. He brought home a seventh place medal from last year’s tournament.

Crockett earned the third place state tournament medal in the 126-pound weight division with a 2-1 decision in the consolation finals. Like Acosta, this rookie freshman won his first two outings on the mat with a first round pin and a 3-0 win in the quarterfinals. He battled through the consolation bracket with a pin in 1:41 and then the 2-1 victory over Tyler Barlass from Rainier in the clash for the third place medal. 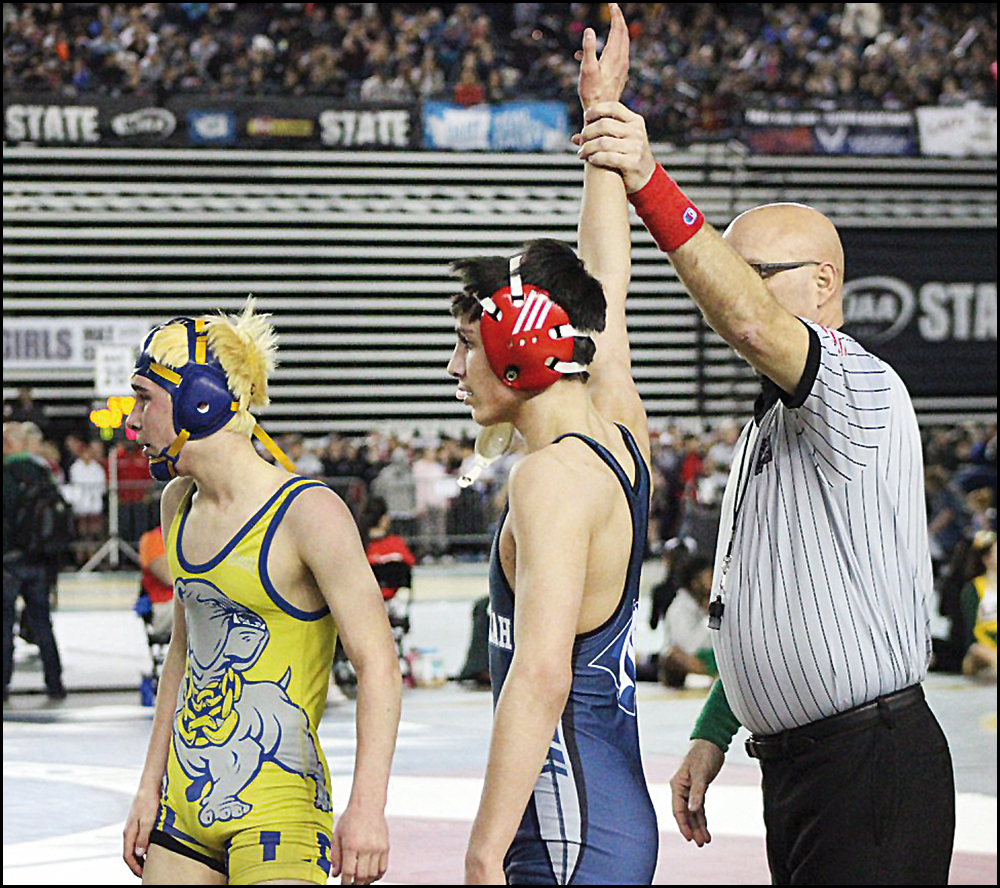 “I scored a takedown in the first round and he got an escape in the second round,” Crockett said. “I then controlled him through the third round and didn’t let him score.”
Baker fought an uphill battle from start to finish in the 285-pound bracket. After losing his first match on Friday morning, the Cougar senior had to win five consecutive bouts to earn a spot in the consolation finals for third place, but he was definitely up to the challenge. He pinned his next four opponents, two in the first round and two in the second, among which were three ranked heavyweights. He pinned fourth-ranked Christian Anderson from Raymond in the consolation semifinals and then outscored third-ranked Will Hahn from Almira-Coulee-Hartline in a high-scoring 11-9 donnybrook for the third place medal. Baker had to fight his way out of some vulnerable positions in the second round, but he battled back into the lead in the final round for the two-point victory, six straight wins, and the third place medal.

Davis won four of his six matches on the way to a fourth place medal in the strong 195-pound weight division that turned into a meat grinder. He pinned his first opponent on Friday, but lost in the quarterfinals later that afternoon. The Cougar sophomore then won three bouts in a row, of which two were over ranked opponents. He defeated third-ranked Chase Flynn from South Bend by an 8-6 score in the consolation semifinals but then lost 6-1 to fourth-ranked Steven Flowers from Lake Roosevelt in the battle for third place. If a vote was taken, he would probably be Chewelah’s most improved wrestler.

“Cole battled through a seriously tough 195-pound bracket,” Slater explained. “The way he showed up with a winning attitude and fought so hard in every match was spectacular.”
Smith completed his senior season with a state medal. After outscoring David Brashear from Columbia (Burbank) 7-4 in the quarterfinals, he was beaten by Kalama’s Abram Foreman in the semifinal round. On Saturday morning, Smith won two bouts by a pin and a 12-4 major decision. However, the Cougar 152-pounder was defeated in both of his last two matches to finish in sixth place.

“Success breeds success, so we’ve got to keep this train rolling,” concluded Slater. “Hopefully, the success we’ve had this season will be a good recruitment tool, and Cougar fans will see that wrestling is our town’s most successful sport.”

Congratulations to the Cougars and their coaches!