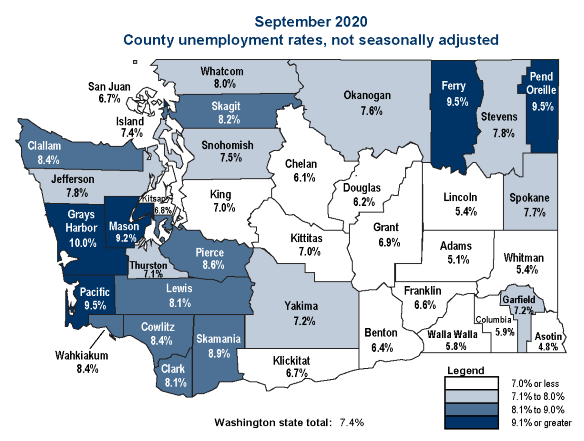 After a big spike from the COVID-19 pandemic, Stevens County has seen its unemployment rate drop to roughly pre-virus levels, with the Employment Security Department reporting the county’s rate for September at 7.8 percent. This is the lowest the unemployment rate has been since March when it was 7.7 percent.

It is, however, higher than 2019’s September unemployment rate of five percent.

Still no additional stimulus bill has been passed by Congress.

Job growth was strong in the summer months, In May, June, July, and August, Washington added an average of 82,525 jobs per month. In September, however, the state economy added just 2,400 jobs. Economists say initial job growth was fuel by the $600 federal unemployment benefit which expired in July. Still, Washington has one of the most generous unemployment programs in the nation.

In Stevens County, over 1,400 people are receiving jobless benefits. According to the state’s economic recovery dashboard, with the unemployment rate going down it appears Stevens County has seen a cumulative loss of roughly 700 jobs since the beginning of the pandemic. The county has over 45,000 people.

Economically retail sales are actually up by one percent or one million dollars, but basic food aid programs have seen a ten percent increase as well. Credit card spending in Stevens County is up 16 percent.

In NE Washington, Ferry County has an unemployment rate of 9.5 percent as does Pend Oreille County.