Wellpinit got off to a bit of a slow start this year with an 0-3 record, but has since evened their mark at 3-3. For two straight games the Redskins running back, Smokey Abrahamson has been on an absolute tear running for 200+ yards each mark.

This week, he is our fantasy football champ with 54 fantasy points thanks to 228 yards rushing, four rushing touchdowns, 50 yards passing, one touchdown pass and scoring a 2-point conversion. Also since his name is Smokey, it makes this whole thing like 1000 times better. Is there a better running back name? You can make so many “Smoke Monster” references for the people old enough to remember the TV series “LOST.” You can also make terrible, terrible article leads like “Wellpinit must be on fire because their running back’s name is Smokey” or “When there is Smokey, there is a touchdown.”

Wellpinit has a big game tonight at Republic where they can get the inside track on third place in the league. Kickoff is at 7 p.m.

Jay Link almost won his third Stevens County Fantasy Football Championship after passing for 236 yards against Springdale in a 62-0 victory. He notched a whopping 45 fantasy points after also throwing three touchdown passes, rushing for 103 yards with two ground TDs and scoring one two-point conversion. This on an “off night” where the Springdale defense did kind of harass the Selkirk offense and did play decent downfield coverage.

Hate to play Jay Link on an “on” night.

Also from the Selkirk roster, Ty Taylor put himself in a workman-like 32 points and scored one of the fastest fumble-recover touchdowns I’ve seen in the 1B’s. Taylor notched 32 fantasy points after rushing for 107 yards, notching 23 reception yards, having a reception TD, four two-point conversions, and the fumble recovery for the touchdown.

Selkirk hosts Northport tonight, thanks to the efforts Leon Zimmerman. Some numbskull decided to vandalize the football field with their truck, but Zimmerman’s tireless efforts restored the field to at least be playable. Selkirk goes for their sixth straight win tonight at 7 p.m.

In Chewelah’s 50-6 victory over NE 2B North foe Kettle Falls, the Cougars had a short field most of the time and the defense or special teams scored a bulk of the points. Still that didn’t stop Kaden Krouse from notching 24 fantasy points.

Krouse rushed for 46 yards and a touchdown, while catching a 23 yard touchdown pass, and returning a free kick 64 yards for a touchdown.

Jake Jeanneret had two touchdown passes in the match-up but they were two short passes.

What does this all mean fantasy wise? It makes me think we need to figure out how to count return yards, but getting every return stat is much too hard to do in the world of high school stats. I think Chewelah’s fantasy numbers would be higher if the bulk of the return yards.

Malcolm does it again as Northport challenges Cusick

Cusick is undefeated in NE 1B North play, but that mattered little to Northport. While Cusick won, they escaped the game by the skin of their teeth. A large part of that was a passing performance by Tanner Malcolm.

He passed for 232 yards, three passing touchdowns, 20 rushing yards and two two-point conversions for a total of 27 fantasy points.

His favorite target, Ty Williams had 122 reception yards and two TDs for 24 total points while running back Jahsom Rahif had 30 rushing yards, 70 receiving yards and one touchdown reception for 16 points.

They’ll play in Selkirk tonight and while the Rangers are one of the best teams in the state, Northport seems to be playing just fine against bigger opponents.

Sam Anderson continues to show just how versatile he is from the quarterback position. The Colville signal caller has been putting in under-the-radar but still important and impressive performances all season. He had one of his biggest games in win over Newport last week.

Anderson rushed for 106 yards, two rushing TDs, passed for 166 yards and two touchdowns. That is a whopping 36 fantasy points.

These three guys need to be called Colville’s “Big Three” and there needs to be a PR photo of them carving up the NEA League for the Allies after defeating their latest foes.

Yeah I just made a World War Two joke. It’s tough to come up with material eight weeks in!

Along with this, I feel like Colville should play homage to their great connection to the timber industry and break out a new mascot. They should get a “Stanford Tree”-like mascot to run around the field. The Stanford Tree is in trouble like every season for doing one thing or another because it’s usually a student inside the costume and college students don’t have the best judgement.

But trees are quite common around Colville, so this absolutely perfect. How great would it be if this guy is stumbling around the sidelines? 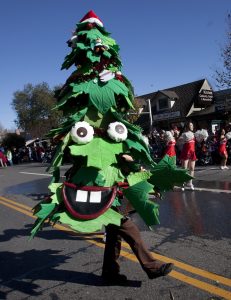 Get Vaagen’s to sponsor the suit. I’m sure they’d love a tree running around a football game. Or maybe someone could dress up at the big crane?