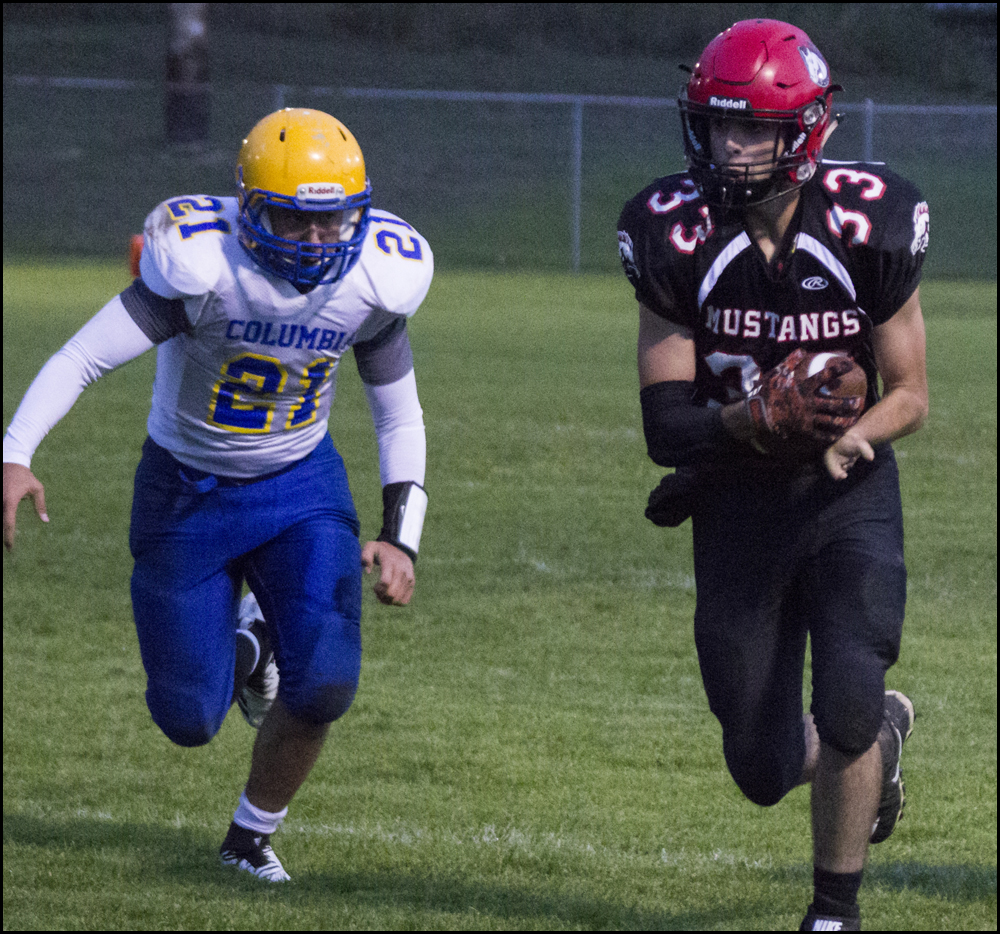 Ty Williams was a force in Northport’s passing and running game against Hunters last week.

When this high school fantasy football game was invented by Aaron Van Tuyl back in Centralia, Wash. all the games were 11-man football and players would win one week or another with 30-point performances, sometimes even crest into 40 points.

With the fantasy game finding its way over to Stevens County and its bevy of 1B, eight-man teams, we’re having trouble keeping track off everyone’s points because this version of the sport is a statistical smorgasbord. Not sure what it is about NE Washington but we’re legitimately breaking the system as employed.

(Which is: One point for 10 yards rushing or receiving, one point for 25 yards passing. Six points for a touchdown catch or run – including fumbles, kickoffs and interceptions ran back for scores – and four points for a passing TD.)

Live look-in of the Northport offense after two weeks of play.

Northport’s Ty Williams is our second week champion after the Mustangs’ QB Tanner Malcolm won the first week’s championship. He posted a ridiculous 52 fantasy points in Northport’s 62-28 victory over Hunters last Friday and helped his team to the first 2-0 start in school history.

Here is our interview with Ty after his big game.

Northport’s offense is humming right now through two weeks. Williams was able to rush for 190 yards, score three touchdowns and then post 92 reception yards with another touchdown. He played both ways and I really want him to wear a fitbit next game to see how far he actually runs. I’m guessing it’s a half marathon every darn 1B game. 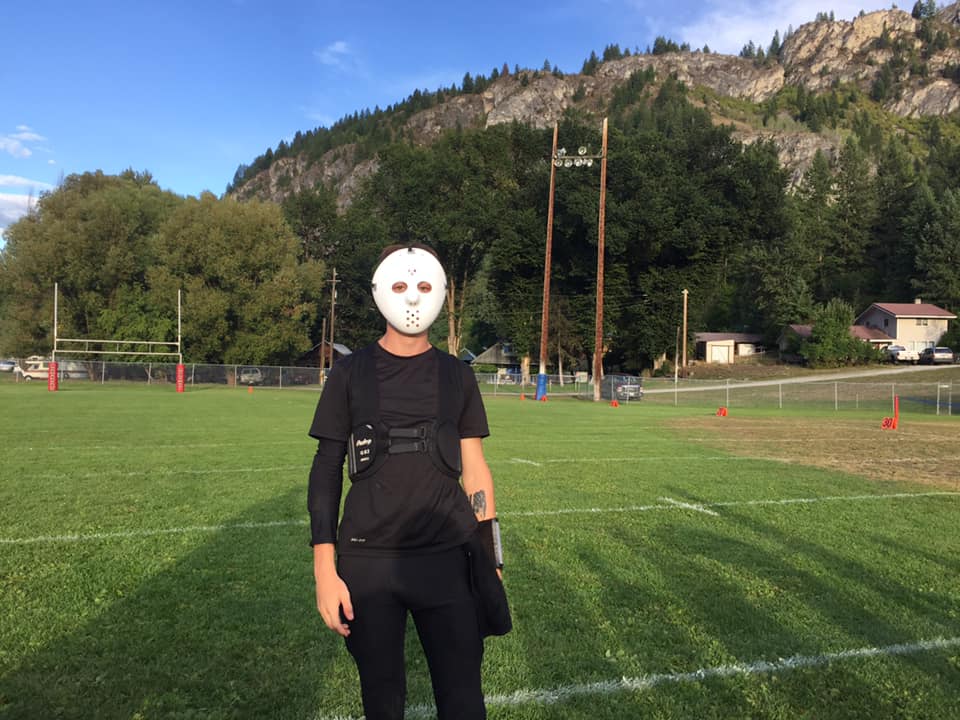 Yes we’re giving out “trophies” for Fantasy Football this year.

Also lets not forget about Northport runningback Jahsom Rahif. Boy does this kid hit hard, while doing everything. I think he hit me hard while walking to the sideline to get a water bottle – but I bruise easy so its okay. He finished with 22 fantasy points after 100 rushing yards and two touchdowns.

On the other side of the field, its obvious that Hunters is going to be a test for some defenses. They have some talented kids including QB August Wagner. The senior rushed for 113 yards and scored two touchdowns for 23 fantasy points. He has the spin move from hell and seemingly nobody can tackle him within the first ten yards from the line of scrimmage.

Solomon Christen, who is no stranger to fantasy football and was a winner last year, notched 12 fantasy points for 100 passing yards and two touchdowns.

Newcomer Dylan Young, who is a freshman, notched 20 fantasy points for Lions and GOODNESS, the kid is fast. He’s so fast I didn’t see him until after he made it into the endzone twice against Northport. He cause two touchdown passes and had 85 reception yards in Hunters’ first game.

Northport hosts Republic this week in a real test of their team as the boys from Ferry County have turnout numbers in the 20s, while Northport has around 12 healthy kids on the roster. Hunters will host Curlew on Friday at 3 p.m. 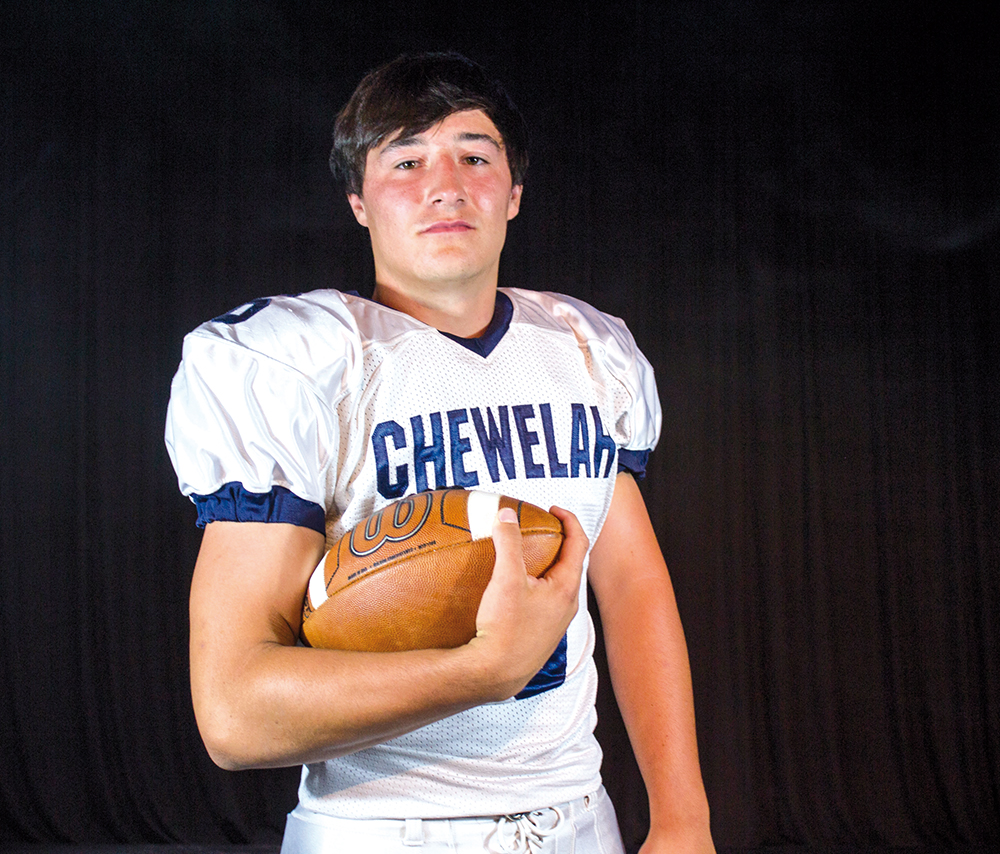 Jake Jeanneret is passing his way into Chewelah record books.

Jake Jeanneret for Chewelah is ridiculous. He’s quietly going down as perhaps the Cougars best QB in school history with his stats, and we’re like “WiLl ChEwElAh HaVe WhAt It TaKes?” because they are 0-2 and we didn’t look at the schedule in the preseason and realize whoever was writing up Chewelah’s schedule was trying to get the school onto the NCAA Div. I National Playoff committee’s radar.

You want to see what the playoff bracket for 2B and 1A football will be this year? Look at Chewelah’s schedule, all the teams are on there.

Jeanneret scored 24 fantasy points with 184 passing yards while rushing for 74 more and scoring two touchdowns. He has been responsible for the bulk of the Cougars’ scoring this year and I am going to give him 20 more points because he says he watches a lot of “The Office.” Any man that watches the office deserves more fantasy points. Unless his favorite character is Ryan, then he is dead to me. 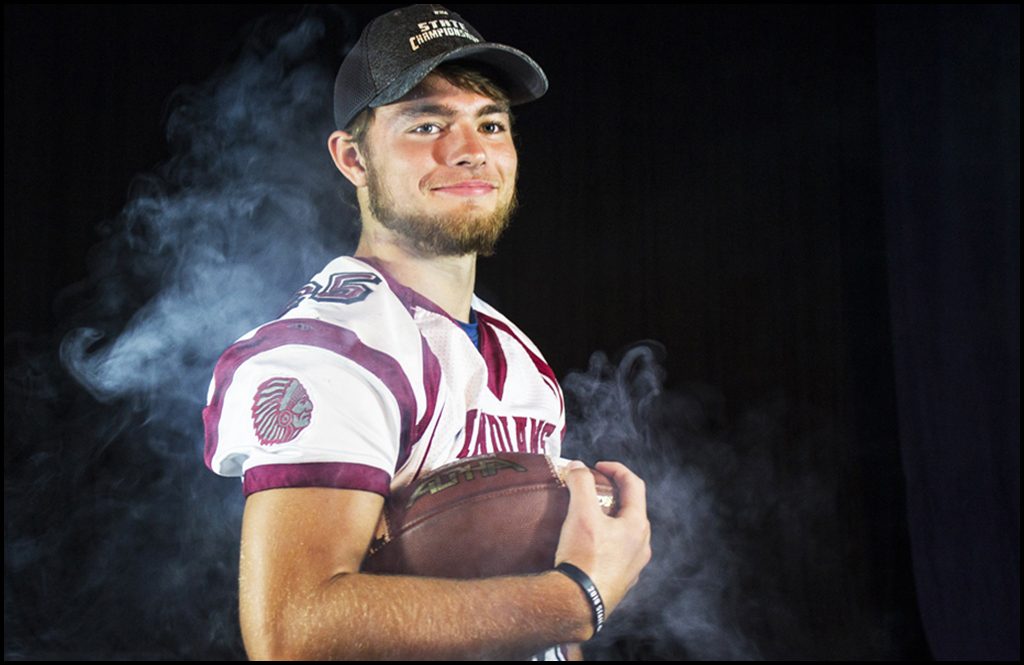 This is the 100th time we’ve used this photo of Grant, who wears a state championship hat to a photoshoot which shows how gritty he is.

You know who strikes me as the kind of guy that drives a Ford Ranger? Grant Michaliszyn. He’s a hard-nosed running back that just powers forward on runs and is seemingly all over the field. This week in Colville’s 28-14 victory over Meridian, he had 109 yards on 20 carries and two touchdowns, along with 107 reception yards.

This in a 1A playoff football-like environment against a quality opponent, Michaliszyn put up a very good 34 fantasy points.

Sam Anderson in his debut at QB for Colville scored 15 fantasy points for 187 passing yards and two touchdowns. I should give him like ten extra points for the way he threw those touchdown passes. He’s a bombs away kind of QB like Patrick Mahomes and is going to be fun to watch all year.

Paul Skirko is quickly becoming the Ron Gronkowski of Stevens County. The Colville receiver is now making a name for himself by making catches and then running over defenders. I don’t think Paul is a Ford Ranger kind of guy, he’s more like a Humvee kind of guy. Skirko scored 14 fantasy points with 88 reception yards and a touchdown.

OTHER TOP PERFORMERS
William Adams for Springdale helped lead his team to a 28-14 win over Curlew. Adams had 86 rushing yards and three touchdowns for 26 total fantasy points. The way the Chargers are approaching eight-man football right now, which include shootouts followed by defensive battles that would make the Chicago Bears blush, make me think coach Mark Edwards is some Doc Brown from Back to the Future tweaking his offense and team to the point where it time travels to the 1920 again and running the Power I was considered the spread offense. Edwards should embrace his old school approach to the game, which works and is getting Springdale wins, and do his best Mike Leach impression the rest of the season. He should write a book about pirates, walk to school every day (Leach literally does this every day in Pullman – which is not a small town), wear nothing but ratty hoody pullovers, and use press conferences to comment on national politics. It needs to happen. 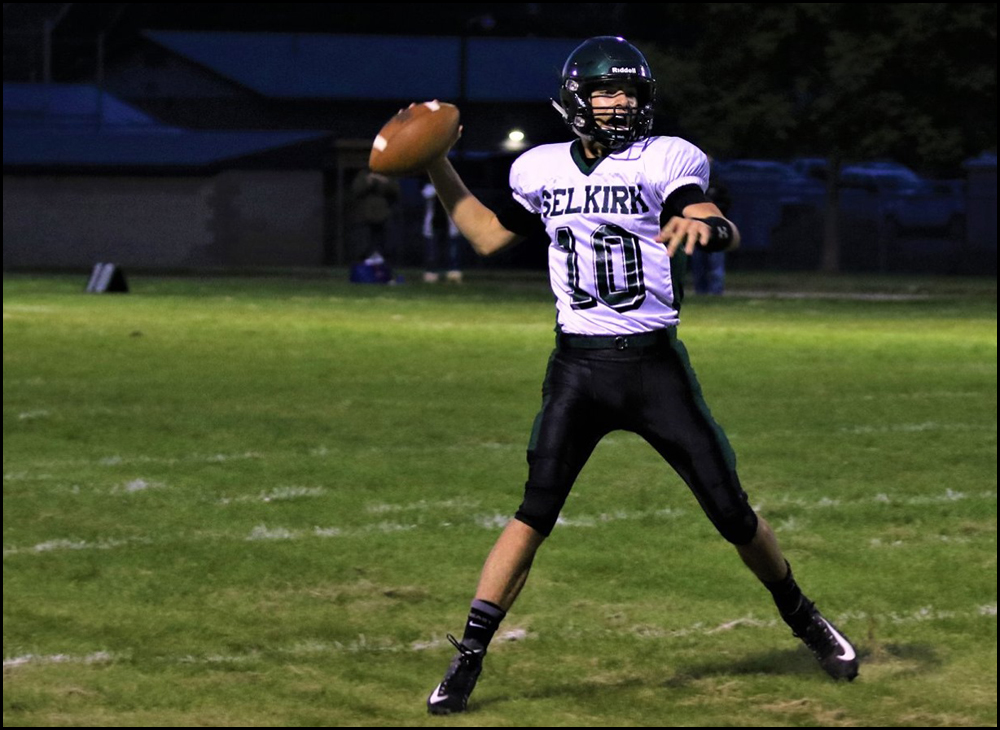 Selkirk QB Jay Link and Chewelah QB Jake Jeanneret (Cousins! People forget that!)  are probably going to be in the top passer spot all year. Link is like our very own Drew Brees in that you just expect him to pass for a ton of yards no matter what. I haven’t seen Brees play in years but assume he is still posting 6,000-passing yard years in the NFL no problem. Link finished this week with 34 fantasy points after passing for 182 yards, three touchdowns, 95 rushing yards and another score. Selkirk won its first game of the year downing Inchelium 80-6.

Ty Taylor notched 23 fantasy points rushing for 110 yards and two touchdowns, while 10 different Rangers scored last Friday. If Fantasy Football were just for teams, Selkirk would win this week with a landslide but they spread the ball around and shared the wealth. With 26-ish kids on the roster, they look like a 2B team not a 1B team.

I haven’t been to Ione, but do they have a Ranger mascot? Like is it just a big park ranger mascot? That is a miss, if you ask me. I think the Selkirk Rangers should use this as their logo. 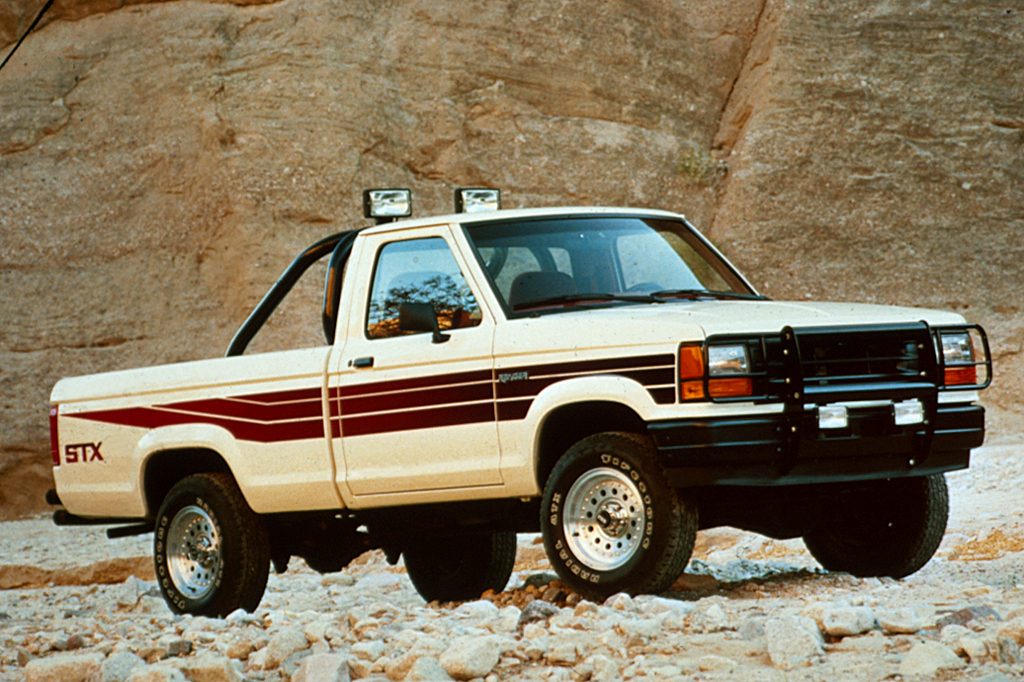 Now that is a RANGER! I think they should all do their homecoming halftime festivities from a Ford Ranger as well. Also have you seen the new Ford Rangers that Ford is putting out again? They look horrible! Awful! If I wanted a Dodge I’d go down to Spalding Pull and Save, I don’t need a Dodge mascarading as a Ford pickup. How can you screw up a beautiful small pickup like this? And here I am ranting about 1990s-style Rangers in a fantasy football column…

‹ CROSS COUNTRY: Kettle Falls sweeps top finishes at St. George’s meet › FROM THE EDITOR: They don’t build them like they used to