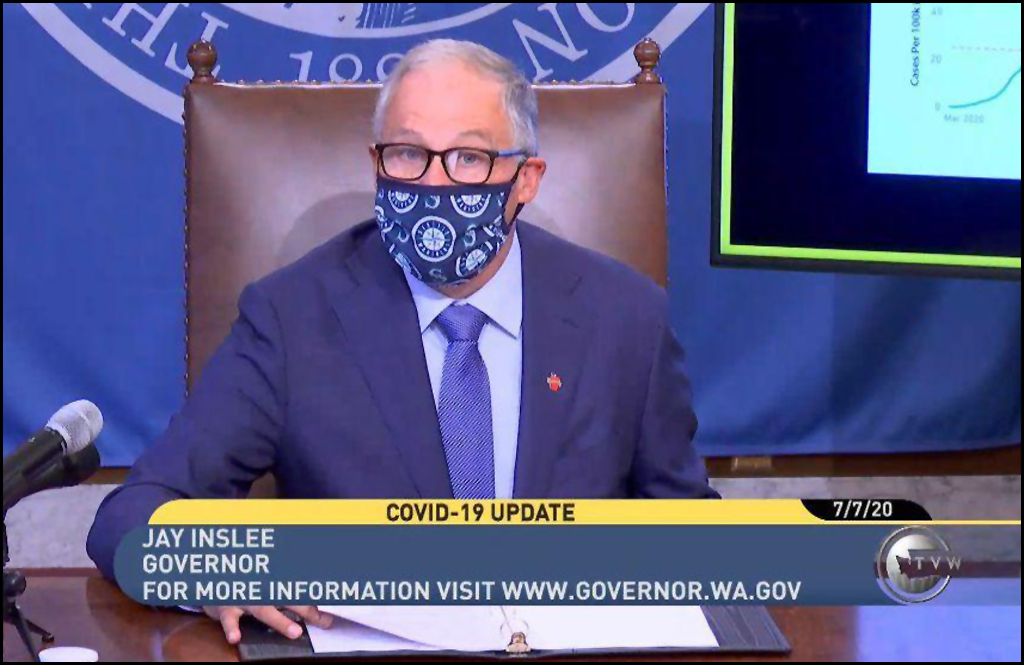 Gov. Jay Inslee on Thursday announced a number of new restrictions on bars, restaurants, fitness facilities and entertainment businesses that are intended to stop the growing spread of COVID-19 in Washington state.

Inslee announced the changes during an afternoon press conference where he cited the increase of cases of the disease in recent weeks as necessitating stricter measures.

Under the new orders, indoor dining at restaurants will be limited only to members of the same household, though outdoor dining was not changed from previous restrictions. Games such as pool tables, darts and video games will be prohibited, and alcohol service must stop at 10 p.m.

The new orders also limit tables at restaurants to five or fewer people and occupancy at 50 percent capacity for counties in Phase 3 of Safe Start Washington. Bars will also only be able to serve patrons outside.

The new orders put restrictions on indoor fitness centers, limiting operations in Phase 2 to five patrons (not including staff) and in Phase 3 occupancy would be reduced to 25 percent indoors.

Indoor entertainment centers such as bowling alleys and arcades would be prohibited to operate, as would cardrooms. Movie theaters would have occupancy limits at 25 percent for counties in Phase 3.

Under the new restrictions, wedding and funeral ceremonies will still be permitted, but not receptions, and with a maximum occupancy of 20 percent or 30 people, whichever is less. The restriction applies to both secular and religious ceremonies.

Inslee’s announcement also came with an expansion of the statewide facial covering order. Washington State Secretary of Health John Wiesman said that masks will be required in “any common spaces.” The health secretary said that included shared spaces in apartment buildings, hotels, dorms, nursing and assisted living facilities, such as elevators and hallways.

“Really it’s pretty much anytime you are out of your house when you are likely to come into contact with some folks that we really want people masking up,” Wiesman said.

Inslee said the new orders would be in place “until further notice.”

The announcement came four months to the day that Inslee had previously announced the state’s “Stay Home, Stay Healthy” order. Since then, the governor said the number of cases increased from more than 2,000 to more than 50,000, and the death toll had risen from 110 to nearly 1,500.

Inslee said the restrictions were “certainly not an attempt to punish businesses,” but were a result of the fact that “our suppression of this virus is not at the level it needs to be to continue to allow more activity,” he said.

Acknowledging the economic hardship further restrictions will have, Inslee also announced the extension of the statewide eviction moratorium until Oct. 15. Inslee said the order included rent increases, adding his staff would convene an informal working group of landlords and tenants to address possible changes to the order should it be extended further.

Inslee said his office through the state department of commerce has released $100 million in federal CARES Act funding to assist low-income renters, supplementing $300 million that had been distributed to local governments for broader aid. A method to distribute those funds was “in the works” as of the press conference, the governor said.

Regarding the mask mandate expansion, Wiesman pointed to data from Yakima, where the local public health district was reporting a 95 percent mask compliance rate, “and now they are seeing a sharp decline in their new cases.”

“This is really, really great news for them and the state,” Wiesman remarked. He said that while some residents may feel fatigued from adhering to the number of restrictions in place, it was a necessary step in order to rebuild momentum lost when counties began opening back up.

“We know many of us are tired and wish we could go back to the way we lived before the pandemic,” Wiesman acknowledged, “but that is simply not the situation we are in right now.”

“We know that fewer, shorter and safer interactions are absolutely crucial in this fight,” Inslee said. “We know that staying home is the safest, but if you go out you need to keep it quick, you need to have distance, and you need to wear face coverings.”

Though he mentioned that defying the new orders could constitute a misdemeanor, the governor did not indicate enhanced enforcement would be undertaken.

“We are not going to bring in the helicopter troops to parachute into people’s backyards. We can’t do that, and we shouldn’t do that,” Inslee said. “What we should do is ask Washingtonians to be part of this joint effort to not infect people who are your friends and your loved ones.”

Inslee spoke specifically about younger residents, a segment of the population that has made up a greater share of new cases in recent weeks.

“If you’re 25 and you’ve been invited to go out to a friend’s house when you know there are going to be plenty of your buddies there and you’re going to hang for a few hours, there’s probably nothing more fun in life … I get that. But there’s probably nothing more dangerous right now,” the governor pleaded. “If more young people will accept this sort of responsibility, fewer of your parents will die, because you won’t get infected.”