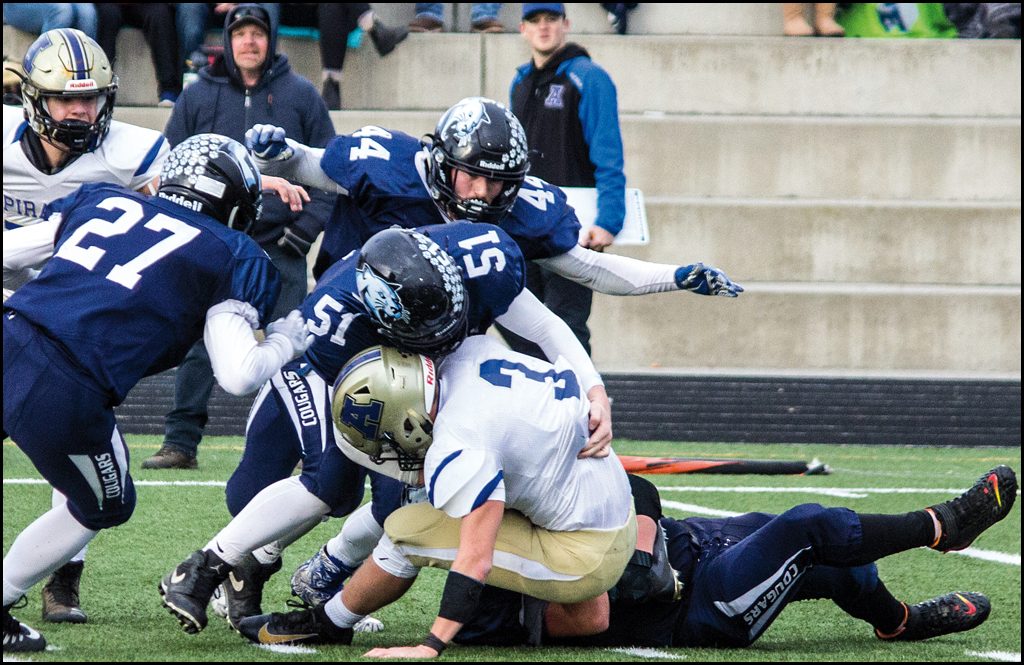 A second straight superb Chewelah football season came to a close at Gonzaga Prep in Spokane last Saturday afternoon when the Cougars lost their state tournament quarterfinal encounter 35-13 to the visiting Adna Pirates. It was the end of a lemons to lemonade season for the Cougars who began their season with four losses in five outings and then won six consecutive games to reach the second round of the state 2B tournament.

Cougar quarterback Jake Jeanneret completed 13 of 31 passes for 196 yards with two touchdowns, but the Chewelah defense that had been so stingy throughout the second half of the season was unable to contain the Adna running attack that produced 236 yards on the ground. The Cougars trailed only 14-7 at halftime, but the Pirates pulled away with three more touchdowns after the break to take home the win. Adna will now face Onalaska in an all-west side semifinal round at Centralia this Saturday. Napavine will meet Kalama for the other ticket into the 2B championship game. All four teams are from the Central 2B League.

“We were the only team to score in the quarterfinals against a team from Adna’s league, which was one positive thing we can say about this game,” said Coach Cameron Gump. “Napavine beat Toledo 55-0, Onalaska beat Tri-Cities Prep 50-0, and Kalama beat Lake Roosevelt 35-0.

As Adna’s Coach K. C. Johnson said after the game, “We’re happy to be in the final four. We have great respect for all three of those programs going into the semifinals. The best four teams in the state are still playing, and we get another shot at Ony (Onalaska).”

Chewelah trailed by two touchdowns 14-0 before Jeanneret connected with Nick Franks for a six-yard touchdown pass to cut the Pirate lead to 14-7 at intermission. The Pirates put three more touchdowns on the scoreboard in the second half for a 35-7 lead, but Jeanneret threw a ten-yard pass to Jaron Baldwin on the final play of the game to end scoring at 35-13.

“The outcome of the game came down to physicality,” said Gump. “We played a good first half against them, but after halftime we no longer had the strength to compete with them. They were simply tougher and stronger than we were. After all the Adna film I watched, I did not expect them to be as strong as they were. I thought we played pretty well defensively, but our defense was on the field far too long because we could not stop their running game.

“I have listened to a lot of podcasts about Adna and the other top teams from their league, and the difference between them and us is that they spend more quality time in the weight room. Adna’s kids, according to their coaches, live in the weight room all year long. We are right there with our skill level, but we have to get stronger to compete with them in the future.”

Although the Cougars threw for nearly 200 yards, they could not establish a running attack, finishing with only 26 rushing yards against a stone wall Adna defensive front. Chewelah’s backfield duo of Jeanneret and Kaden Krouse was unable to find running lanes against the Pirates. Jeanneret had seven carries for 12 yards and Krouse had five carries for 11 yards.

“They really loaded up on us.” said Jeanneret. “We expected them to play a much looser defense against us, but instead they put seven players in the box and came after us on every play. They had a solid front and good linebacker flow to the football. They pretty much kept us from running the ball and forced us to throw more.”

“For us, this was a case where little things made a big difference in how we played,” Gump added. “We made small mistakes like offside and motion penalties that kept us from moving the ball.”
Unable to run the ball, Chewelah went to the air to score both of its touchdowns. The catch by Franks put the Cougars on the scoreboard in the first half. Baldwin’s 10-yard grab late in the game provided the other touchdown. Baldwin finished the game with six catches for 89 yards to lead Chewelah receivers.

On the other side of the ball, Adna runningback Cole Fay had 22 carries for 134 yards and two touchdowns, and quarterback Braden Thomas had 13 carries for 64 yards and a pair of touchdowns.
Fay scored the lone touchdown of the first quarter on a four-yard run for a 7-0 Adna lead. Fay found the endzone again in the second quarter on a one-yard run to spread the Pirate lead to 14-0.
Jeanneret’s throw to Franks, followed by the extra-point kick from Sam Triplett, cut the Adna lead to 14-7 at halftime.

Adna scored the first three touchdowns of the second half on a 39-yard pass from Thomas to Devon Young, and a pair of runs by Thomas.
Jeanneret’s throw to Baldwin concluded scoring at 35-13.

The Cougars finished with another winning season. Even after losing four games early in the season, they retained their determination, foresight, and composure. The result was a six-game winning streak, a crossover win against Reardan, and a state tournament victory over Tonasket. They ended the season with a 7-4 record, a number four seed into the state 2B bracket, and a number eight ranking. Not bad for a team that started 1-4 through the first five games.

The seniors on this team will be able to brag about playing in two state football tournaments. Hopefully, the juniors will be able to brag about three. The Cougars will lose eight seniors to graduation in the spring—Jaron Baldwin, Jake George, Nic Shierloh, Sam Triplett, Jake Jeanneret, Michael Palmer, Cole Piepgras, and Judah Katona. In the fall, they will return nine juniors and nine freshmen, but only four sophomores. Of these, 10 were starters on either offense, defense, or both during all or part of the season.

‹ 2B FOOTBALL PLAYOFF PREVIEW: Everybody in Chewelah is asking where the heck Adna is › Springdale seniors selling wreaths as fundraiser