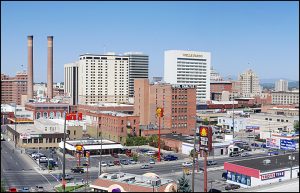 After recent protests in wake of George’s Floyd’s death in Minneapolis, armed citizens have also begun showing up and saying they’re protecting businesses. Spokane has seen several armed citizens and on Thursday, numerous elected officials condemned their actions in a joint statement, reports the Spokesman-Review

“Their presence did not contribute positively in any way to the protest,” the statement reads. “In fact, their presence made the situation more tense and our city more dangerous for all involved.”

Armed citizens who have talked with police are saying their trying to protect businesses from looting and possible rioting. After protests flared up two weeks ago, Spokane law enforcement agencies released statements saying they asked armed militia people to leave and that they weren’t positively affecting the situation in the downtown area.

Downtown business owners also expressed their displeasure at having armed people in front of their storefronts and in parking lots. The Spokesman-Review quoted Auntie’s Bookstore owner John Waite saying having militia members downtown was not conducive to business and asked city leaders to condemn their presence. The Globe in downtown Spokane also posted a statement saying they stand with Black Lives Matter and did not ask for militia precense outside its doors.

Many armed citizens said they were asked by businesses to stand guard.

“They have come in response to the powerful, peaceful protests that have taken place in downtown Spokane. Video footage reveals their malicious intent to agitate, disrupt and intimidate. We have no affiliation with these individuals nor do we condone their activities,” The Globe said in the statement.

This week the Stevens County Sheriff’s Office had to respond to rumors swirling around the county that ANTIFA was going to show up in the largely rural county and begin causing issues. The evidence of ANTIFA causing issues during protests is scant, and the Associated Press reported that most arrests during protests across are local people. The Stevens County Sheriff’s Office said that they have no evidence that ANTIFA is operating or planning to operate in Stevens County.