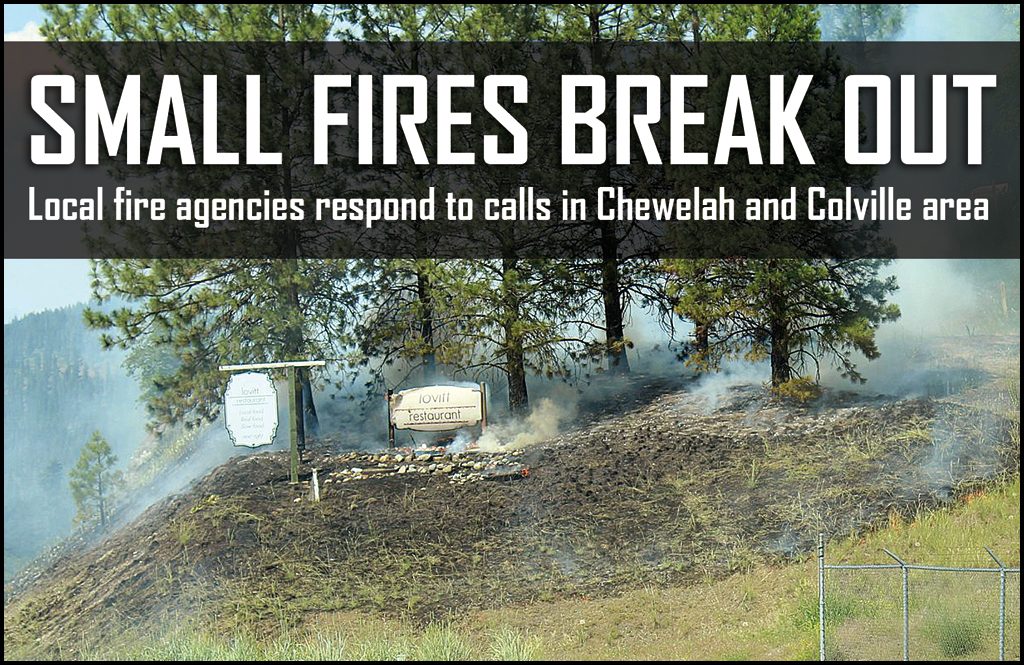 Fire burns around signs just before you get into Colville. (Jamie Richardson photo)

BE ALERT, BE SAFE: Fires can start easily from most causes and small fuels in these conditions…

The Washington Department of Natural Resources has increased the fire danger to “high” in southern Stevens County and many other Eastern Washington counties as things dry out for summer. Local fire districts and departments have been kept on their toes with small fires breaking out around the county.

Chewelah residents woke up on Friday to the news that the fire danger had been raised, only to see a plume of smoke rise near Sand Canyon Road. A small outbuilding had caught fire from unknown causes and, with timber and more houses nearby, the danger of it spreading was great. Quick response from Stevens County District 4, the Chewelah Fire Department and Washington DNR ensured that the fire was essentially kept to a tenth of an acre.

On Sunday, a grass fire was reported on both sides of Mantz Rickey Road just south of Colville. While the fire was perhaps the most visible to traffic on Highway 395, no structures were threatened, and it was held to two acres.

These were just two local examples of what can happen in a hurry. Thanks to local firefighters, these blazes were controlled early, but things will only get drier as the summer goes on.
When fire danger is high, fires can start easily from most causes and small fuels such as grasses and needles will ignite readily. 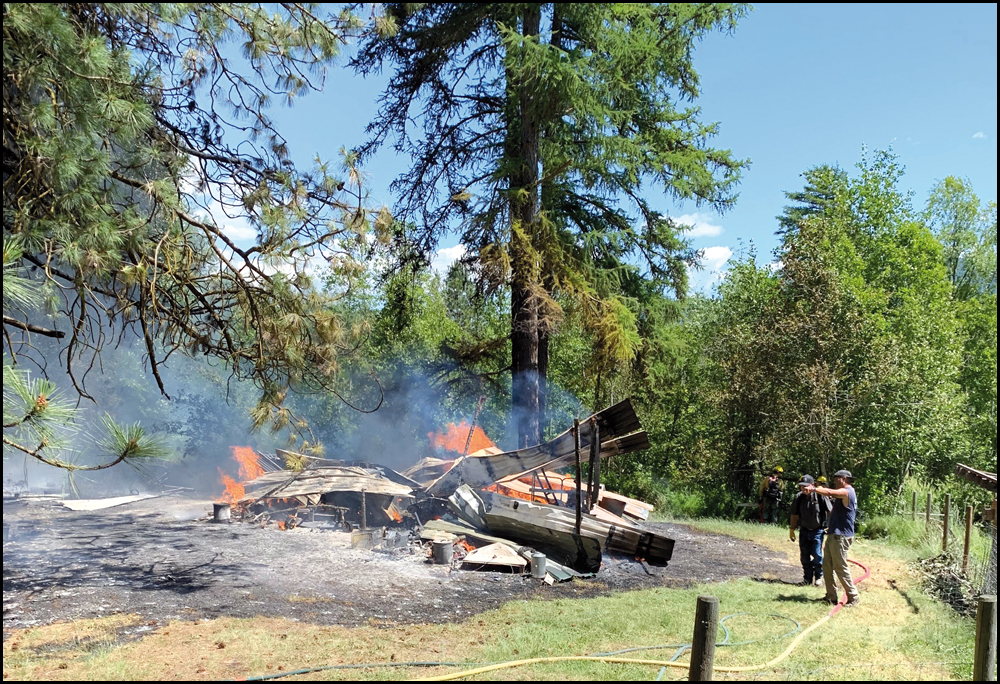 This outbuilding fire created a plume of smoke near Flowery Trail Road on Friday but was quickly controlled by fire crews. (John White photo)

What does that mean? It’s that time of year where you can’t leave any fire unattended. Left alone, campfires and brush fires are likely to escape, and under these conditions fires will spread easily. Some areas of high-intensity will be slopes or concentrated fuels. Fires can become serious and difficult to control unless they are put out while they are still small.

When living in wildfire season in Washington, make sure you stay alert and aware of fires in the area. The Tri-County Fire Danger Group can be a good resource at facebook.com/groups/1447028895568855/

Other tips include:
-Place your emergency supply kit and other valuables in your vehicle.
-Move patio or deck furniture, cushions, door mats and potted plants in wooden containers either indoors or as far away from the home, shed and garage as possible.
-Close and protect your home’s openings, including attic and basement doors and vents, windows, garage doors and pet doors to prevent embers from penetrating your home.
-Connect garden hoses and fill any pools, hot tubs, garbage cans, tubs or other large containers with water. Firefighters have been known to use the hoses to put out fires on rooftops.
-Leave as early as possible, before you’re told to evacuate. Do not linger once evacuation orders have been given. Promptly leaving your home and neighborhood clears roads for firefighters to get equipment in place to fight the fire, and helps ensure residents’ safety.

The Chewelah Independent will also try to provide updates on social media, relaying official information about wildfires at facebook.com/theindependentnews/.