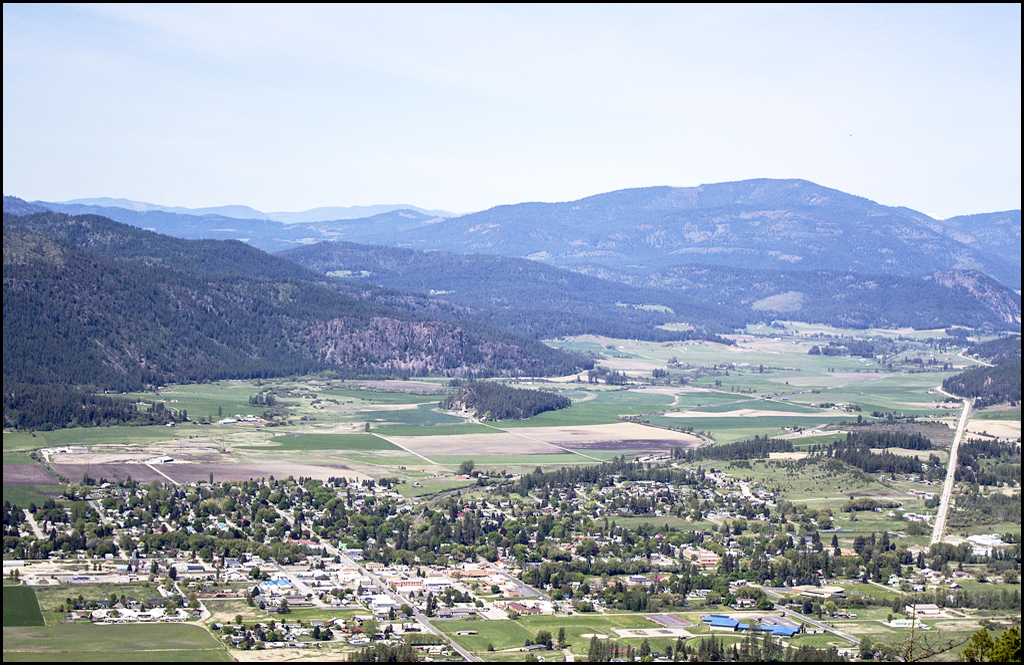 WE CAN ACT NORMAL: … but we aren’t fooling anyone. Even in a pandemic, Chewelah is a unique place to live in Eastern Washington…

Chewelah is so unique, nobody outside of Washington can probably pronounce the name. Despite everybody confusing us with a Star Wars wookie, our town was the fastest growing city in Stevens County since the last census, and it’s easy to see why.

When trying to describe Chewelah, it can be tough. It’s quirky and there is no place quite like it.

So in our annual effort to promote the weirdness of Chewelah, here is our list of reasons why Chewelah is weird.

WE HAVE HAD WEIRDER NAMES FOR OUR TOWN
Before it was known as Chewelah, our town was called Chiel-Charle-Mous on the 1897 U.S. Land Office Map, and it was called Fool’s Prairie at one point as well.
Thankfully we don’t have to have the marketing of the town be “Simply Fool’s Prairie.”

Still, Chewelah has been ranked as the No. 6 silliest town name in Washington.

-The town was once the site of the largest magnesite plant in the country during WW1, which was important for making steel. Chewelah, you could say, was the steel backbone of the nation during WW1.
-Wyatt Earp, favorite lawman of the Wild West, was here at some point. So when you watch “Tombstone,” try and imagine a deleted scene set in Chewelah.

CHEWELAH IS ACTUALLY THE TWIN CITIES
Move over Minnesota, Chewelah is actually two separate city limit areas. Thanks to the Chewelah Golf and Country Club, which has a community considered part of the city, and the city proper, there are two separate boundaries.

It’s so odd, cities can’t do this anymore, but Chewelah was able to get grandfathered in this arrangement before Washington figured it was probably best that cities remain in one piece. So you think our country is currently divided? Remember you live in a town that is actually divided… with a four-mile scenic drive in between.

-Chewelah’s Golf and Country Club has been known to have several additional golfing hazards, including a snake hanging out in a tree, elk and deer. Thankfully, no gators, yet.

OUR TOWN IS COMPRISED OF FARMERS, LOGGERS, HIPPIES, ARTISTS AND POSSIBLY A LOCH NESS MONSTER
Have you seen our valley floor when it floods in the spring? Some farmers have reported seeing a large “Loch Ness” type monster in their fields during this time. This is a legend we have dubbed the mysterious “Chewie” monster. Along with this, we have loggers who live in town, farmers who sometimes come to town to get supplies, hippies who rightfully decided it was time to get away from the city, artists who keep our local culture alive and vibrant and the occasional cryptozoologist.

-Chewelah is so artsy we’re now known as a creative district, while also having our own art gallery (Trails End Gallery) and monthly art walk. Move over Bend, Oregon, Sandpoint, Idaho or Bigfork, Montana, we are way more artsy than you.

THE GHOST GOLF COURSE
Browns Lake used to be the site of a nine-hole golf course for Magnesite Plant employees. It could have been considered one of the more scenic golf courses in the state if it still existed. You’d be hard pressed to figure out where it was now. Everything is grown over. You can still, however, swim at Browns Lake with a private membership.

-You can still see the homes that the old Magnesite pit and plant workers used to live in near Browns Lake. They’re old and abandoned however, so we wouldn’t recommend going inside.

THE DEER USE THE CROSS WALK
We’re not sure why, but the deer are courteous in Chewelah and have discovered how to used the crosswalks. We’re not sure how this fits into the whole biology of a herd animal, but maybe they realized pedestrians weren’t getting hit on the highway when using the crosswalk. We’ve also noticed squirrels are beginning to use the stairs, skunks keep their stink only for the outdoors and quail have exploded in population in city limits.

(Nobody tell the housecats of town that we are wildlife friendly.)

-Chewelah is also known as the “Snipe Hunt Capital of the World” as several Stevens County people have begun their hunting careers here in Chewelah going on a snipe hunt.

FAMOUS PEOPLE ARE FROM HERE
Chewelah somehow has a lot of famous people. No, seriously. While binge watching YouTube, I noticed several people pop up on my YouTube ads that are from Chewelah. First off, Allen Stone is a famous soul singer from our town and needs no introduction – other than perhaps one day he could tell people where he gets his sweet shades. One of the spokespeople for Spokane Teachers Credit Union (STCU) is also from Chewelah. Kumiko Love runs the very popular “Budget Mom” blog, YouTube, Twitter and Instagram where she explains how she budgets everyday and makes smart financial decisions.

The famous runners of Bloomsday spent some time outdoors near Chewelah while they were being fabricated and weathered. David Govedare has been here for decades, and he’s working on his latest project – a bigfoot up at 49 Degrees North.

Between the Rivers attendee and teacher Hazen Audel – who also has a show on National Geographic – also can be seen here from time to time and is a spokesperson for STCU.

Josh Parrish was one of the best lineman in the history of Washington State University during their heyday of the early 2000s.

Meanwhile, famous football coach Herm Pein was not only one of the greatest players for Eastern Washington University, but he was also a west coach boxing champion.

Speaking of EWU, the great Dick Zornes, who led the Eagles to a final four appearance in the FCS football championship, also lives in our town.

[Come to think of it, seemingly everybody from Chewelah goes to EWU. They must get Cheney confused with Chewelah.]

Longtime Chewelah teacher Jeff Kersey created a popular YouTube channel that was featured in the Spokesman-Review.

-Not to mention that the high school is named after Colonel Jenkins who had quite the career during the Civil War.

CHEWELAH HAS ITS OWN PERSONAL SCENIC MOUNTAIN… THAT MIGHT BE SUPERNATURAL
Quartzite IS the tallest thing in town and is about as iconic as Mt. Rushmore or Mt. Rainier. Its distinct rockface is instantly recognizable and unlike anything we see anywhere else.

Chewelah also has a river that flows north (Colville River) and a creek (Chewelah Crick) that flows south.

There is also a pointy nob just south of town that people think is an ancient pyramid and not just a mountain. People also reported strange lights hovering above Quartzite.

-Along with that, the smokestack from the old Magnesite Plant is basically unmissable from anywhere in the valley. Not only does it tower above us, but also puts us in rare company with Anacadona, Montana as being the one town know for its smokestack that can be seen for miles.
-We also have a leaning Grange Silo, so eat your heart out Pisa, Italy!

THE CHEWELAH AREA HAS ITS OWN PRIMITIVE SKILLS GATHERING IN VALLEY
Every year, the Between the River Gathering is a primitive skills event just outside of town near Valley. (Sorry Valley, we’re considering you part of the Chewelah family, too.) If you want to see kilts, guys living in Gypsy wagons, people in buckskin, people smoking and tanning hides, the milking of goats and people flinting new arrowheads, this is all part of Between the Rivers. They recently acquired land by the Valley School and look to be a permanent asset to the area.

CHEWELAH IS THE INSPIRATION FOR HALLOWEENTOWN
Do you ever seen “Halloweentown” on DisneyPlus and go “how quaint, they think their town revolves around Halloween” while you’re quickly scrolling through Pinterest to come up with the greatest Halloween decorations for this upcoming Fall?

Despite the COVID-19 Pandemic, Light up the Park will continue in Chewelah and people will be able to help out with the great event that fills up the City Park with lots of pumpkins that glow brightly.

Then usually, there is BooFest which fills up the downtown area with many costumed kiddos.

-Tremors was a movie that was shot here. Okay that is a lie, but the movie Tremors SHOULD have been shot here.

WE HAVE THE LONGEST-TENURED SPORTS WRITER IN THE NATION…PROBABLY
We didn’t check, but Geno Ludwig has been writing for us since the Ford Administration. Not only this, but he teaches and coaches, while serving as the sports scribe for Chewelah for this paper. We’d like to see Rick Reilly do that while also playing golf with Tiger Woods.

OTHER WEIRD THINGS: City Hall used to be our grade school, and our old middle school used to be the high school. Some buildings in town were moved down from a now ghost town higher up and closer to the mines around here. Nobody has ever caught a bigger fish than John May. Chewelah is closer to Missoula, two states over, than Olympia. Also let’s talk about the town of Valley… it has a rich history, is a little weird and has all sorts of characters we love and consider part of Chewelah.