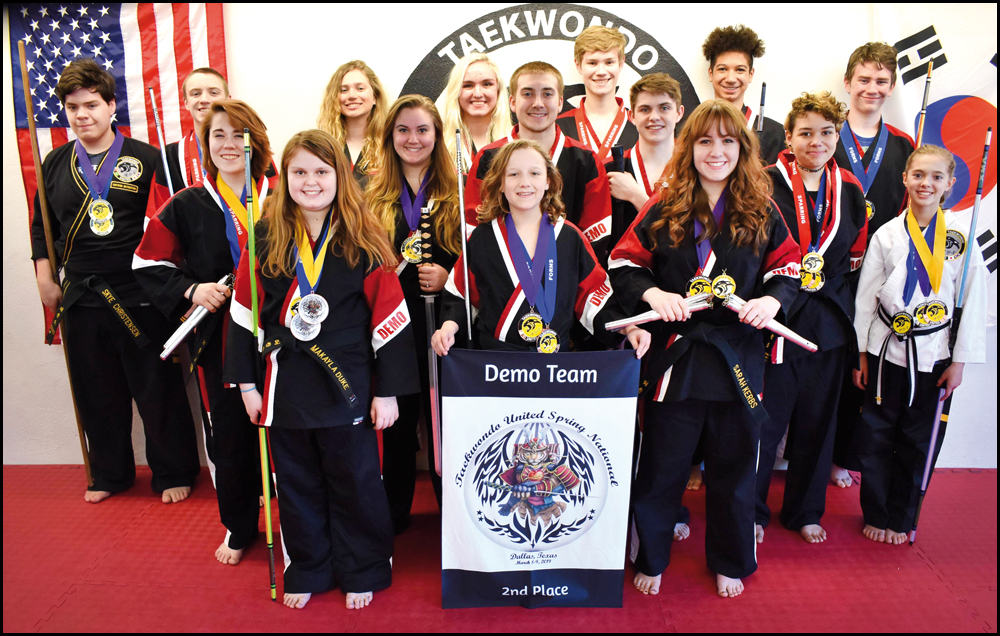 BRADLEY’S GETS THEIR KICKS IN DURING NATIONALS: Demo team places second at nationals, students haul in over 30 medals in tournament featuring over 500 competitors…

Along Main Ave. in Chewelah after the daily hustle has died down, and school has gotten out, they work on their craft.

On some weekends when it would probably be easier to go to the lake or hang out with friends, they’re putting in their reps.

Away from the martial arts studio, they’re practicing at home, in private, working on a form of self defense that has been developing for centuries, beginning in Korea.

Bradley’s Taekwondo has been a school in Chewelah since 2008, and its ranks have steadily grown. This year’s traveling squad was the school’s biggest, and there have been kids that have trained for years.

Bradley’s students traveled down to Dallas, a city of 1.3 million people. They weren’t intimidated by taking on 500-plus competitors at the event for Taekwondo United, the martial arts federation that Bradley’s is a part of.

“All of our students that went to Nationals have been training for years here,” Chief Instructor Sandra Bradley said. “The demo team trains all year to get ready for the March Nationals. Our 2020 team has already started practicing! We have students that are here five days a week training for hours at a time. They are very dedicated to the art.”

Bradley’s Demo Team, which won a national championship last year, finished with a second place finish this year, coming up as the cream of the judged demo team competition which can be a hair’s difference between first and second.

“The demo team did amazing, they made us all proud,” Bradley said. “Then we had some kids like Alexis and Dean who were the youngest in their competition rings but still did an outstanding job.”

“All of our students conducted themselves with good sportsmanship whether they won or lost,” Bradley said. “They were an example to us all.”

“Each ring is run smoothly and every competitor knows exactly when their competition will begin,” Bradley said. “We also had seminars on Friday where the students could learn grappling, Jeet Kune Do, Eskrima and more about sparring. These seminars were an amazing opportunity to learn.”

Skye Christensen tested for and earned his senior instructor certification while also placing first in beginner weapons and first in traditional forms.

Hannah Kerbs was first in beginner weapons and earned a silver medal in board breaking.

“Our students had a great time in Dallas,” Bradley said. “When we take these trips, we try to make sure that they kids see the area and experience as much as they can.”
Bradley’s students went to the Dallas Zoo, where they got to pet and feed a giraffe and learn about mammals. They attended a show at Medieval Times for combat from a different era and continent, along with a trip to the Dallas World Aquarium.

When they weren’t touring, they were competing and competing well. Alea Fazio placed second in sparring, third in Traditional Forms and third in Freestyle Forms. Dean Noe placed third in beginner weapons along with a silver medal in board breaking.

Hans Bakken took fourth in sparring, Alexis Lee was second in beginner weapons, third in freestyle forms and second in traditional forms. Zack Larsen was third in both intermediate weapons and forms while Ursula Bakken won a silver medal in board breaking.

“After the tournament, we stayed a couple days to take more training seminars and then off to the Dallas World Aquarium,” Braldey said. “We also took the kids to tour the JFK 6th Floor Museum across the street from the grassy knoll. The tour was very interesting and I think the kids learned a lot.”

The work isn’t over as now the school will be training for the September National Tournament. As more local students learn about nationals, more want to go.

“What holds a lot of them back is funding,” Bradley said.

But the school holds fundraisers to help offset costs, currently they do Break-a-thons and also have an in-studio fundraiser of chocolate bars and meat sticks.

“We are on Amazone Smile for any that want to help us out there,” Bradley said. “But we are needing corporate or personal sponsors to give even more kids the oppourtunity to experience this. It’s an amazing opportunity for them to see and experience people and places outside of Washington.”

The school is also selling ad space on their t-shirts for their upcoming local Spring Tournament for any businesses interested to help students.

For more info, people can go to Bradley’s Facebook Page at facebook.com/Bradleys-TKD-173832508934

‹ Kirry named Class of 2020 DYW › FROM THE EDITOR: Am I a government shill? Probably