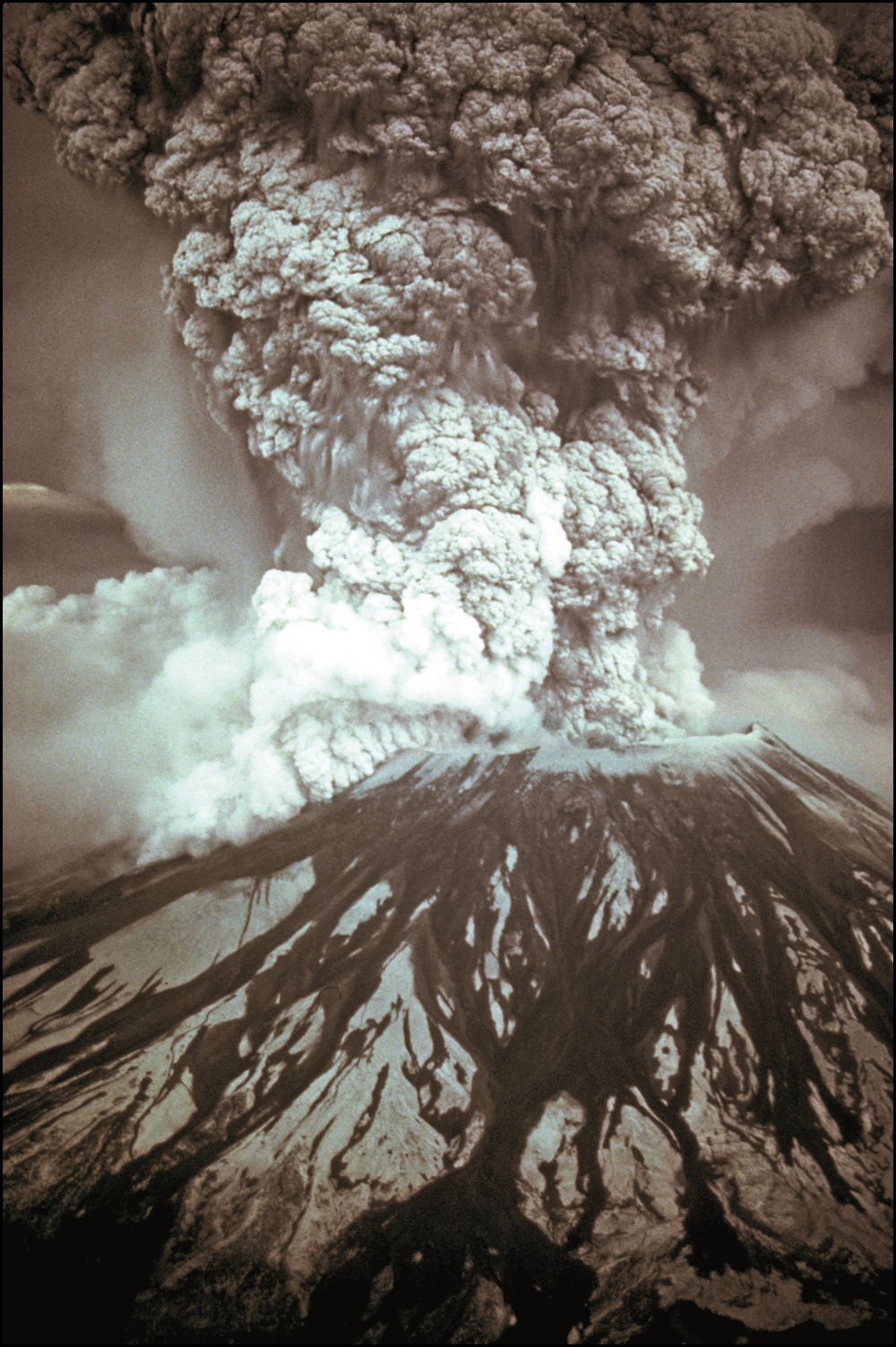 HISTORIC ERUPTION Mt. St. Helens erupted on May 18, 1980 and killed 57 people while also causing $1.1 billion in property damage. It was the worst volcanic eruption in US history and the first since 1915 when Lassen Peak erupted in California. (USGS photo)

“Vancouver! Vancouver! This is it!” 30-year-old volcanologist David A. Johnston said over the radio before the May 18, 1980 eruption of St. St. Helens overtook his monitoring position on Coldwater Ridge.

And thus began the deadliest and most economically destructive volcanic event in U.S. history.

After waking up earlier in the year with smaller eruptions and signs of life, Mt. St. Helens had a bulge grow on the north side that expanded several hundred feet. On May 18, a 5.1 magnitude earthquake below the north side of the mountain triggered the largest landslide in recorded history. This also exposed the volcano’s partly molten, high-pressure gas- and steam-rich rock to explode, putting material 15 miles in the air in ten minutes.

The devastation was almost unimaginable. This beloved area in southwestern Washington that was a great spot for outdoor recreation – not unlike the Colville National Forest – quickly turned into a moonscape. The eruption killed 57 people, destroyed 250 homes, and mudslides moving into river valleys took out 47 bridges.

Johnson was killed and his body was never discovered. Harry Truman, who had gained fame as the owner of a lodge by the mountain who refused to leave, was also killed in the blast. The eruption dropped inches of ash across eastern Washington, with Ritzville getting the worst of it. People donned masks because of health concerns over inhaling the ash.

Chewelah, a seven-and-a-half hour drive away from the mountain, was certainly safe from the immediate disaster – but then it started to rain ash. 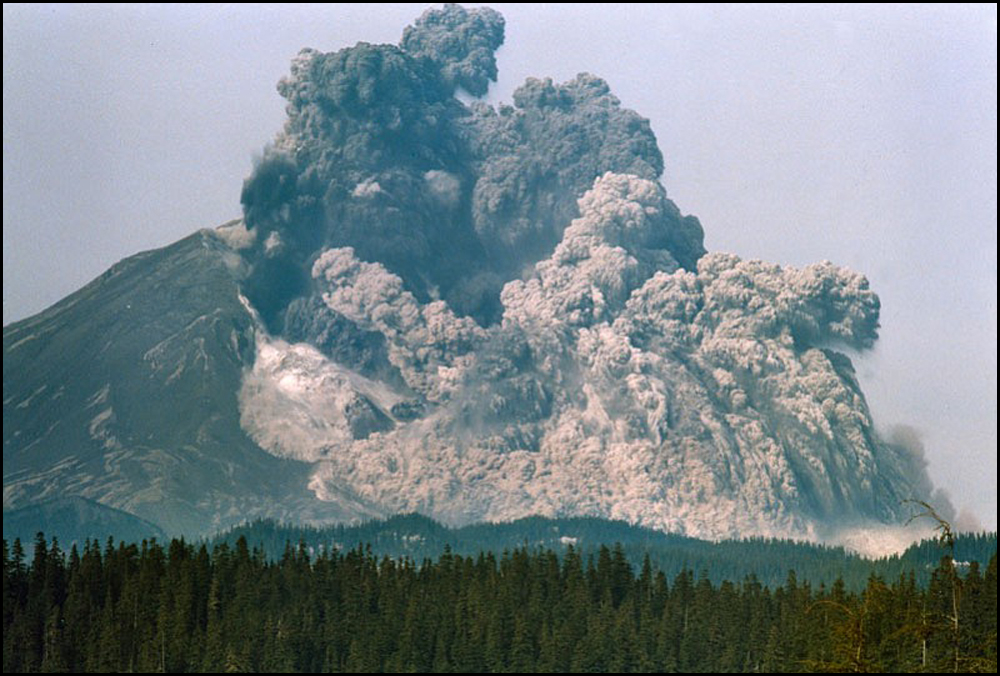 An earthquake on May 18, 1980 caused the north side of Mt. St. Helens to collapse, exposing the volcano’s partly molten, high-pressure gas- and steam-rich rock and causing it explode, putting material 15 miles in the air in ten minutes. Amateur photographer Gary Rosenquist snapped this shot 10 miles away from the mountain.

“The gray-colored particulate first fell on the southern end of the valley as local wind patterns blew the ash northward. The towns of Springdale and Valley were enveloped by the cloud ash first. Then a southerly breeze pushed the cloud up the valley and more ash came billowing over the Huckleberry Range to the West, quickly obscuring the clear blue Sunday afternoon sky,” The Independent reported.

Local businesses stayed open, save for both banks closing their doors and the golf course closing. School children were also sent home.

Geno Ludwig, who still writes for the newspaper, became the defacto-volcano reporter for The Independent the next few weeks and uncovered an incredible angle – one Chewelah grad almost met his end in the path of the volcano.

Lari Fetter, then attending Spokane Falls Community College, was in the general area of Mount St. Helen’s when the initial eruption took place. He and 15 members of his geography class were on a field trip across the state with their instructor.

Luckily, the group was on a campground near Mt. Rainier and well outside of the deadly area of the eruption. However, if the boys of the group had their way – they would have been doing some fishing in the Toutle River area that quickly became a destructive force of ash and other debris during the eruption. 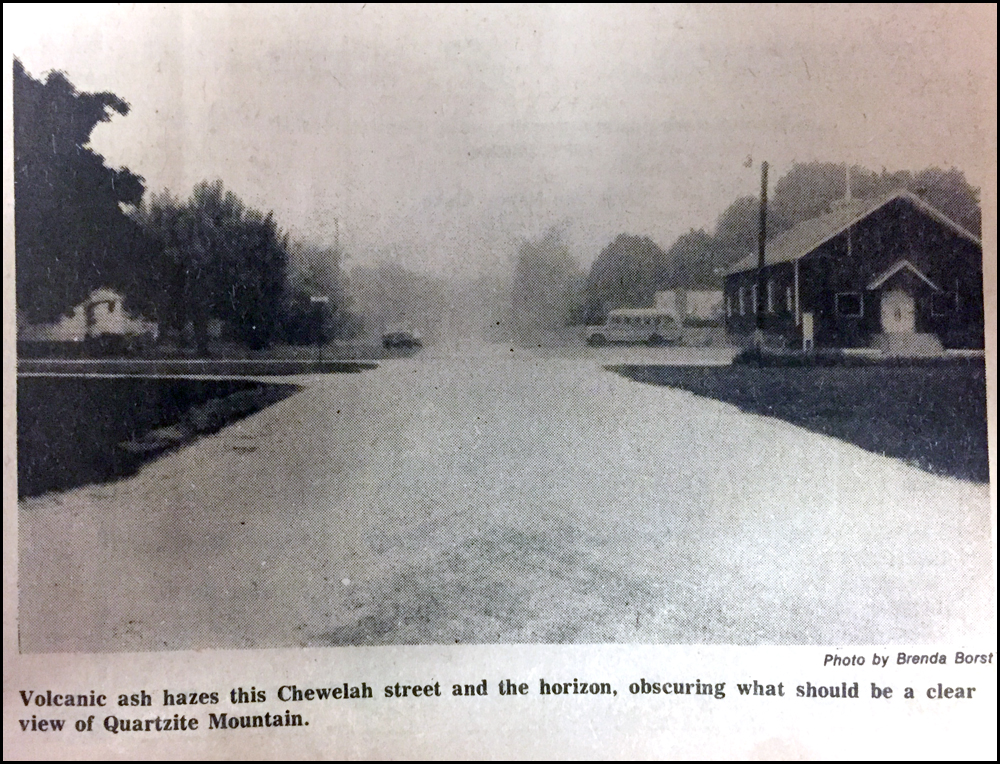 “Some of the guys, including myself, wanted to camp down in the valley and do some fishing,” Fetter told Ludwig. “The girls wanted to go on to a park near Mount Rainier where they could take a shower and clean up. When we voted, the girls won 11-9, so we left.

“It’s a good thing we did leave too, because we would have been killed almost instantly by the initial blast of the volcano. That’s what a geologist later told us. He said that we either would have been fried by the heat or would have suffocated in the ash cloud that would have surrounded us in a matter of seconds. He was up on Mount Rainier taking pictures when Mount St. Helen’s blew its top, so he would know.”

Nearby on Mt. Adams, another person from Valley had a front row seat to the biggest geological event in the nation’s history.

Jim Potter and two friends went up to Mt. Adams to do some snowmobiling when they found out there was not enough snow near the 5,000-foot level. They decided to head back to the bottom but as soon as they turned their pickup around – Mt. St. Helen’s erupted.

“The whole mountain split open as if someone was dynamiting a ditch,” he told Ludwig. 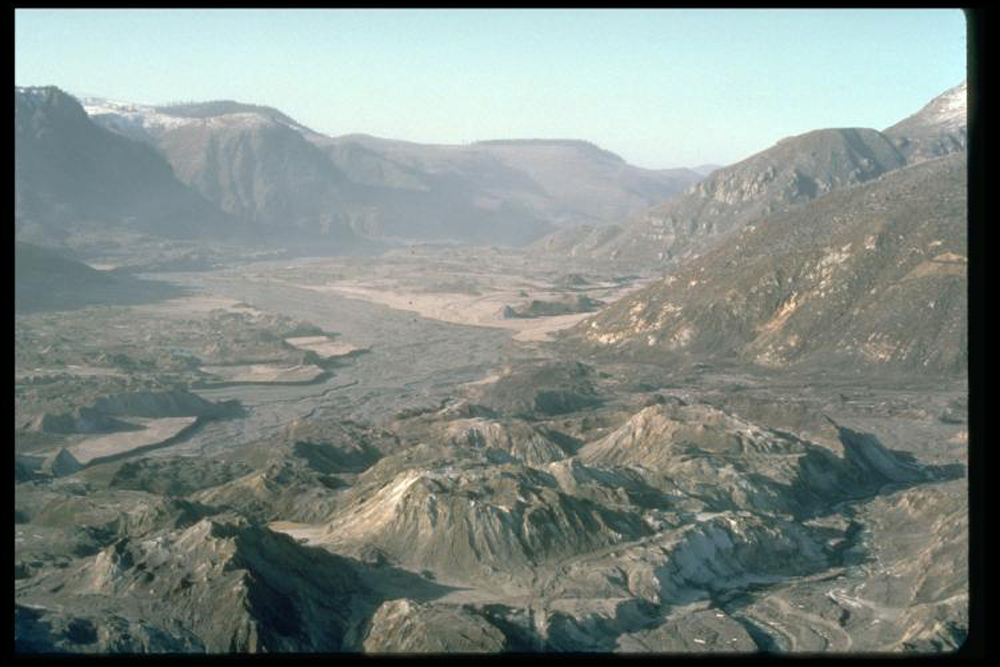 The Toutle River valley was devastated by lahars by the eruption of Mt. St. Helens. (USGS photo)

Understandably, the three headed down the narrow mountain road going 50-miles per hour in their pickup but they couldn’t evade the mushrooming cloud of ash. Their windshield wipers had to work overtime to keep ash off the window – so much so it eventually blew a fuse.

They had to replace it before continuing down the mountain. By then, visibility was extremely limited and they limped into the mountain town of Packwood where two inches of ash had gathered on the ground.

Those in Chewelah had their own ash stories

Gary and Vickie Nussbaum were coming home from their honeymoon in Hawaii, and made it to Seattle where they had to stay with an aunt and uncle for three days before they could get a flight home because of the ash. 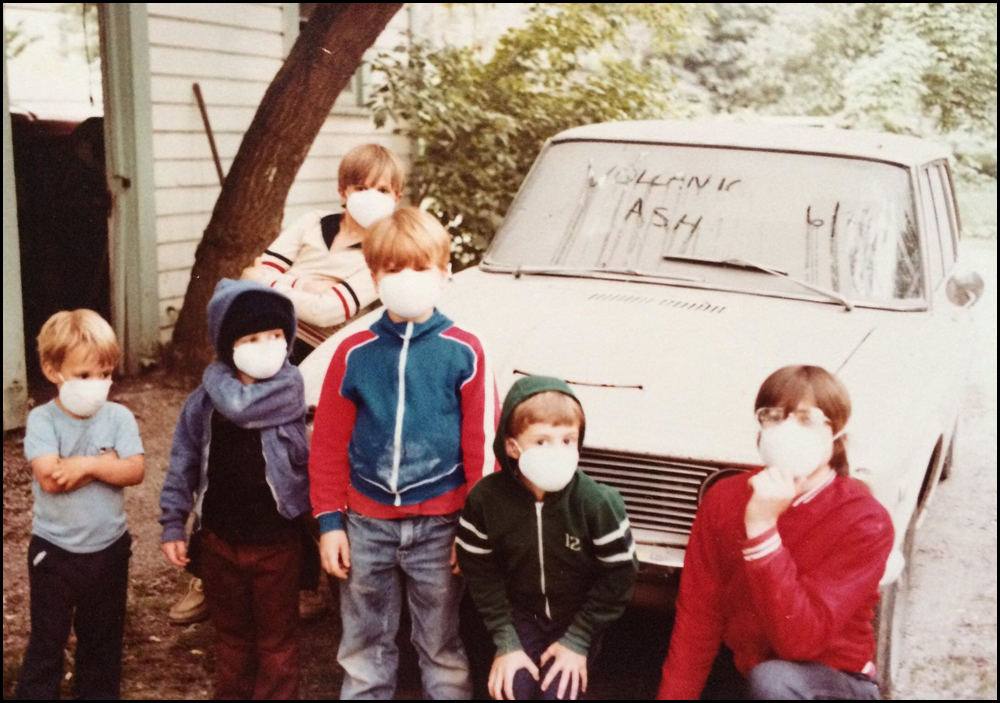 Tom Skok was playing baseball with his cousins, aunt and uncles when the wind picked up and a great black cloud showed on the horizon.

“We all thought it was rain, but then someone came out of the house and said we should all head inside because Mt. St. Helens had erupted and the ash would be bad for us to breath,” Skok said.

Geno Ludwig had just gotten home from church and was chatting with neighbor Blayne Hyde when a big dark cloud began coming in.

“It was not like a regular cloud because it was rolling and boiling its way across the sky,” Ludwig explained. “We watched it for a few minutes until his wife came out and told us Mt. St. Helens had erupted. Before too long, the gray ash started to fall. Then, when the cloud covered the sky, it became as dark as night, and the street lights came on.”

Hyde was in the national guard and was activated to go to Ritzville where the ash was much deeper. The ash would remain for several years along I-90 in the middle of the state. 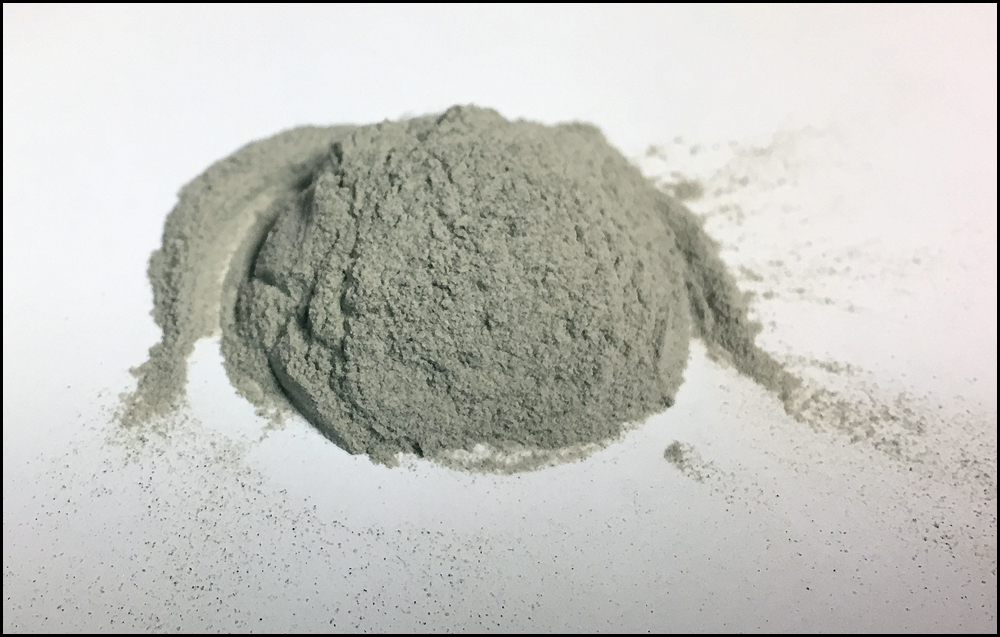 Former JHS principal John Polm was living in Cowlitz County near the mountain in 1980 as a junior in high school.

“We had just arrived for Sunday school at church when we heard sirens and looked outside to see the plume head up to the heavens,” Polm said. “We headed home and waited for emergency management to let us know if we needed to evacuate. I was in Longview, Washington. They feared floods were headed our way. We never went back to school that year.”

Denise Smith, who was student teaching at the time, was attending a BBQ in Whitman County and headed back towards Spokane when the mountain blew.

“We drove our car until the ash started coming in through the window that we didn’t know leaked, causing us to cough up a storm,” Smith explained. “Got another car at a friend’s house. Drove a couple miles in a total black out where we could barely make out the road. Drove till that car stopped. Finally a small Toyota pickup came by and they had been stopping every few miles and knocking the ash out of their air, filter. We abandoned the friends car on the side of the road and jumped in the back of the Toyota and huddled with our faces inside our jackets to keep from breathing the ash which was swirling everywhere.”

Smith said they ended up heading back to the friend’s house and were stuck for a few days because the roads were closed.

Residents of Chewelah would help with the cleanup across the state and life would eventually return to normal.

For the immediate area around Mt. St. Helen’s, however, the landscape is still very much changed. What had been dense, lush forestland – prime logging land – still has the appearance of devastation today. It was estimated that the eruption caused 24 megatons of thermal energy which is equivalent to 1,600 times the atomic bomb dropped on Hiroshima.

While wildlife and plantlife is returning, it has become the perfect science experiment for people to see how life returns around a volcano after an eruption.

People can now visit Johnston Ridge Observatory which peers into the crater of the topless volcano, named after the scientist David A. Johnson who died during the eruption, the Observatory sits in the path of destruction that the mountain unleashed in 1980.

Mt. St. Helens has been relatively quiet since – save from small spurts of activity in 2004 and 2008 – but it’s hard to forget how one day changed the landscape in Washington for years to come.

‹ Colville City Pool will be closed for 2020 season due to COVID-19 › PHOTO GALLERY: Mt. St. Helens today, 40 years after the eruption