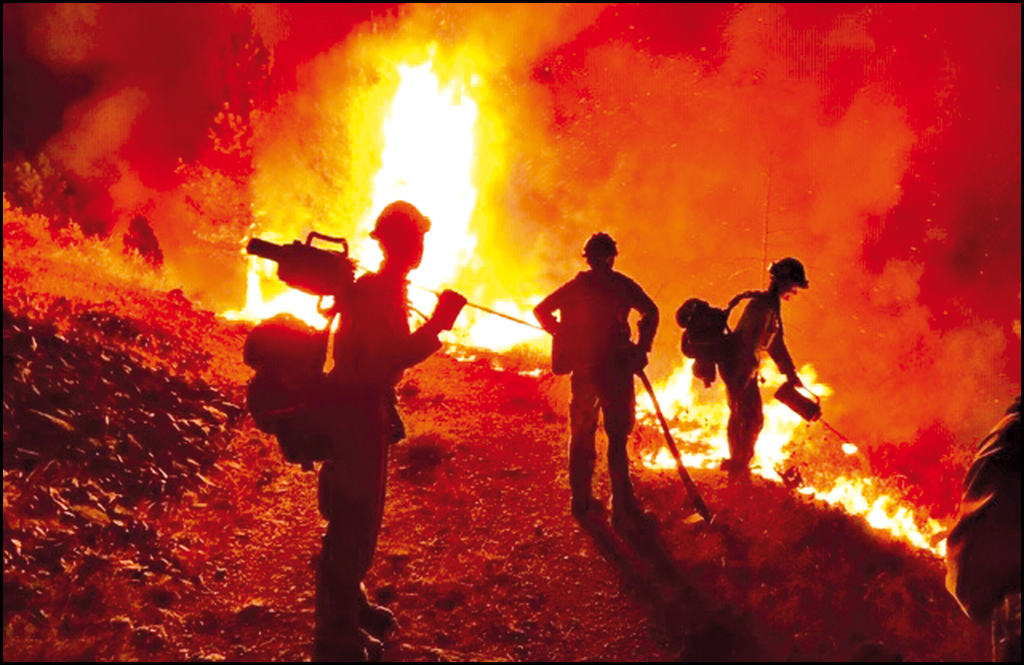 Rains were so heavy it set a historical record at the Spokane International Airport with .36 inches of precipitation. Many areas around Chewelah received over an inch of rain. This was good and bad news for firefighters. While the precipitation certainly slowed the fire down, a crew of 64 firefighters had to spend the night on the line at the Williams Flats Fire due to flash flooding caused by 1.36 inches of rain which bogged down the one route back to the fire’s command post. Some slept in vehicles or found areas of cover, and thankfully there were no injuries from the storm despite the lightning.

Video showed dramatic flooding as rainwater rushed down waterways turning them into raging rivers through the burn scar of the fire.

When it comes to fighting wildfires, for the more than one thousand firefighters working on the Williams Flats Fire, the 250 working on the North Mill Creek Fire and the many local volunteers keeping smaller fires from turning into big ones, it shows that there is very little you can expect to go as planned during fire season.

The fire season so far has been a weird one as really hot temperatures started late and rains in July helped overall fire danger. Currently, there are seven large wildfires in the Northwest including three in Washington. Locally, the North Mill Creek Fire is burning about 12 miles NE of Colville in the Colville National Forest. As of Tuesday, the fire was 423 acres in size, but firefighters had it 100 percent lined and 100 percent contained. Firefighters will continue mop-up operations to include finishing hose lays and targeting hot spots in the fire but overall, heavy equipment on the fire is being released

Further down south, the Williams Flats Fire had initially caused a bevy of evacuation notices or orders in southern Ferry County and even the Fruitland area of Stevens County as a precaution. Those have been downgraded and lifted since the rains.

ORGANIZING FIREFIGHTERS
Wildland firefighting isn’t easy, and there are several agencies, both local and state-wide, that respond to blazes, along with private contractors as well. Local fire district firefighters are expected to be ready to stay out 14 days on fires and most of the times calls last four to eight days.

“They are also expected to be self-sufficient for the first 48 hours. This means they should have meals ready and a way to bed down,” Stevens County Fire District No. 1 Chief Mike Bucy said. “This is in case the team handling the fire doesn’t have things up and running right away.”

According to local firefighter Aaron Alvarado, sleeping conditions can vary.

“The last fire I was on, we stayed for two weeks,” Alvarado said. “The sleeping conditions vary; I’ve stayed in a high school gym, a weight room, a baseball field, the back of the brush truck, hay field. You basically just try to find the comfiest spot to sleep.”

The seasonal wildland crews you see tend to go from fire to fire, and downtime is mandated in between workdays. Workdays are 12-hour days, but that doesn’t include time back at camp eating, cleaning up their gear and restocking supplies, showering/personal hygiene and of course, sleeping.

Bucy said the camps have changed dramatically over the past several years.

“Mostly gone are the days of mostly scrounging for food and begging for supplies from the communities,” he said. “The camps are now usually equipped with portable kitchens, showers, hand washing stations and other amenities. The firefighters are still expected to bring tents and all camping supplies.”

The long days do catch up to crews and fatigue becomes a major concern. There is also “camp crud,” a general illness caused by unclean conditions, so the IMT teams emphasize rest and cleanliness.

Most days start at 5 a.m. with breakfast and then a daily briefing at 6 a.m. Lunch is also provided in brown bags with high calorie counts, and firefighters will generally come off the line around 7 p.m. with dinner waiting for them at camp.

Night shifts do the same, Bucy said, but with 12-hour opposites and there usually aren’t as many crews on the night shift.

“Life in camp can be boring,” Bucy said. “Depending on where camp is set up, there may be no internet or phone service. Firefighters will mostly rest and sleep, but you find many reading, playing cards or just getting to know firefighters form other areas. There always seems like there is some work to be done in preparation for the next work cycle. Some camps are nicer than others and may allow some nature walks or just looking at the great night skies.”

ON THE FIRE
You’ve seen the maps, the lines and the terms like contained and lined, but what is it like for the firefighters? You can never predict what you’re going to run into.
Fires present challenges based on terrain as some are on fairly open territory with lots of access roads, meaning more vehicle support. Other fires are more remote meaning that firefighters have to hike into areas.

“This causes additional crew stress and takes longer for crews to reach fire areas and to hike back out for end of shift,” Bucy said. “The rougher the terrain, the more aircraft are used longer into the fire.”

Firefighters will bring their lunches along with water, Gatorade and snacks. Lunchtime can be used for a power nap. In the depth of summer, firefighters aren’t just fighting the blaze but also what their own body can take. Triple-digit temperatures that were present during the real growth of the Williams Flats Fire presented real issues of dehydration and heat stroke.

“Heat and wind can be the worst conditions in a fire,” Alvarado said. “Not only does the heat make the fuels burn faster, but the heat also can take a toll on your body; heat exhaustion and heat stroke are a couple possible outcomes. We have plenty of water supplied on our packs.”

Then there is the smoke.

“Inhaling wildfire smoke gets old,” said former wildland firefighter Jake Rehm. “But you get used to it. Just imagine breathing in smoke from a campfire, but more concentrated. It smells after a while and it gets into all your clothes.

You’ve heard red flag warnings, and while fires can start early in the year even with somewhat cooler conditions, when things are hot, it serves to help the fire.

“Temperature sucks the life out of people. And when it’s warmer, conditions tend to be drier,” Rehm said. “The drier the conditions, the worse the fire.”

Fires take on many forms during their lifecycle and what the public needs to look for is when progression is stopped. This means the fire is under control but is not out.

“It also means the fire could spread quickly if the weather pattern changes,” Bucy said.

Percentage lined is how much crews have worked around the fire’s perimeter, typically putting in a foot or two, sometimes up to eight feet of fire line to prevent fire.

While media sources always talk about containment, it’s a misleading statement as true containment for a fire will take weeks. Think of containment as a percentage of being mopped up but not out.

THE BLESSING AND CURSE OF RAIN
With record-breaking rain hitting the area on Saturday, it provided both salvation and issues. Bucy said rains definitely help, and at best can cut days or weeks off of fires that would have otherwise burned longer. But it can also cause issues.

“It can also cause major complications, such as landslides on barren, burnt out forest-exposed land, road washouts, very muddy conditions which cause cleanliness issues back in camp and plain slippery conditions that can cause injuries,” Bucy said.

He added that it takes a real good soaking rain to make an impact. If you looked under trees in your own backyard, you can see some rain doesn’t even make it into the ground. Two or three hours of rain is not a cure all, in fact, it’s not even close. A soaking rain is needed.

“A soaking rain is one where the rain penetrates the ground and allows plant life to ‘drink up’ for several days, lowering the fire value of the foliage in the area,” Bucy said.

LIGHTNING STRIKES
The rains also brought lightning, and this poses a massive issue for firefighters. Strikes can hide for several days and flare up even after a soaking rain.

“The strike can cause a fire on the inside of a tree and even down into its roots – something the average 300 kilovolts can do,” Bucy said. “When things dry out and get breezy, fires can pop up, sometimes many yards away from the original strike. The strikes over the past month continue to manifest themselves as recon aircraft pick out smoke columns in remote areas.”

Bucy said that until fire danger levels are lowered to moderate or low, everyone needs to be vigilant, but not scared of their surroundings and report every instance of smoke.

For a local fire district like Fire District 1, the July 23 thunderstorm produced 22 calls in three hours, their highest volume recorded. Then the past few weeks were quiet.

“One thing we did after the July 23rd storm was to take the lightning strike maps from the National Weather Service and send crews out hunting for those remote strikes,” Bucy said. “This lessened the chance of flare ups in later days and we didn’t experience any.”

For Alvarado who serves on the Chewelah Fire Department and Fire District 4, he said they can have no fires with things quiet or there can be five or six fires at once.

“The last storm we had started two small fires, but because they were so small, they were taken care of quickly,” he said. “However, the roots can smolder underground for months after the surface part of the fire has been extinguished and could come up any time and start another fire.”

The Williams Flats Fire smoke was so great, it triggered thunderstorms and NASA scientists were able to fly through the clouds to measure the phenomenon which is called a pyrocumulonimbus or PyroCb.This rarely dumps precipitation. It’s a huge step for NASA, as these measurements could help pioneer more research on wildfire-caused thunderstorms and help climate models and how wildfire smoke interacts with the stratosphere.

REMAINING FIRE SEASON
Bucy said fire crews are preparing for a late season, perhaps stretching into mid-October, but a lot will be determined on the 10-30 day forecasts. It could fizzle out early with more rain and lower temps. One thing is for sure, it wouldn’t be good for August to get warmer in its later stages.

“We don’t need heat to cause critical fire weather at this point—winds and low humidity will be the main causes,” Bucy said. “One fortunate thing is that the later we go in the season, the shorter the days are. This means cooler night temperatures and higher overnight humidity.”