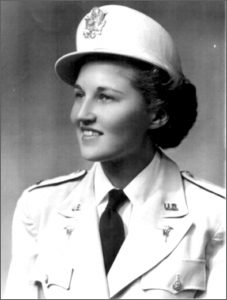 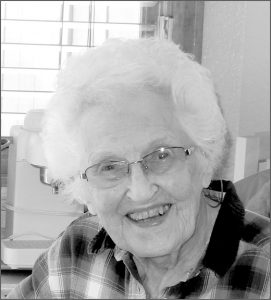 May Alm, age 103, passed away September 30, 2019 in Centennial, Colorado where she spent her last years with daughter Marie. May called Chewelah, then Spokane, her home. She was born on the first day of Spring, March 21, 1916, near Mirror, Alberta, Canada to Edward and Hilda Buelow. Her mother died during the flu epidemic of 1918, and she was raised by her father and aunts on their farm in Mirror, while also spending many summers growing up with her grandparents and aunts on their farm in Swiss Valley, just west of Addy, Washington. Addy and Chewelah would later pull her to the U.S. from her roots in Alberta; roots she was extremely proud of.

Always one step ahead, May finished high school early and was determined to study further to become a nurse. She attended Royal Alexandra School of Nursing in Edmonton, and graduated as a Registered Nurse and thereafter moved to Chewelah, Washington where she proudly worked as a nurse for Dr. Merle B. Snyder.

As World War II was getting into full swing, May enlisted in the Army Nurse Corps through the Red Cross, and after her training period stateside, was shipped to England as preparations for the D-Day Invasion were being made. Five weeks after the initial landing on Omaha Beach, May and her medical unit went ashore on that same beach. May saw the rest of WWII up close and personal following General George Patton’s Third Army through the Battle of the Bulge and on to the end of the war. It was a long time before she began to tell her children the stories of those days.

Returning to Chewelah, she and another local veteran, Maurice Alm, married and subsequently had three children – Eric, Ed and Marie. She took up the role of housewife raising kids until a fateful day in May 1956 when Maurice succumbed to the ravages of rheumatic fever contracted while he served in the South Pacific during the War. May fell back to her nursing training and began a career as county health nurse for southern Stevens County, all the while raising those three children, enjoying her PEO membership, shopping with friends and other small town activities. With Marie’s high school graduation, she moved to Spokane to her next career – nursing at the Veteran’s Hospital in Spokane where she worked until her 1981 retirement.

From there, a long and eventful retirement ensued. She took up ballroom dancing, attended weekly workout sessions with friends, shopped, volunteered, traveled and continued her family passion of skiing, finally putting the skis up on her final run down the mountain at age 90. In her mid-90s, May moved to live with Marie in the Bay area south of San Francisco. Always proud of her Army service, she and Marie, an Army veteran herself, became very involved in veterans’ activities, first in the Bay area and then on to the Denver area. She enjoyed an Honor Flight to Washington D.C.

She and Marie attended the ten-year observations of the Normandy Invasion in France multiple times. It was during these trips that she met Presidents George W. Bush and Barack Obama along with many other well-known dignitaries. As these trips continued, May developed as a personality in her own right, especially serving as a model young women might look up to with pride.
May certainly had a zest for living and she did it well. She will be missed by her three children – Eric (Fay), Ed (Bonnie) and daughter Marie; her grandchildren – Jason Alm (Ashley), Andy Alm (Jamie) and Adam Alm (Lindsay) along with great-grandchildren – Carson, Ava, Maya, Anya and Lydia.

May’s services will be held at the United Church of Christ in Chewelah Friday, October 18 at 11 a.m. with burial following at Chewelah Memorial Park Cemetery. In lieu of flowers, donations can be made to the Easter Seal Society, Alzheimer’s Disease Research Association, or Denver Hospice.