KEEP CHEWELAH WEIRD: Why our town is odd 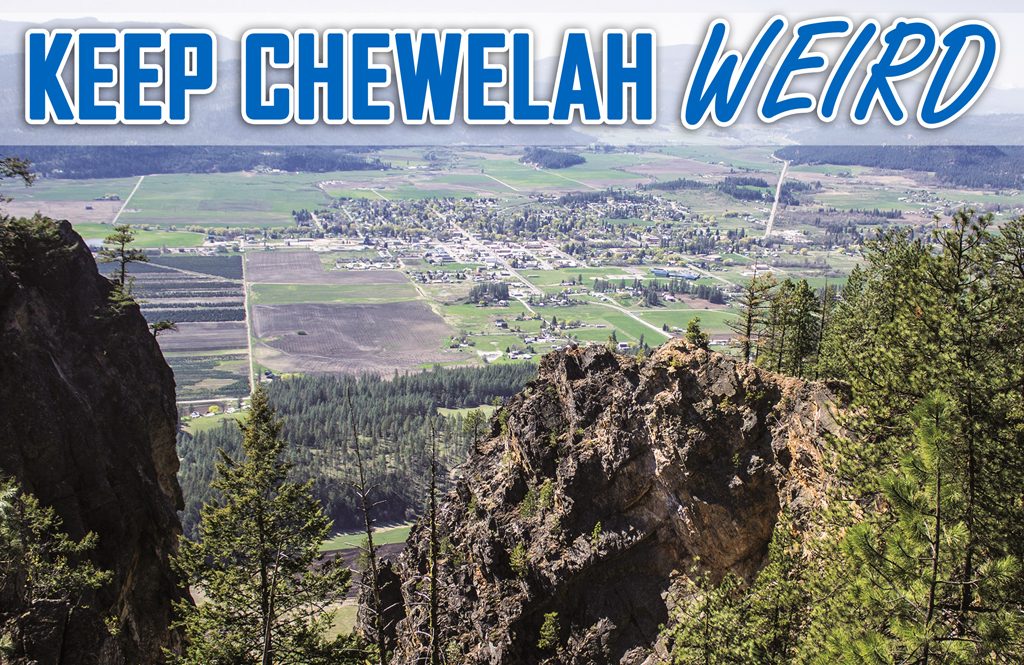 From a name most people can’t pronounce, a history that defies the average expectations, a blossoming art scene in a rural area and just the people… this town is weird and we should celebrate it…

It’s been surmised before that Chewelah is Small Town, U.S.A., but that would be ignoring a great variety of reasons why this town is more than meets the eye.

In this week’s issue of The Independent, we take a look at what makes Chewelah weird and a great place to live.

NOBODY CAN PRONOUNCE CHEWELAH, AND THERE IS ONLY ONE CHEWELAH
It’s not like there is a Chewelah, Ohio or Chewelah, Wisconsin. Our town name is the only one we know of. Named after the Salish word “gartersnake,” out-of-towners have struggled pronouncing the name for years. When Jenkins High School teams make the state tournament, outside media provides a great deal of entertainment with their take on the word. It’s not the first time the town has had a “weird” name as it was Chiel-Charle-Mous on the 1897 U.S. Land Office Map and was also called Fool’s Prairie at one point. Why is this important? Because you really can’t confuse Chewelah with any other place. Onlyinyourstate.com has called Chewelah one of the weirdest town names in the state. While residents of our town are probably relieved we don’t call it Fool’s Prairie anymore, they might take pause that Chewelah has been ranked as the No. 6 silliest town name in Washington.

IT’S ACTUALLY TWO TOWNS IN ONE
Chewelah is one of the only towns you will come across that actually has two separated spaces that are considered city limits. Much like Michigan is separated into two separate parts, there is a Chewelah North and Chewelah South thanks to the town’s golf course community. While big cities typically have different neighborhoods, or places they have annexed or towns that are part of their metro area, Chewelah is a small town oddity with two separate sections. Towns can’t do this anymore, and our city got grandfathered in with an exception. So when you’re talking about going to the golf course again, perhaps make it sound fancier by saying you’re going to “Chewelah North.”

“The fact that we have both a great ski hill and a fantastic golf course is from lots of hard work and support,” Theresa Nelson said on a Facebook thread. “But don’t forget we also now have, after years and years of hard work, a stage theater born and built by the dedicated people of Chewelah. Chewelah has also bred many well-known success out doing big and interesting things in the world, athletes, musicians, doctors and teachers to name a few.”

CHEWELAH HAS A GHOST GOLF COURSE
Did you know the current golf course is the second one to come to town? Before the Chewelah Golf Course and Country Club, there was a nine-hole golf course up by Brown’s Lake for the magnesite plant employees. Obviously the industry shifted and people moved away from there, but there are still ghost houses that remain from a bygone era. There was a golf course around the lake, but you wouldn’t know that now as it’s a recreation area with hiking, fishing and canoeing. While you may think you’re out in the wilderness, you’re actually on the seventh hole green. The old magnesite plant is also an oddity as it was the largest one of its kind during World War I, which was a long time ago if you’re keeping score. The smoke stack is the tallest building in the area, so perhaps they can rent office space there?

CHEWELAH IS THE LAS VEGAS OF NE WASHINGTON
How many towns of 2,600 have their own casino? Perhaps the Chamber of Commerce needs to change the town motto to “What happens in Chewelah, stays in Chewelah.” Some people can attest: they’ve never left town, nor do they want to. 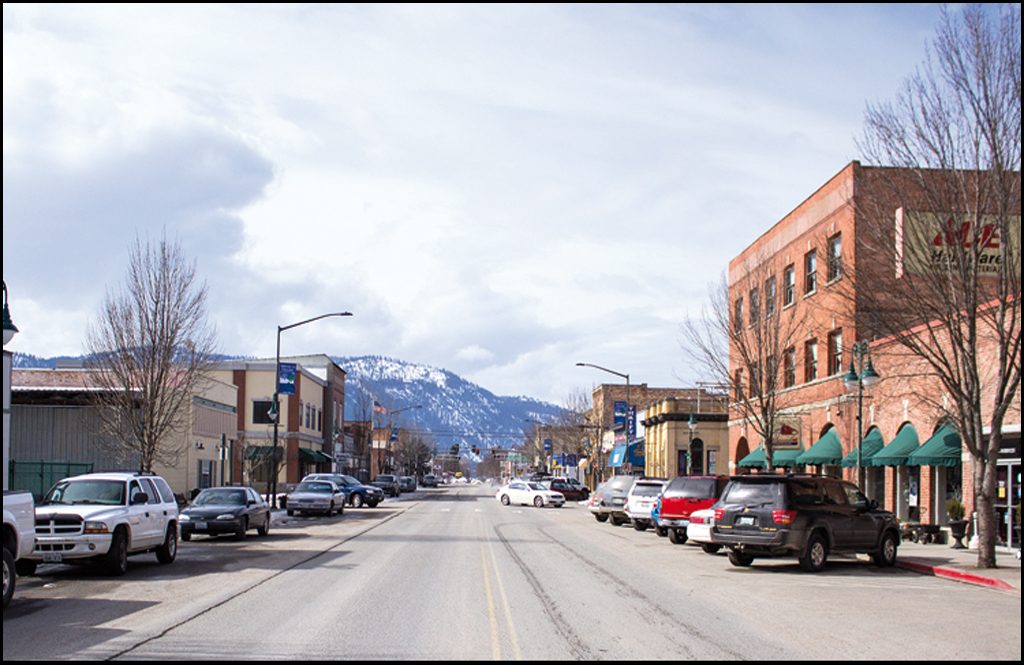 MAIN STREET IS ACTUALLY MAIN AVE.
Chewelah doesn’t actually have a Main Street. It has a Main Ave., and looking at the businesses along the stretch, it’s like reading off a hipster’s paradise checklist. Secondhand store, coffee shop where Allen Stone hangs out, fire brick oven, Sporty’s with an eclectic menu, workout studio and a radio station off in the back alley where an overweight cat dictates the on-air programming.
Longtime Chewelah teacher Jeff Kersey said he always thought it was weird that a small town has a 2nd, 3rd and 4th Streets, both east and west.

EVERYTHING IS NAMED AFTER A CIVIL WAR OFFICER, OR WAS DONATED BY HIM
It would be hard to imagine Chewelah without Colonel Jenkins, and it’s always hard to explain to people at high school state tournaments that Jenkins is not the name of the town but the school. Chewelah’s “Wild West” roots are cool, as there are rumors that Wyatt Earp may have even been through town. Not confirmed, but we can at least assume that an actor who played Wyatt Earp, Kevin Costner, was one mountain range over in Metaline Falls when they filmed “The Postman.”

RENOWNED ARTISTS CALL CHEWELAH HOME
The famous runners of Bloomsday spent some time outdoors near Chewelah while they were being fabricated and weathered. David Govedare has been here for decades, and he’s working on his latest project – a bigfoot up at 49 Degrees North. Then there is well-known singer Allen Stone, who can show up on American Idol or at the corner coffee shop in Chewelah just as easily. Stone got headlines for finding an FFA jacket at a thrift store and giving it back to the owner. If that isn’t the most Chewelah thing ever, I don’t know what is.

CHEWELAH HAS ITS OWN PERSONAL SCENIC MOUNTAIN
Quartzite IS the tallest thing in town and is about as iconic as Mt. Rushmore or Mt. Rainier. Its distinct rockface is instantly recognizable and unlike anything we see anywhere else. Other geographical oddities in the area is that Chewelah has a creek that flows south into the Colville River which flows north. There are lots of boulders and rocks around the valley that shouldn’t be there except glaciers deposited them years and years and years ago. Also some people think the pointy knob (I don’t know the name) mountain south of Quartzite could be an ancient alien pyramid. We won’t deny this; haven’t you seen the movie Stargate?

LET’S BE HONEST, WE’RE A BUNCH OF HIPPIES
The dreams of the 1960s are alive in Chewelah. Let’s face facts: We’re a bunch of hippies. We have a cute redneck side. There is a sprinkling of hipster in here, there is a logger side and then there’s the North Face jacket-wearing crowd.
Every Sunday at the Chewelah city park you can watch the Amtgard group fighting with foam swords. This family-friendly group is part of a nationwide, foam sword fighting, role-playing game.
Every year the Between the River Gathering is a primitive skills event just outside of town near Valley. (Sorry Valley, we’re considering you part of the Chewelah family too.) If you want to see kilts, guys living in Gypsy wagons, people in buckskin, people smoking and tanning hides, the milking of goats and much more, this event is a one-stop shop for you.
We also have a Sasquatch festival, a festival where we put a bunch of pumpkins in the city park, BooFest, City Sidewalks and much more. Chances are, you’ve driven through Chewelah before, seen something weird happening and almost rear-ended the person in front of you on the highway.
Your neighbor could be a logger or a hard rock drummer; there is no inbetween in this town.

OUR NEWSPAPER STILL EXISTS
Nothing says weird more than a newspaper surviving in the new world of digital media. Perhaps the people of Chewelah are creatures of habit, but they still like picking up a physical copy of the newspaper. Also, if you look back, Chewelah has been blessed with the same sports reporter – Geno Ludwig – since the Ford Administration. Geno is more like a Supreme Court Justice on the newspaper staff.

THAT BEEHIVE KILN THINGY
This structure has been on the side of the road forever, and nobody in town can quite tell what it was once used for. We’re assuming it had to do with something in Chewelah’s manufacturing past, but it would be much more fun to say it was where all the Freemasons gathered for their secret meetings.

THE RESTAURANT AND BREWING SCENE IS WEIRD
I know we’re all sad about McDonalds leaving, but look at all the local weird stuff popping up. Quartzite Brewing Company has been around for three years now, naming their beers after famous NE Washington landmarks while also making some really interesting brews. They’ve brewed a hoppy fruit CitraWizen, a Strawberry Rhubarb Gose, a Grye Gruit with caraway orange peel and ginger with no hops. On Jan. 17, they’ll be celebrating their three-year anniversary with milkshake inspired IPAs and pale ales. There will be a blueberry, strawberry, mango and chocolate style beer. During Chataqua, they also had a funnel cake brew.
That’s not all – there is the Oasis burger – which is just hard to describe. Jesse at Sporty’s is like a mad scientist when it comes to making his specials, and their burgers belong at a four-star restaurant in Spokane. Fired Up Pizza is a brick oven place in a small town, offering a breakfast menu, a wall full of beers and even a breakfast beer. Westside has tons of specials and speedy delivery drivers and our golf course is now almost known more for its breakfast than its golfing. The Bread Box is a Willy Wonka factory of carbs and sweets. There is also the awesome lady who delivers donuts every week in town, and the Farmers Market has a stable of unique dining options.
Basically, if you can’t find anything to eat in town, you’re not trying hard enough.

CHEWELAH REPURPOSES EVERY BUILDING IT CAN
Some of Chewelah’s buildings were moved from a mining and logging camp up Flowery Trail. The former grade school is city hall, the former city hall is the school district building and the Sety’s Ace Hardware store is a former hotel. The former town armory, designed to withstand a Soviet attack, is now the Center for the Arts – so Shakespeare is safe from the Reds. Chewelah’s Quartzite Brewing is an old auto shop, and the old Chewelah Bank is now a coffee shop: Jean Bean’s Coffee. This town is old and there are probably ghosts here. Don’t believe us? Go spend a night in the middle school.