JJSHS dealing with vaping use along with nation 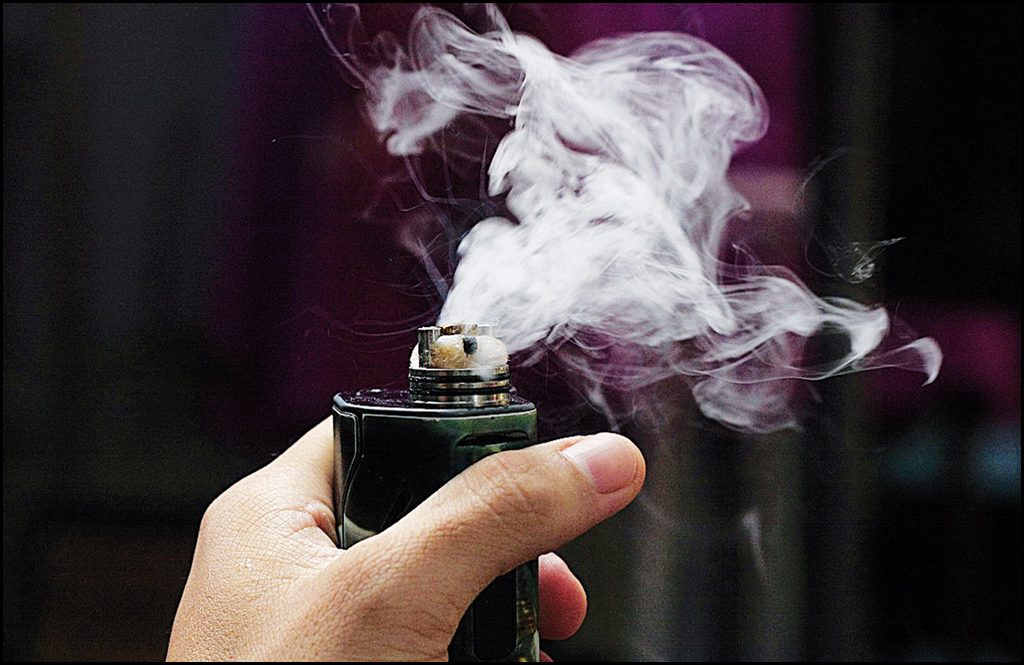 According to a CDC survey, 27.5 percent of high school students say they have used an e-cigarette in the previous 30 days. (File photo)

QUICK RISE: While teenage smokers drop, the number of young e-cig users grows, even in Chewelah…

​Vaping has been in the headlines for months concerning states like Washington banning flavored vape products because of dozens of deaths and respiratory illnesses. While the topic is controversial because many of those deaths deal with black market THC products and not the banned items, one issue that is growing is teenage use of vaping products.

Last year in Chewelah Schools, there were about 12 referrals for students who were vaping on school grounds or on a bus. The Center for Disease Control reports that more than one-in-four high school students said they were vaping in their annual National Youth Tobacco Survey.

Vaping looks like it has replaced smoking cigarettes among teenagers. In 1991, about 28 percent of teenagers said they smoked, but by 2017 that had dropped to 7.6 percent.

At Jenkins Junior/Senior High School, students caught were given a three-day suspension for first time violations and parents were contacted. Athletes were suspended from competition for violating the Athletic Code of Conduct which they have to sign.

Second-time offenders are removed from all athletic participation for the remainder of the school year and they have to complete a drug and alcohol assessment at their parents expense with the results of the assessment shared with the school and a plan of action to follow the assessment recommendations.

“Most incidences of vaping or alleged vaping were in areas of the school with little supervision,” JJSHS Principal Shawn Anderson said. “A few of the violations occurred at athletic events where there is little supervision.”

The high school has provided opportunities for staff to learn about vaping and what devices look like. There have also been info nights put on by the district but these have been sparsely attended.
Anderson said that vaping seems to be popular nationally in multiple teen groups. It’s crossed the line just from the “group of smokers” you may have seen in years past on the other side of the road.

“This can be a challenge because it has appeared to be a safer alternative to smoking,” Anderson said. “We have seen a trend nationally in the use with athletes as well. This doesn’t help discourage vaping when students think that vaping is safe and cool.”

National public health advocates have said e-cigarettes have erased years of progress in reducing smoking rates in minors and this is the next generation of kids addicted to nicotine. Healthwise while e-cigarettes are seen as less harmful that traditional cigarettes, the long-term health risks are unknown because these are new products.

Anderson said that Chewelah Schools have seen very few students smoking on campus in the last 15 years. Vaping, however, has become more prevalent and popular.

This is where is gets muddy, because there has been a mysterious lung disease linked to vaping. This has resulted in several states banning flavored vape products, but critics of the ban point out that deaths have resulted from bootlegged THC products and not commercially available products. Dozens of deaths nationally also pale in comparison, critics say, from the number of people who have died from cigarettes. Critics of the ban also say that the correlation of deaths may be by people already with breathing issues who just happen to be vaping since use is widespread among people.

The CDC in September said it was investigating more than 450 cases of lung disease that health officials suspect were caused by vaping.

When it comes to student use, it’s hard for Chewelah Schools to handle the usage.

Anderson said that teachers have been integrating discussions in classes when appropriate and the effects of vaping are being covered in senior Current World Affairs as well.

“Mr. Gump is covering the dangers of vaping in his health classes and we have put up posters around the school to discourage vaping as well,” Anderson said.

The John Hopkins Medical School of Medicine, while saying vaping is less harmful than traditional smoking, adds it is still bad for your health.

Regular tobacco cigarettes contain 7,000 chemicals, many of which are toxic, the school said but while some of the chemicals in e-cigs are unknown there is no doubt that vaping exposes you to fewer chemicals than traditional cigarettes.

Still, it contains Nicotine which is a toxic substance that raises your blood pressure and spikes your adrenaline, increasing your heart rate which can raise the likelihood of having a heart attack.

The school also said that e-cigs do not help you kick the smoking habit and most people who use them to kick their cigarette habit just end up continuing to use both products. They also said flavored vaping products with products that taste like apple pie or watermelon appeal to younger users and have contributed to the rapid increase among student smoking.

Washington’s emergency rule that banned vaping products in October will last 120 days. At the time of the ban, 24 deaths had been confirmed in 20 states, but the specific chemical causing lung injuries are unknown but the signs point to a majority of patients vaping THC products.

It appears the issues around vaping, especially in young people, will certainly extend past those 120 days, but the numbers are telling. Vaping has increased by hundreds of percentages in the last decade and even in Chewelah, smokers have been replaced by vapers.

‹ 1B FOOTBALL: Springdale wins two games in one week › October was Spokane’s coldest on record, according to National Weather Service