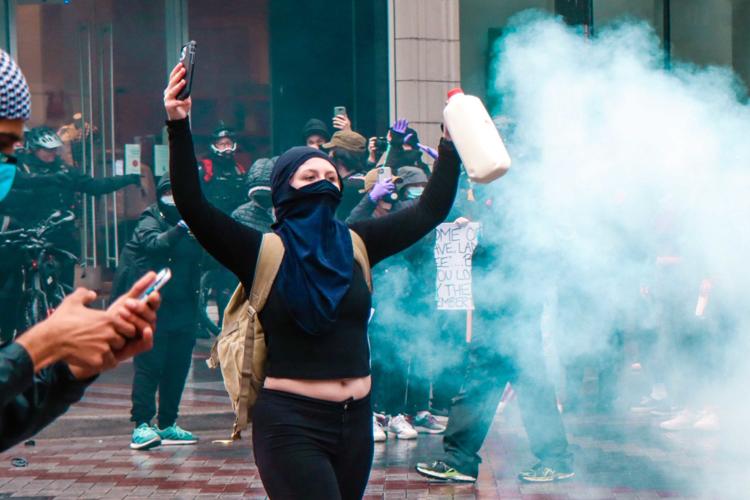 Over the weekend, protests erupted in Seattle. (Jared Wenzelburger/Centralia Chronicle)

Governor urges against framing protestors, police as ‘teams’ against each other…

During a press conference Wednesday, June 3, the governor spoke about protests across the state for the second time this week. Inslee said he was “heartened” by reports both in Washington state and nationally of protest organizers putting in effort to keep violence from “hijacking” what would otherwise be peaceful demonstrations.

“It’s been the organizers of these protests that I think have really encouraged people to not allow the violence to mar their peaceful protests, and I want to give them credit for that,” Inslee said.

Inslee said he was meeting with leaders of Not This Time!, Black Lives Matter of Seattle-King County and the Urban League later that day. He said that in order to change the “ancient inequities” people of color feel in the state and nationwide, it would require a “mutual understanding of why we need change as much of a discussion of how we need to go about that change.”

“I think … some of us need to get into the water before we swim, and we need to do it sooner rather than later, myself included,” Inslee said.

Change would be more than just police or judicial reform, but a “comprehensive effort” to address inequities in economics, education, healthcare and housing for people of color, he said.

Inslee mentioned news that the Pierce County Sheriff’s Office was investigating the death of Manuel Ellis, a black man who died while restrained by police in Tacoma back in March. He said he would be pushing for a “full and complete investigation” into Ellis’ death.

Inslee acknowledged that Ellis’ death and the investigation would lead to elevated feelings, which he said were to be expected given the current situation.

“At the very moment when our community is crying out for racial justice, to have an incident like this is going to cause people (to have) a very strong response. That’s human. That’s natural. And we ought to expect it and understand it,” Inslee said.

Inslee also mentioned a recent video that emerged that appears to show a Washington State Patrol trooper saying to other law enforcement “don’t kill them, but hit them hard” at a protest in Seattle.

“The language (the trooper) used was not in keeping with what we expect of our state patrol officers,” Inslee said, noting WSP had since made a public apology over the incident. The governor said he had asked WSP Chief John Batiste to “fully review that situation and make any appropriate response that is necessary.”

Acknowledging that law enforcement is a challenging profession that especially in potentially violent protest situations could prove difficult, Inslee said there must be “high levels of standard” for WSP troopers in their conduct. He expected a “robust discussion” on any reforms to policing in the state, acknowledging that “the cry for justice is profound and deep.”

The governor also pointed to past reforms such as voter-approved Initiative 940, which he said made sure there were independent investigations of police misconduct matters among other reforms. He said it would be important to “make sure the initiative is actually applied” with thorough investigations and “appropriate” criminal charges filed.

“It’s a matter of actually doing it rather than saying it,” Inslee remarked.

Regarding the use of tear gas and flashbangs by police at protests, Inslee said it wasn’t for him to make specific law enforcement decisions.

Inslee encouraged every law enforcement agency to use tactics that create “the minimal level of risk to citizens in any protest context,” adding he hoped any agency would “think twice” before using things that could create greater risk.

Inslee hoped to find a way to make “a legitimate and necessary effort to bring more racial justice to our society and reduce this unnecessary police violence” while still addressing violence at demonstrations. He said that an adversarial concept of justice was not the answer, calling for discussion to find common ground.

“We’re not going to succeed bringing more justice and peace to our society if everybody gets into their trenches and their bunkers,” Inslee said, adding the issues shouldn’t be looked at as two “teams” competing against each other.

“That’s just not going to be productive here,” Inslee said.

‹ WDFW Question of the Week: What should I do about problems with bears? › Valley Fair cancelled for 2020