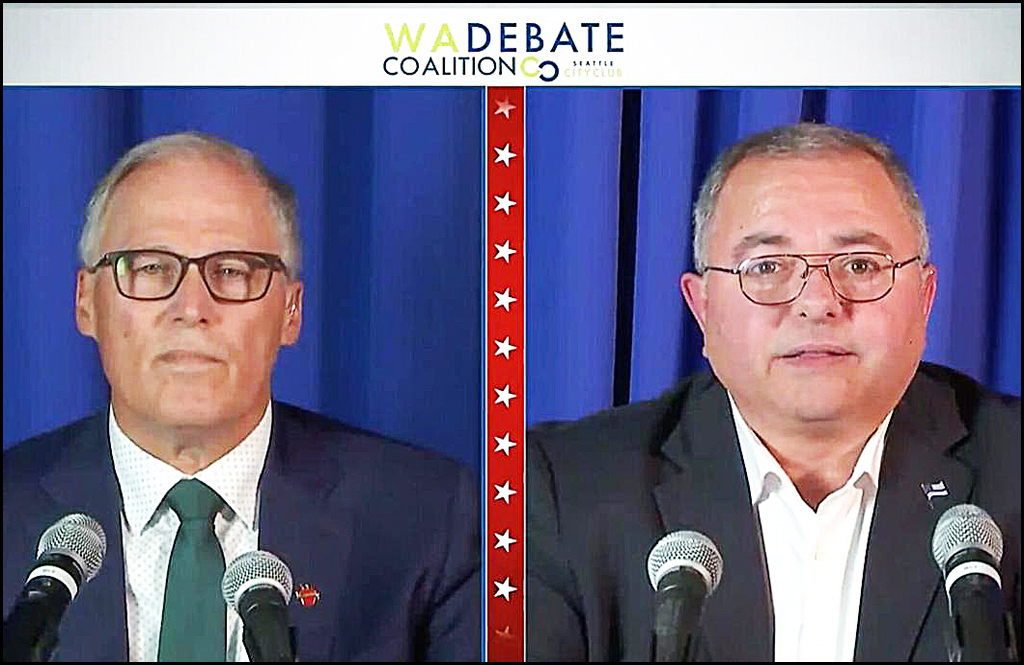 Democratic Gov. Jay Inslee, running for a third term, and Republican challenger Loren Culp, first-time candidate and small town police chief, hashed out their vastly different views on everything from climate change to systemic racism on a debate Wednesday night.

From the start, Inslee made clear his focus on the pandemic, which has killed more than 2,000 Washingtonians so far. Culp has flouted the governor’s restrictions to curb the spread of the virus, holding rallies with hundreds of unmasked supporters. While jabbing Culp, Inslee also presented an optimistic view on the public health crisis.

“There’s good news here, because this is working,” he said. “Because Washingtontians are not listening to Donald Trump, and frankly Chief Culp. They are wearing masks, they are socially distancing, and as a result of that we have lowered our infection rate dramatically.”

Culp has condemned the state’s mask mandate and said he would lift restrictions as governor. During the debate, he framed business restrictions as lacking in common sense.

“You can’t tell me that a barber with one customer in his store can’t cut that person’s hair safely and protect him and his customers, but a marijuana store and an abortion clinic or a big box store is okay to open with 100 or 200 people in it,” Culp said.

“It’s too dangerous to have a mini Trump right now in the middle of the pandemic,” Inslee said. “That’s what’s at risk.”

The candidates also fundamentally disagree on the basic role of the governor.

Culp, who dropped out of high school and earned his GED, trumpeted his experience as a drill sergeant in the military, a business owner, and a police chief as proof of his own leadership experience, saying “I’ve been in leadership positions my entire life.”

However, moderators pushed back, asking why the first-time candidate is qualified to run the entire state and its multi-billion dollar budget. Although Culp is Republic’s chief of police, he is also the only officer in his town of about 1,100 people.

In response to how he would grapple with such a large budget, Culp said he would slash funding.

“We’re not going to have any new programs, no pay raises, no new equipment,” Culp said. “Then we’re going to take a look and do programmatic cuts from the bottom up.”

However, Culp also called for improved resources for mental health and addiction — something Inslee argued would require increased funding.

“The fundamental problem of Chief Culp, when he talks about this issue, is his party and his president want to take away health insurance and mental health insurance from 800,000 people,” he said. “And whenever we actually talk about wanting to pay for this, they want to cut the budget.”

Moderators questioned Inslee on a slew of incidents of mismanagement of state agencies, including the decertification of Western State Hospital and recent unemployment fraud that cost the state over $500 million. Inslee said that Washington was not the only state to be targeted by the “sophisticated international ring” of fraudsters and said the massive surge of unemployment claims overwhelmed the state agency and led to undetected fraud.

“Sure, there are racists among us and we need to root those people out when they commit crimes,” he said.

Culp also noted that one of his “best friends” is an immigrant from Kenya and now owns a company — an anecdote he framed as the American dream that should be available to everyone.

On the issue of police violence, neither candidate gave a solid answer on qualified immunity — a doctrine that can protect abusive police officers from civil suits.

Culp denied that qualified immunity is an issue, and demanded moderators provide an example of an officer being reinstated after an abuse. When moderators provided the example of Seattle Officer Adley Shepherd, who was reinstated after punching a handcuffed woman in the face, Culp said he didn’t know the details of the case, and that “anytime an officer abuses their power they should be held accountable.”

Inslee did not say he would end qualified immunity, but cited the state’s new task force to address police use of force.

“Rather than run out and propose solutions to all of these things myself, I’ve decided to listen to the citizens,” he said. “And so we have a task force, it’s led by the Black community. I think listening is pretty powerful right now.”

Culp largely framed Inslee as “soft on crime,” accusing the governor of disarming the national guard before deploying them to cities that saw civil unrest this summer. Inslee and moderators refuted the claim, saying local officials themselves requested that backup not bring in extra firearms.

“I will never, ever send our young men and women in uniform into a violent situation without means to protect themselves and other people,” Culp said. “And when people are committing crimes, the national guard will assist the local law enforcement to arrest the criminals and put them in jail where they belong.And the rest of the people involved will be told to disperse because it is a riot, and if they do not disperse they will be arrested as well. That’s how you deal with crime.”

One last notable disagreement was on climate change — an issue Inslee campaigned on for president. Culp denied that climate change had anything to do with recent forest fires, and moderators brought up his musing of the conspiracy theory that fires were a coordinated attack.

“I don’t have any evidence,” Culp said. “It’s kind of suspicious that all those fires started at the same time with no storms going on.”

Culp’s attempt to skirt around the issue of climate change drew criticism from the incumbent.

“To have someone run for governor in the state of Washington following Donald Trump over this cliff and into the abyss on climate change, I believe is just unacceptable in our state,” Inslee said.