How plowing works in Stevens County 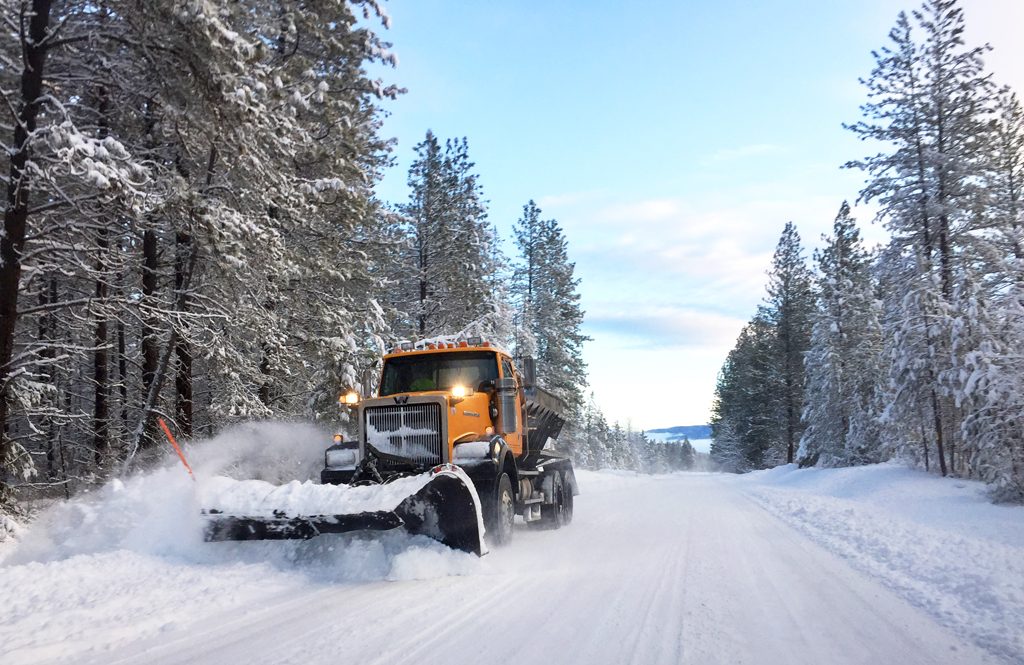 A Stevens County snowplow works on Quarry-Browns Lake Road outside of Chewelah in 2018. (Brandon Hansen photo)

MOBILE IN THE SNOW: How the county and City of Chewelah deal with snow and what you should expect…

It keeps falling on Stevens County year after year, and in order to keep the arteries of transportation and commerce open, the county has a winter maintenance plan in place to contend with the elements.

According to the Stevens County Public Works Department, the county has primary roads which are the priority in case of a storm event.
What constitutes a storm event? A storm that produces greater than two inches of snow, freezing rain causing hazardous driving conditions and other weather conditions.

Primary roads include all paved roads and high traffic/heavily used gravel roads. Normally it takes the county’s fleet of snow plows eight to eleven hours to plow. Sanding is a different story and can sometimes take the county two days to get all these routes sanded. Plows get started no later than 5 a.m. following an overnight storm event. If weekend storms occur, a partial crew may be mobilized if conditions warrant their use on primary paved roads only and then service to all other roadways will be accomplished during normal workweek time periods.

Additional plowing and sanding on primary roads will occur again and then plows move on to secondary roads on the third day after a snowstorm which include all other gravel roads that weren’t designated as primary roads. This timeline does change if snow storms continue to hit the area day after day.

“It is not possible to clear snow and sand secondary roads until all primary roads have been cleared and sanded,” the county’s maintenance plan states. “Non-Winter maintenance roads are gravel roads, which, because of limited resources and infrequent use, receive no regular winter maintenance.”

You may have seen the signs, they say “No Winter Maintenance Beyond This Point.”

The county said it uses minimal quantities of salt (sodium chloride) in its sand piles to keep the sand piles from freezing solid in the winter.

“With regular washing and maintenance of vehicles, significant corrosion is not generally observed,” the county’s policy said.

When it comes to driveways, expect the snowplow to push snow into it. There is simply no way around this.

Sometimes your mailbox may get hit by a snow plow. In this case, Stevens County is committed to replacing the damaged or destroyed mailbox. The county, however, will not replace a mailbox if it was the snow ejected from the plow that hit and damaged or destroyed the mailbox.

The county also urges people to make sure cars, trucks, trailers, garbage cans and other personal property is parked off the roadway to allow for plowing.

It also asks that you keep a safe distance from snow removal and sanding equipment, slow down and only pass them when safe.

CITY OF CHEWELAH PLOWING
Chewelah has three plow trucks, one grader, a loader and two “haul” dump trucks to handle the snow load. The guideline for having all hands on deck is four inches of snow. City employees come in at 3:30 a.m. to avoid traffic and get the highway, hospital and school zones cleared first.

City employees wake up at 3 a.m. to monitor snow depths when snow is expected. When the city has less than four inches, they start the plowing and sanding an hour early. The priorities for the city are the highway, hospital, schools, arterials, residential roads and then the airport. The city also does its best to push equal amounts of snow to both sides of the street so that no one has more snow to remove from their driveways than their neighbor across the street. It doesn’t always work that way, the city admits, but they try to do their best. While variables can change times, when the city has a full crew, they can usually plow all the roads once in 12 hours if they come in early.

Any car parked longer than 24 hours that causes a safety issue with the snow plows or prevents the street from being plowed can be towed.