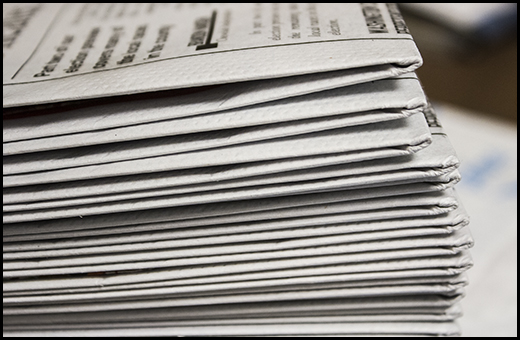 We all like to marvel about how far the human race has come since clay huts on the Fertile Crescent. We like to think we’re the most advanced thing ever since we have things like skyscrapers, electric cars and iPads.

And to be honest, it’s not like dolphins are walking around with Fitbits and getting lattes at Starbucks.

But with all this self-importance, could we take a step back and admit we’re ridiculous. Some would call it being humble or grounded.

It appears the more news you follow and the more history you read, the overwhelming evidence is that humans don’t know what they are doing, and might be making it up as we go.

-We’ve been reduced to typing on keyboards on social media about how there was once a day when we didn’t type on keyboards on social media for attention.
-We base a person’s value solely on the size of his pickup lift kit.
-After tightening a load on a trailer, it’s physically impossible not to pat the item getting transported and go “yep, that’s not going anywhere.”
-Dad jokes in humans are not learned, they’re hereditary. Also, each dad gets issued New Balance shoes.
-We prefer one hand to the other, for no good reason, since a human who can use both hands equally is much better off. Left-handed people should be extinct because back in sword and shield days, their hearts were exposed and not behind a shield. Now they’re paid millions in major league baseball for being freaks of human nature.
-Humans have to recite in their head “righty tighty, left loosey” in order to tighten or loosen a bolt. Every time.
-Someone parking an inch over a designated parking spot line incites unrelenting rage in 99.9 percent of the rest of the population.
-We have invited small furry feline creatures into our homes, despite them not being domesticated. If they were a smidge bigger they would eat us. I know, my cat laid out what it did to a chipmunk as a warning.
-The only reason we have big, heavy blankets in bed is protect ourselves from the closet monsters. Otherwise, you could sleep without covers at room temperature.
-Complain that other people are destroying the environment while driving a car in traffic for three hours a day.
-Pretending like someone else liking Game of Thrones puts you in the cool nerd club of just two people despite it being the highest rated TV show of all time or something.
-Doing the Tim Taylor man grunt despite the fact that “Home Improvement” hasn’t been on the air with new shows since the Clinton administration.
-Men annoy their wives sometimes because they think it might be fun to annoy their wives. This is never a good idea.
-We dress up nicely for church, but ask youself, is God ever depicted wearing nice Sunday slacks?
-We act like we know our national politicians personally and get personally insulted when somebody you know doesn’t like them. Even though you never have, nor ever will, meet them.
-Remember, spinners were a brief fad for like four months.
-Actually vote for people who just have cool last names.
-Think of all the dumb warning signs you have seen in your lifetime. Now remember, someone had to get hurt to warrant said warning sign.
-We have small sections of grass for which the sole purpose is to look good for your neighbors and tell the world you’re being a lazy pile when its not mowed.
-There are people out there that say “Yeet Yeet” and “YOLO”…. still.
-We talk about the weather for a total of years once it is all added up in our liftime.
-If someone is known as Tommy their whole childhood, there is a .02 percent chance they’ll be known as Tom as an adult.

So the next time you take yourself too seriously, remember, you’re one of us.