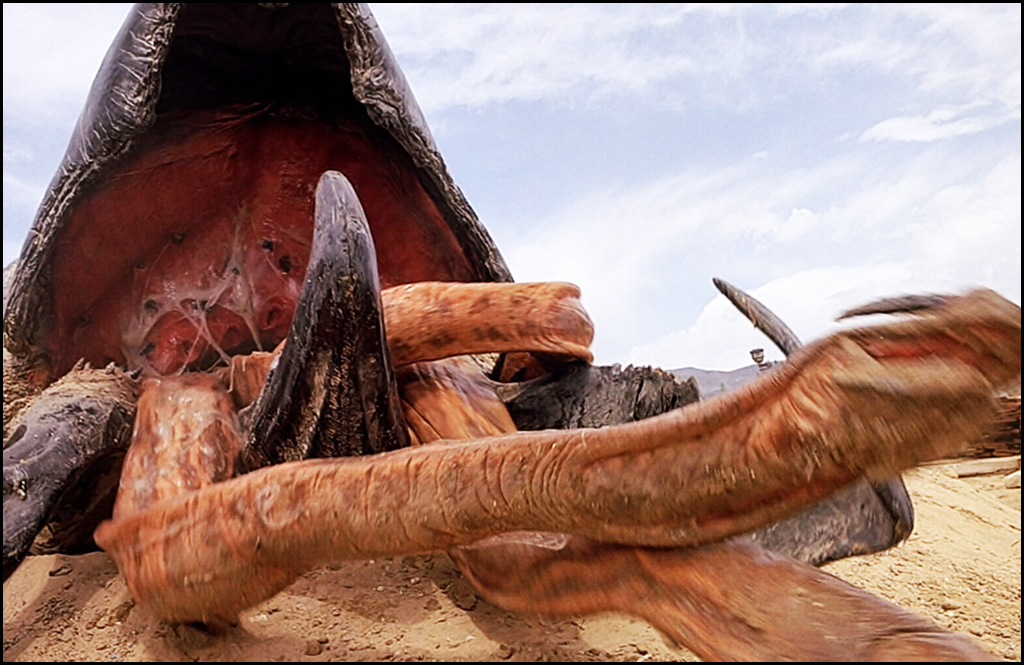 I really do apologize for the four to five years that your opinion page has been hijacked by a glasses-wearing nerd who has steered the editorial page away from national politics grandstanding to top ten lists and satire.

But here we go again, to really kick off 2020 with one of the most ridiculous articles to grace the Chewelah newspaper, here are some lessons “we can learn from the movie Tremors.”

What is Tremors, you ask? Tremors is a 1990 American monster comedy film where people in the small desert town of Perfection, Nevada fight for survival against giant, worm-like monsters hungry for human flesh. It stars a very young Kevin Bacon, and was basically on repeat on satellite TV over and over from 1995-2005.

Why is this important now? Well, let’s get started.

ALWAYS TRUST THE RURAL PEOPLE WHO ARE PREPARED
Reba McEntire is in the movie, starring alongside her onscreen husband Burt. The two are seen as the town’s doomsday preppers with too many guns. But when said worm-like monsters show up, guess who saves the day? The doomsday preppers. This is why in Chewelah I am always nice to our various Stevens County Doomsday preppers. You never know when it’s going to hit the fan, and you’d rather be in good with the prepared people.

WILDLIFE CAN BE DANGEROUS
I watched this film thinking these “graboid” worm creatures that terrorize the town, kill a bunch of people and are the movie’s villians are probably endangered species. There were only a few of them around the valley, so does this mean they need to be protected? Does a whole program need to be set up? What poor WDFW officer has to manage those things? I know we like to pretend like we’re in control of nature and animals aren’t dangerous, but let’s be honest, if graboids actually existed, I don’t think we’d see “Save the Graboids” bumper stickers anywhere.

WILDLIFE CAN BE GROSS
No movie ever illustrated how gross monsters can be better than this thing. People get hit with slime and bitten. It’s one of the few movies where I feel like I can smell how gross monster worms are.

STEVENS COUNTY PEOPLE THINK EXACTLY LIKE THE PEOPLE IN THIS MOVIE
I swear I have met every single person in this movie while living in Stevens County. Okay, people are exactly like the people in the movie. They solve the issue with guns, explosives, some fatal trial and error and a bulldozer. If that isn’t Stevens County, I don’t know what is. I know the movie is set in Nevada, but it probably could have been set in our county as well.

ONE WAY IN AND OUT OF TOWN IS A BAD IDEA
People of this town are separated from the rest of society when the only route into and out of the valley is closed down because of a landslide. Anyone who has been stuck on Highway 395 when both lanes are closed can attest to this feeling. It’s not even monster worms that cause this either, it’s just the fact we have a two-lane highway as a major artery for NE Washington. Who thought that up?

1990s MOVIES ALSO SERVED AS SURVIVAL GUIDE FILMS FOR MANY STEVENS COUNTY KIDS
Let’s be honest, how many kids after seeing this movie had a slight fear of walking on dirt and stuck to standing on rocky bluffs for a while? This movie taught me all I needed to know about what to do in case of a monster worm outbreak. Ghostbusters II taught me always make sure you check the tub before hopping in (pink goo scene, everyone at the age of 30 has this burned into their physche), Indiana Jones and The Last Crusade taught us not to drink water from religious relics, the Alien movies taught us not to stick our heads into places we shouldn’t and Gremlins showed us not to give our pets water after midnight.
These instructions were invaluable in creating the well-balanced adults we are today and the reason I still sleep with the lights on.

OWNING AN ELEPHANT GUN IS A GOOD THING
I think this might actually be the most pro-Second Amendment movie I have ever seen. If WA State ever recommends banning elephant guns, I will be the first to point out we need them for the inevitable monster worm invasion.

EVERY SMALL TOWN NEEDS A KEVIN BACON
Very underrated in his performance here, I would argue that Kevin Bacon peaked in this movie and never got any better. Rural towns like Chewelah need more Kevin Bacons to fight off monster attacks and perhaps get the town elders to let us dance.
What is the point of the article? This is the part where I ask the Chewelah Creative District to get one of the thousand Tremor sequels filmed here because I want to blow stuff up.