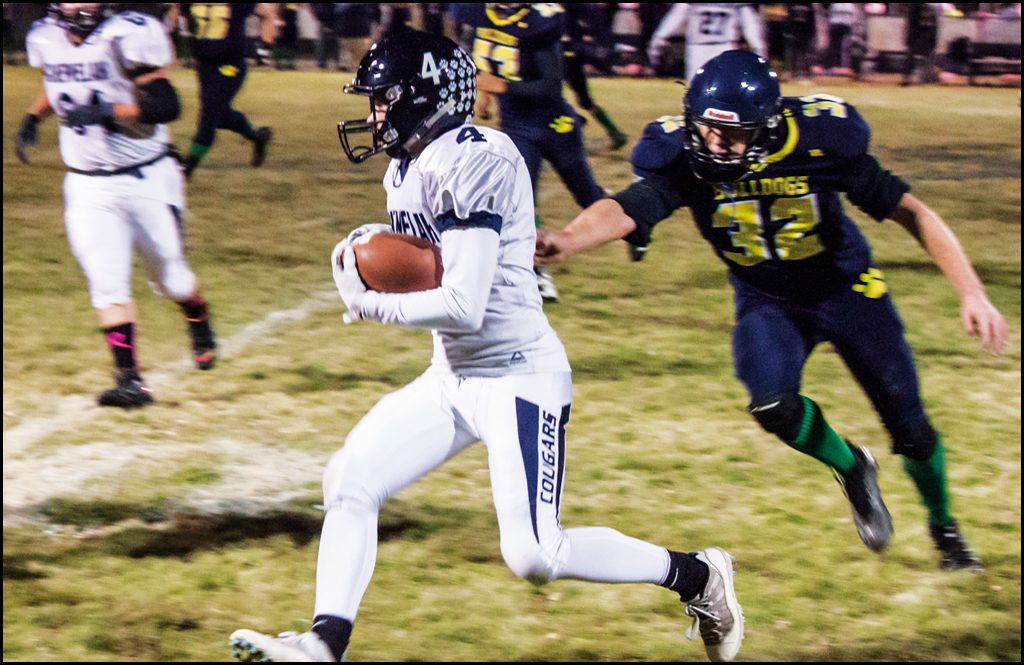 There comes a time when all of the pieces finally fit seamlessly together. When all of those repetitious, monotonous drills done in practice over several weeks—wax on, wax off—become ingrained auto functions on the playing field. That occasion occurred for the Chewelah Cougars at Kettle Falls last Friday night when they scored in almost every conceivable way to put 50 points on the scoreboard in the first half while limiting the Bulldogs to minus-17 yards of total offense for the game.

With all of the elements of Coach Cameron Gump’s restructured defense embedded into mental and muscle memory, along with a balanced attack from Coach Jim Fisk’s enhanced offense, the Cougars steamrolled the homestanding Bulldogs 50-6. The win was the first in northern division play for Chewelah, with only Northwest Christian and Davenport remaining on the schedule. The Cougars are currently 3-4 overall, but 1-0 in league play. Victories over the Crusaders (0-7) and the Gorillas (4-3) would give Chewelah a winning season at 5-4 going into postseason play.

The Cougars scored nine times, all before the intermission. They scored three times on the ground, twice through the air, two times on kick returns, twice on safeties, and once on a pass interception return. The came only a field goal away from ‘scoring for the cycle’. Gump benched his starters before halftime and let the reserves play the entire second half. Those younger Cougars played Kettle Falls to a 6-6 standoff, scoring just before the break.

Kettle Falls is a youthful team again this year. Coach Loren Finley is building the future of his Bulldogs around 16 sophomores and a half-dozen freshmen. There are only four seniors on the roster. The Dawgs are taking their lumps again this year, but they are planning on being the team that starts dishing out some bumps and bruises next season, led by a nucleus of five veteran juniors. They travel to Oroville (1-6) this Friday. Hopefully, Coach Finley and his Bulldogs will bring home a needed win.

Chewelah’s defense was in bad cat mode throughout the game. Altogether, 24 Cougars contributed to a total of 57 combined tackles and assists, including 13 behind the line of scrimmage and three for no gain. They restrained the Bulldogs to minus-25 yards rushing for 21 carries and eight yards passing from one catch out of eight throws.

The first Kettle Falls possession set the tone for the game. The Bulldogs returned the opening kickoff to their 20-yard line and went backward from there. Jake George and Cole Davis stuffed a toss sweep for a loss of six yards. Kaden Krouse and Nic Shierloh then sacked the quarterback for minus-11 yards, forcing the Dawgs to punt from their own endzone. The kick failed to launch as Shierloh slashed through the line like a hot knife through butter and tackled the punter for a safety and a 2-0 Chewelah lead.

As a result of the safety, the Bulldogs had to free kick from their own 20-yard line. The punt was fielded by Krouse at the Cougar 36-yardline and he rambled down the home sideline 64 yards for the first Chewelah touchdown of the game. The extra-point kick by Sam Triplett spread the lead to 9-0. 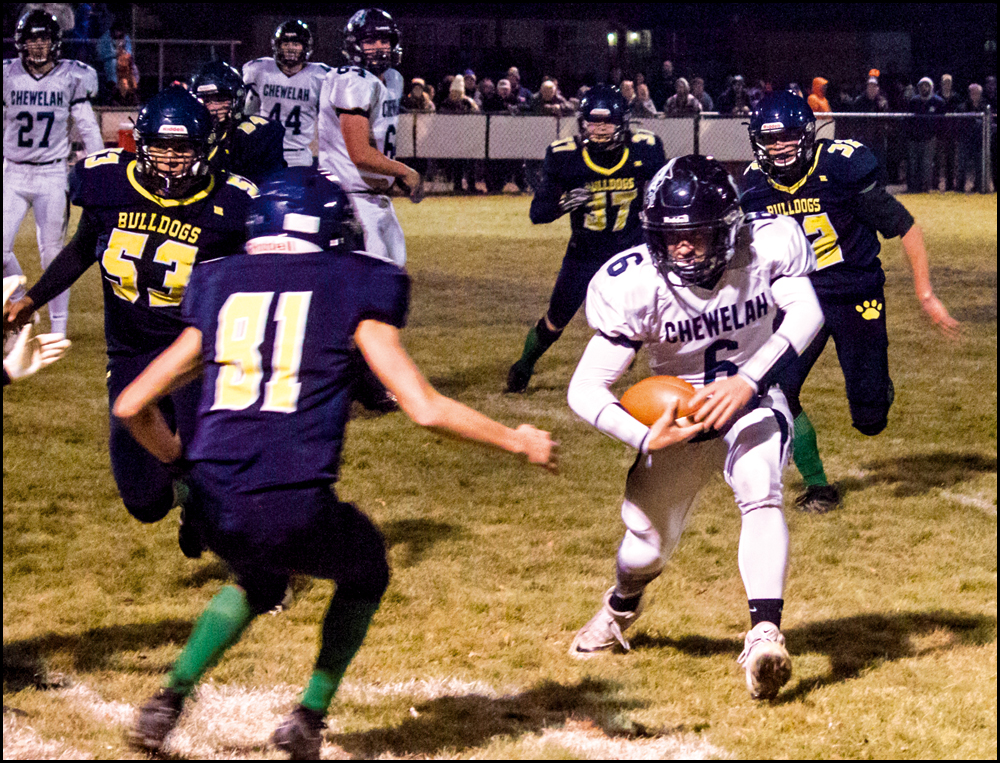 The next Kettle Falls possession also ended in a punt, with Jaron Baldwin returning it 43 yards for what appeared to be another Cougar touchdown. However, a penalty negated the return. Three plays later, Jake Jeanneret threw a screen pass to Krouse who ran the ball across the goal line following blocks by Baldwin and Andrew Sweat. The extra-point kick missed, but Chewelah now had a 15-0 lead.

Tackles behind the line of scrimmage by Davis and Kruz Katzer forced the third Kettle Falls punt of the quarter. Bowen Middlesworth ran a sweep to the Bulldog two-yard line, but the ball was brought back on a penalty. Runs by Jeanneret and George, plus a 22-yard sprint down the sideline by Krouse advanced the ball to the Kettle Falls 15-yard line. Krouse again got the call with Davis and Gunnar Hofstetter opening the barn door for the Cougar fullback to gallop into the endzone untouched for a 21-0 lead at the end of the first quarter.

The second quarter mimicked the first. Team tackles in the backfield by Shierloh, Triplett, Krouse, Hofstetter, George, and Michael Palmer left the Bulldogs in another punting situation. Baldwin caught the kick near midfield and motored 55 yards to bring the ball home. Alex Funk’s PAT kick extended the Chewelah lead to 28-0.

The ensuing kickoff by Jeanneret rolled all the way to the Kettle Falls one-yard line, leaving the Bulldogs with their backs to the goal post. Three plays later, Shierloh made his second solo tackle in the endzone for another safety and a 30-0 Cougar lead.

Chewelah scored two more times before Coach Gump benched his starters. George rammed his way across the goal line from 10 yards out and Funk added the extra-point kick to widen the Cougar lead to 37-0. Middlesworth then intercepted a Bulldog pass and returned it 32 yards for another touchdown and a 44-0 lead.

The Cougar reserves started where the starters left off. Tackles by Nick Skok, Isaac Cook, Cole Piepgras, Parker Anderson, Sam McCunn, Joey Jones, Jasper Mack, and Eli Larson led to another Kettle Falls punt and then a turnover on downs. Beginning with the ball on the Bulldog 34-yard line, Katzer ran to pay dirt in two carries, scoring on a 26-yard cutback. His touchdown lifted Chewelah to a 50-0 halftime lead.

Cougar starters remained on the sideline through the entire second half. On the field, Chewelah’s younger players held their own. A pass from Zach Bowman to Clay Jeanneret netted 19 yards and a run by Zach Cloninger gained seven yards, but they never had a sustained drive. Cody Gilroy recovered a Kettle Falls fumble and Brandon Hunter-Lee had a tackle for no gain.

The Bulldogs scored near the end of the game on a 47-yard run by Nick Anderson but the extra-point kick was blocked by Piepgras as Chewelah notched the 50-6 triumph.

The Cougars travel to Northwest Christian this Friday to face the Crusaders who are rebuilding this season after losing several veteran seniors to graduation last spring. They are currently 0-7 after being shut out by Lake Roosevelt last week. Kickoff time is 7 p.m.

‹ VOLLEYBALL ROUNDUP: Colville goes the distance for win, Kettle Falls downs Dragons, Mustangs run all over visiting Republic › Chewelah gearing up for postseason meet in the Bs at Harrington