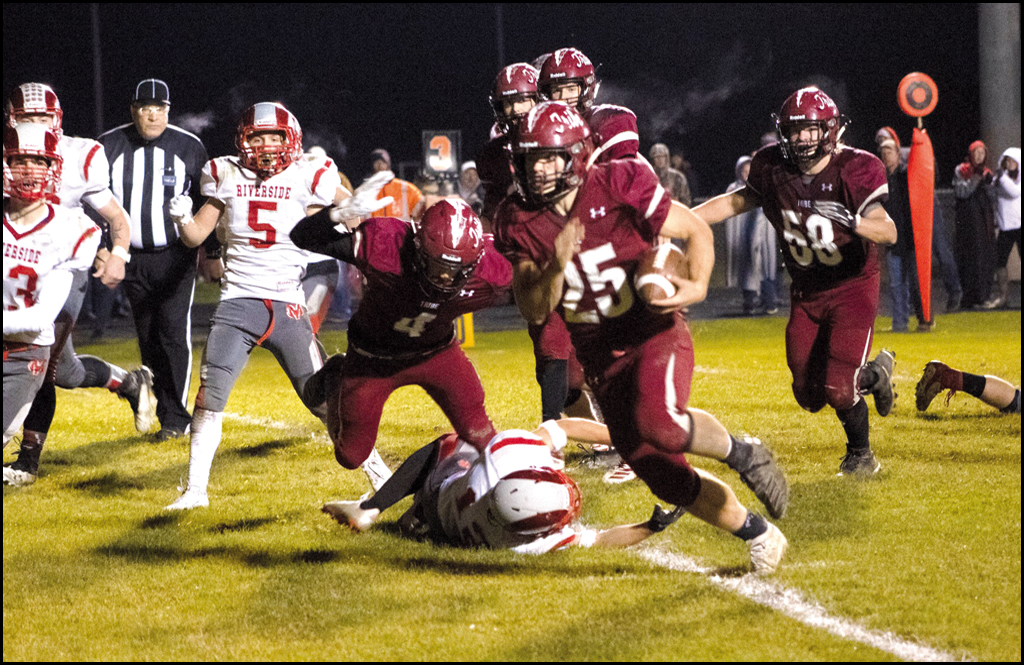 MY OH MY: Michaeliszyn runs for career high 267 yards, Anderson runs in game-winning TD against Riverside….

Move over Bruce Willis, the Colville Football team could probably handle Hans Gruber and walking barefoot on glass, too.

The action hero that is Grant Michaeliszyn rushed for a career-high 267 yards and three touchdowns, and Colville kept their postseason flame burning brightly with a 34-28 win over powerful Riverside on Friday night.

“I’ve never rushed that many yards in a single game before, but I’ve also never been in a game like that,” Michaliszyn said. “This game meant a lot to us, especially the seniors. If we didn’t come away with the W our season would not go into playoffs. We want to make this season as long as possible.”

Indian quarterback Sam Anderson scored the game-winning touchdown in double overtime to lift the Indians to a 4-2 record and, more importantly, a 2-1 league record.

The game was tied 7-7 as possible cyborg Paul Skirko hauled in a 13-yard touchdown pass from Anderson. After a Riverside score in the third, Michaliszyn ripped off a three-yard touchdown run and a big 75-yard scoring play.

“The 75-yard run was more simple than it looked, we knew what the defense was doing and how far inside they were playing so I knew as soon as I hit the secondary I could make a cut outside and take off,” the running back said.

Still, Riverside answered back, and a touchdown run forced overtime in the NEA League battle at Colville.

Michaliszyn scored first on a 10-yard run, but Riverside threw a 25-yard touchdown pass to extend the game. That was when Anderson ran in the game-winning score.

“That wasn’t my touchdown, it was the teams,” Anderson said. “We had to come together and it took everyone. We pounded the ball right up to the touchdown line with Grant and all I had to do was follow my big guys to victory.”

Anderson called the win crucial and The Independent feels he came up big, passing for 118 yards and scoring two touchdowns.

Colville won the game despite the distraction of it being homecoming.

“It was a crucial game we had to win so we were all dialed in and focused on the game,” Anderson said. “Then afterwards we could celebrate and have homecoming after we got our job done.”