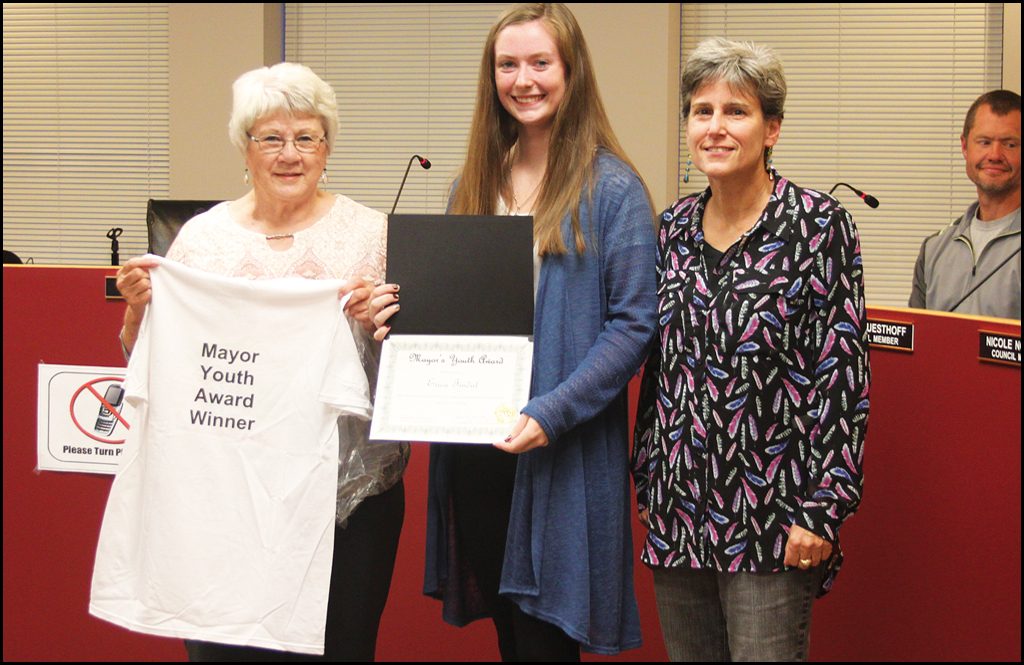 Erica Tindal, a junior at Jenkins High School, was given the Mayor’s Youth Award at the Oct. 2 Chewelah City Council meeting. “Erica doesn’t hesitate to help others in the classroom or on the court,” the nomination letter read. Mayor Dorothy Knauss (left) presented her with a certificate and a t-shirt while Clerk Pam McCart gave her $25 Chamber Bucks sponsored by the Chewelah Chamber of Commerce. (Jared Arnold photo)

A builder’s proposal to find an alternative method to guarantee sidewalk construction on his property subdivision did not gain much traction at last week’s Chewelah City Council meeting.

Mike Bellevue, who owns the “Lovejoy” property near the city park on the southeast corner of Lincoln Avenue and North 3rd Street East, asked in a letter to the city’s building official Bruce Barone that he be allowed to utilize an alternative form of guarantee for sidewalk construction on his subdivision project. Previously, Bellevue was told by city officials that in order to get final plat approval he would either need to build the sidewalks on the east and west sides of the property or provide a bond to guarantee funding of the sidewalk construction within five years.

Bellevue suggested in his letter that he be allowed to transfer the sidewalk requirement from the plat approval process to the certificate of occupancy after the home construction is complete but before the home can be sold and occupied. He argued that this method of guarantee is “far more iron clad security that sidewalks will be installed” and that it makes more sense in the construction process. The proper time to build sidewalks, Bellevue said, is after heavy machinery is finished on the jobsite and the driveway location is defined according to the final home design.

Bellevue, who also owns Bellevue General Contracting and Chewelah Painting, purchased the approximately one-acre property in 2016 from the Lovejoy family and remodeled the existing 1921 home in 2017. He was granted preliminary plat approval to create an additional four lots on the site where he plans to build two-bedroom, two-bath homes with garages. But the sidewalk requirement has since been a major sticking point between the builder and city officials.

Bellevue also suggested that Chewelah is in desperate need of additional housing options for “young families, seniors and professionals relocating to the area.”

“Through responsible development the city realizes exponential revenue generation through a larger real estate tax base, utility connection fees, building permits, monthly utility fees and an increase in sales taxes from additional families shopping locally and contributing to our local economy and community,” he argued.

Citing state law and guidance from the Municpal Research Services Center, City Attorney Mike Waters quickly shot down Bellevue’s theory that tying the sidewalk requirement to the certificate of occupancy was “iron clad,” noting that the city’s hands are tied according to its own code and state law.

“The problem with that is it’s not a secure method [of guarantee] as the language is interpreted. The best example I can think of, is if the whole enterprise were to go belly up,” he explained. He emphasized that he did not believe that that was a possibility on this project, but that it was a “theoretical, legal possibility.”

“In which case, the city would be stuck with a platted, unimproved section of land with no sidewalks and no guaranteed funding for those sidewalks,” Waters said. “So while I thought it was a well thought out, seemingly reasonable request by Mr. Bellevue, all the legal analysis would indicate that it is not lawful under the statute.”

Councilman John May made it clear that he was not interested in considering Bellevue’s proposal.

“In view of the fact that we have these rules and regulations in place prior to things being done within the city, I would suggest that we just refuse this request,” May said.

Councilman Evan Schalock, who is a real estate broker, appeared sympathetic to Bellevue’s situation and expressed a desire to help kickstart some more building in Chewelah.

“I would love to see some more housing built in Chewelah. We’re seeing a lot of housing built up at the golf course, and not so much down here. It would be great to put some houses in there, but from what [Waters] is saying, what [Bellevue] is asking from us is not even possible,” Schalock said.

“This is clearly a request to minimize expenses, which is what all developers do. I don’t have a problem with that, but the council should understand it as such,” Attorney Waters reiterated.

“That’s the reason we have these things in these codes, is so that they don’t get too many opportunities to take too many shortcuts. If you’re going to put a fireplace in your [home], it’s gotta be put in according to code. If you’re going to subdivide a piece of property inside the city limits, one of the things you have to do is continue the sidewalk,” May argued.

Councilwoman Cori Wuesthoff inquired about the possibility of changing the city code to allow alternative forms of guarantee for subdivision improvements.

“Is there a way to re-visit the code that we currently have? Because if we have other developers come into town and want to improve our town, bring in more tax base, all of that stuff, is there a way to take a look at that and possibly amend it?” Wuesthoff asked.

“I would not like to re-visit this. If a developer’s going to put in something, and he does it, and then there are no sidewalks, and the sidewalks have to be put in, then you and I are gonna have to pay for it. The developer should have to do that and that should be part of the cost of the development, and hopefully he’s going to redeem that cost when he sells the property. That’s what I think about it. I don’t want to pay to build a sidewalk on Mr. Bellevue’s property,” May responded.

“I’m just looking for solutions to make it easier to do business with the city. We need to work cohesively with people in order to do that. So how can we make that easier? Is it possible, or are we just not going to budge?” Wuesthoff asked again.

Mayor Dorothy Knauss said that the city code would need to be changed and that neither the council nor the mayor can simply set aside the rules that are in place.

Waters cautioned the council about changing the city code to satisfy a single complaint.

“Just making it easier for one person, in my recommendation, is not a basis for modifying the code,” he said, noting that the council should study the economics of the situation.

Councilwoman Nicole Norvell, who is a professional engineer, noted that the development standards and requirements that Chewelah uses are no different than other towns.

“It is no different from any other town or city in the entire United States, basically,” she explained. “We are not out of line in requesting these things at all.”

At the end of the discussion, the council chose not to act on Bellevue’s request.

The next regular city council meeting is scheduled for Wednesday, Nov. 6 at 6:30 p.m. at the Chewelah City Hall.