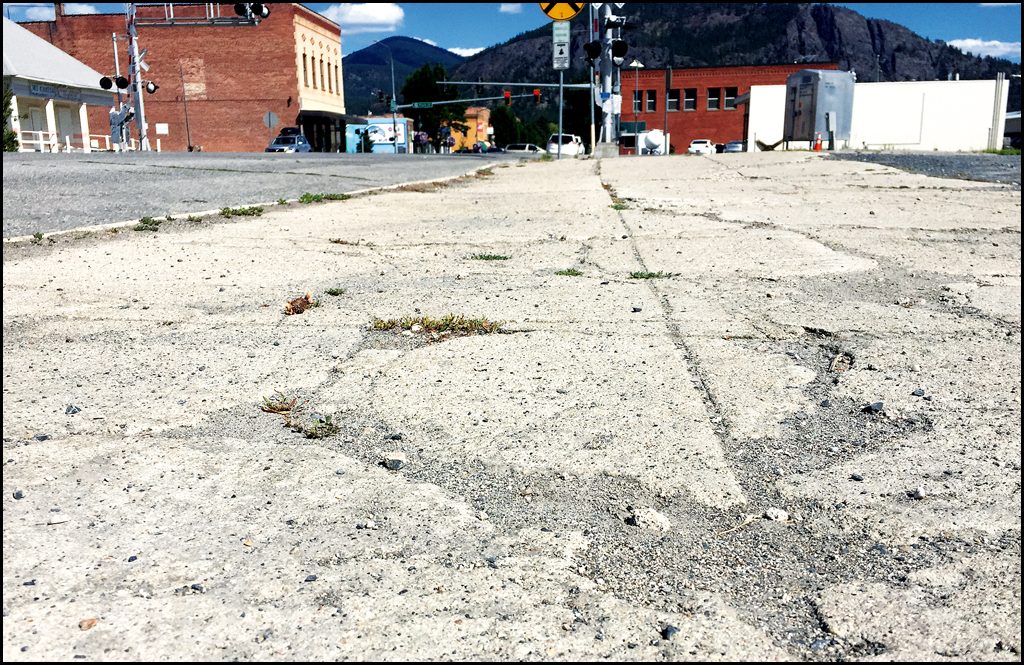 Sidewalk construction will begin around some of Chewelah’s busiest areas. (Brandon Hansen photo)

Sidewalk construction around Chewelah’s busiest intersection will begin next month after the city council unanimously awarded the contract to a local builder at their meeting last Wednesday evening.

Baumann Brothers Construction of Chewelah was awarded the contract for $428,598 to build new sidewalks on both sides of South Park St./Hwy 395 for one block between King Ave. and Main Ave.; both sides of West Main Ave. from Hwy 395 to approximately Quartzite Brewing; and the east side of Stevens St. between Main Ave. and Lincoln Ave.

Construction is expected to start during the first week of September.

The sidewalk projects will be funded by a grant from the state’s Transportation Improvement Board (TIB) and an approximately $30,000 match from the city. TIB funds come from revenue generated by three cents of the statewide gas tax.

The South Park St./Hwy 395 sidewalks will include lighting identical to those used between King and Robert Aves.

The West Main Ave. portion will have features similar to those existing on East Main including light poles, tree wells and an irrigation system for hanging flower baskets.

The Stevens St. project is set to include the removal of the older trees that have caused an uneven sidewalk surface and replacing those with new trees.
City Administrator Mike Frizzell explained in an email to The Independent how the projects fit into the city’s overall sidewalk priorities and how the projects will improve pedestrian safety.

“These projects were chosen the same as previous sidewalk projects. We try to pick the projects that will have a positive effect on as many citizens of Chewelah as possible. All the sidewalk projects and their prioritization have been chosen based on a planning grant [the city] received years ago that we used to perform a sidewalk study. This study prioritized the most needed areas for sidewalk improvements,” Frizzell stated. “The improvements to West Main will also provide a better environment for business expansion west of [Highway] 395.”

Frizzell cited several benefits for pedestrians and the overall community including “a safer, more walkable downtown; a nicer looking business district; improved lighting for pedestrian and car traffic; improved access to businesses; and a much safer sidewalk system on Stevens St. which currently has some heaving of approximately six inches.”

Eventually, Frizzell noted, the city would like to extend the sidewalks and atmosphere further down West Main to 2nd St. West, but that will require the replacement of the bridge over Chewelah Creek and much more funding.