Chewelah volleyball playing some of their best ball as postseason looms 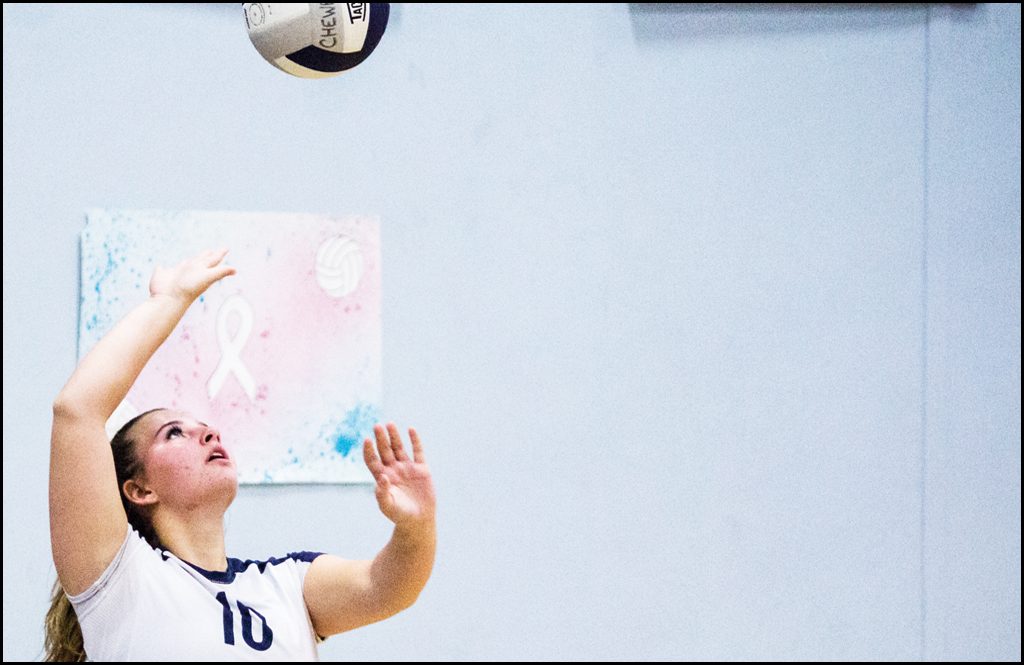 GETTING BETTER: Cougars are strongly in second place of the league standings and looking like they can challenge Northwest Christian…

Chewelah’s Lady Cougars got a close look at both ends of the league’s northern division spectrum last week when they faced the undefeated Northwest Christian Crusaders on Tuesday and then hosted the cellar dwelling St. George’s Dragons on Thursday. The Cougars exhibited improvements in several facets of the game against the Crusaders (9-0), winning one set and going into extra serves in another, but fell 3-1 to the division leaders. Thursday night’s match against St. George’s (1-8) lasted less than an hour as the Cougars sent the Dragons back to their weyr in straight sets.

Staged in a backdrop of pink, the Lady Cougars made short work of the visiting Dragons, defeating them in three sets: 25-8, 25-12, and 25-13. Lilly Kirry hammered 13 kills to lead the Chewelah front row and Elle Carpenter set 30 assists as Cougar hitters overwhelmed the Dragons at the net.

“We have improved significantly this second half of the season,” Said Coach Kaya Landers. “You can see it some in the scores, but where it really shows is in our execution of plays. You can also see it in the stats. For example, against St. George’s their setter had two assists and their kill leader had two kills.”

Chewelah pounded its way to a 14-1 lead in the first set against the visiting Dragons as Kirry spearheaded the attack at the net while Mia Bellevue served a pair of aces. Haven Rainer and Natalie George joined the fight in the front row with kills that stretched the Cougar lead to 20-5. Ace serves from Taya Tapia and Jessi Macrae added the final points for the 25-8 win.

Chewelah continued its barrage in the second set, pulling away from a six-all tie to take a commanding 20-7 lead that included a string of 12 consecutive points. Cougar newcomer Kylee Dalton, a freshman who has been moved up to the varsity by Coach Landers, had two kills. Also scoring kills were Rainer, Carpenter, Bellevue, Kirry, and Maili Masuda as the Cougars finished strong to win the set by a 25-12 score.

The third set was like the first two with Chewelah pulling away early to an 11-3 lead with a nine-point run. The Cougar front row was relentless in its attack with Kirry, Rainer, Carpenter, and Masuda cranking kills. A pair of kills from Erica Tindal and a dink over the Dragon front row by Carpenter ended the set and the match in a 25-13 Chewelah victory.
Lily Kirry was the top gun of last Tuesday’s match at Northwest Christian with 13 kills, but the Lady Cougars fell short of defeating the seventh-ranked Crusaders, losing the league encounter in four sets.

Although this was Chewelah’s second loss to NWC this season, the Cougars did win a set, they were ahead in another, and the scores of the other two sets were much closer than in their first meeting. The Crusaders won the first set 25-15. The Chewelah girls had the lead in the second set, but NWC came back to win it 26-24.

The front row hitting by Kirry, Haven Rainer, and Maili Masuda powered the Cougars to a 25-18 win in the third set, but NWC finished strong with a 25-16 win in the final set to notch the match.

“We played a great match against NW Christian,” said Coach Landers. “I was very happy with our defensive effort which was part of the game plan. We made a couple of untimely errors that influenced the outcome but overall it was a huge improvement and I was proud of our team!

“Jessi Macrae had a huge game against NWC. She served tough and had 16 digs against their strong hitters which really gave us a spark. The combination of Jessi, Taya Tapia and Mia Bellevue passing the ball with Lily Kirry hitting in the front row provided some great scoring runs. Elle Carpenter also had 16 digs which is a lot for anyone, but especially so for a setter. Even though Elle is a veteran senior, she has been very receptive to what I’ve asked of her and really increased her understanding of the setter position. That has allowed us to develop a stronger offense and given our hitters an opportunity to do more. I feel confident that we will be playing our best volleyball in time for the district playoffs!”

Kirry’s 13 kills against the Crusaders led the Cougars at the net, with Rainer adding six kills and Masada scoring five. Elle Carpenter set 23 assists and had 16 digs, while Jessi Macrae had four ace serves.

In spite of the loss, the Lady Cougars still hold a strong grip on second place in the current Northeast 2B League northern division standings with only two conference matches remaining on their schedule.

They will host Kettle Falls (2-8) here on Thursday. Then, the fourth-ranked Liberty Lancers (9-1) come to Pein-Lynch Gym on Tuesday.