It was a fun evening for Chewelah Cub Scout Pack 998 as 12 scouts competed in the Pinewood Derby on March 28 at Gess Elementary to see who had the fastest downhill racer.

The handmade cars are less than seven inches long and less than five ounces in weight. They race on a four-lane, 42-foot wooden track, competing in each lane at least once to determine the fastest overall. Each heat takes about three seconds from start to finish. Cub Scouts, with help from a trusted adult, build their cars at home before the derby using the Scouts BSA approved pinewood derby kit. The Chewelah Scouts received an official kit from Santa Claus at their Christmas party in December.

The Pinewood Derby tradition, which is something that most all Cub Scout packs organize annually, has a main goal of teaching these young scouts (grades K-5) good sportsmanship while having fun in competition. It also teaches creativity, design, how to use tools and problem solving skills as they build and paint their individual cars.

Pinewood Derby cars can be painted and shaped however the scouts want as long as the cars do not weigh more than five ounces. This year, cars included a school bus, a pickup truck, a Minecraft Creeper, traditional race cars and even a slice of pepperoni pizza. Some vehicles were driven by Lego minifigures. 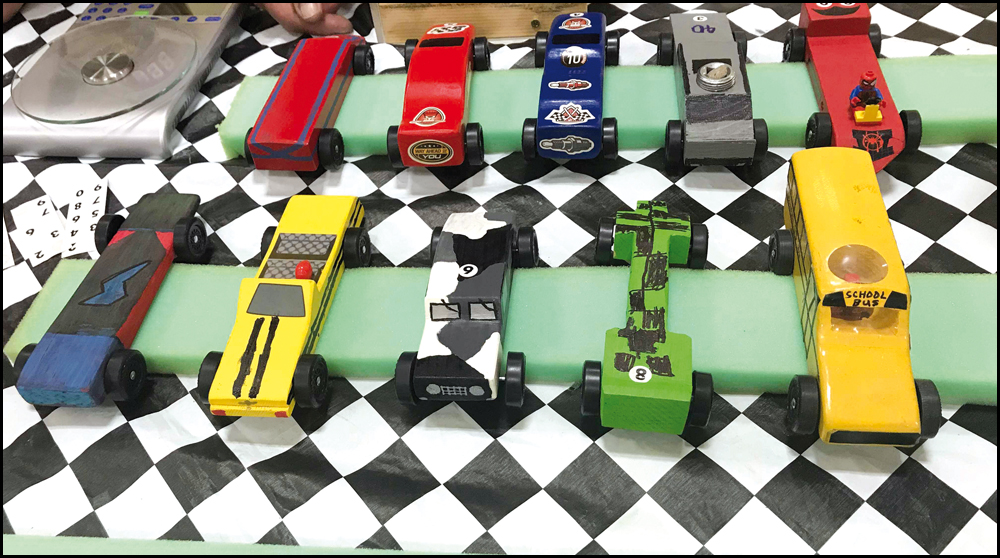 All the Cub Scouts appeared to have a lot of fun together as they watched each heat of the race. They high-fived and jumped up and down, yelled and congratulated each other as the cars sped down the track, no matter who was ahead.

This was the first year for Cubmaster Joe Trudeau to organize the Pack 998 Pinewood Derby. He said that he appreciates the dedicated parents and volunteers who helped their Scouts build their cars, as well as those who helped on Derby night.

Joe would especially like to recognize his father, Brian Trudeau, for his help in making the Derby a success this year. Brian is an experienced Cub Scout leader who organized the Pinewood Derby for Spokane Pack 171 for 10 years with as many as 70 cars competing each year.

The week of the race, Brian built a new section of the wooden track to lengthen the distance and added an end piece that uses thick foam to give the cars a soft stop at the finish line. He also built award plaques for all the Scouts who competed this year as a way to be able to display their car.

Cub Scout Pack 998 meets monthly on the fourth Thursday of each month with 14 active Scouts in kindergarten through third grade. Each den, assigned by grade, meets at least once a month but sometimes weekly to complete a variety of Cub Scout Adventures and receive Belt Loop awards. 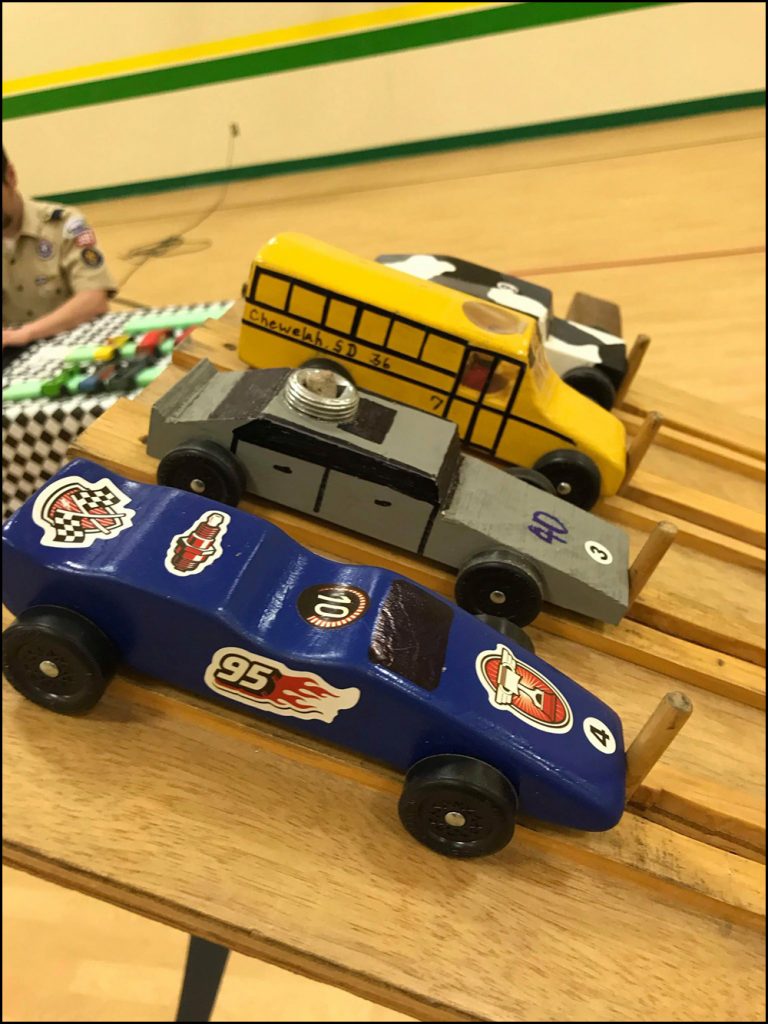 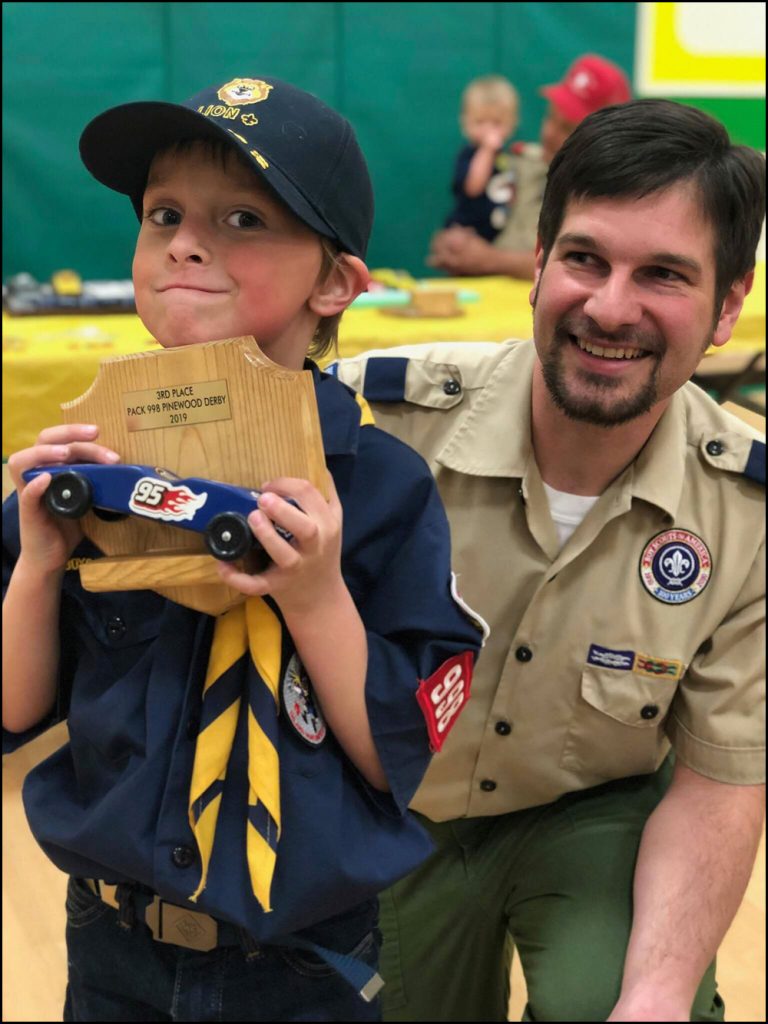 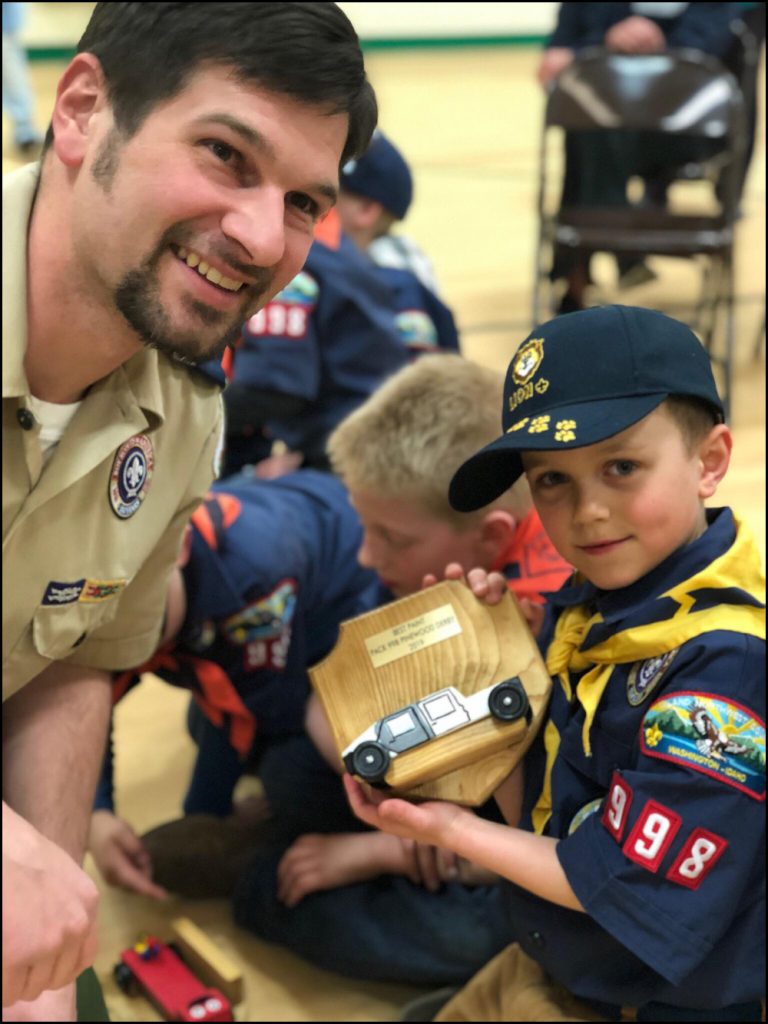 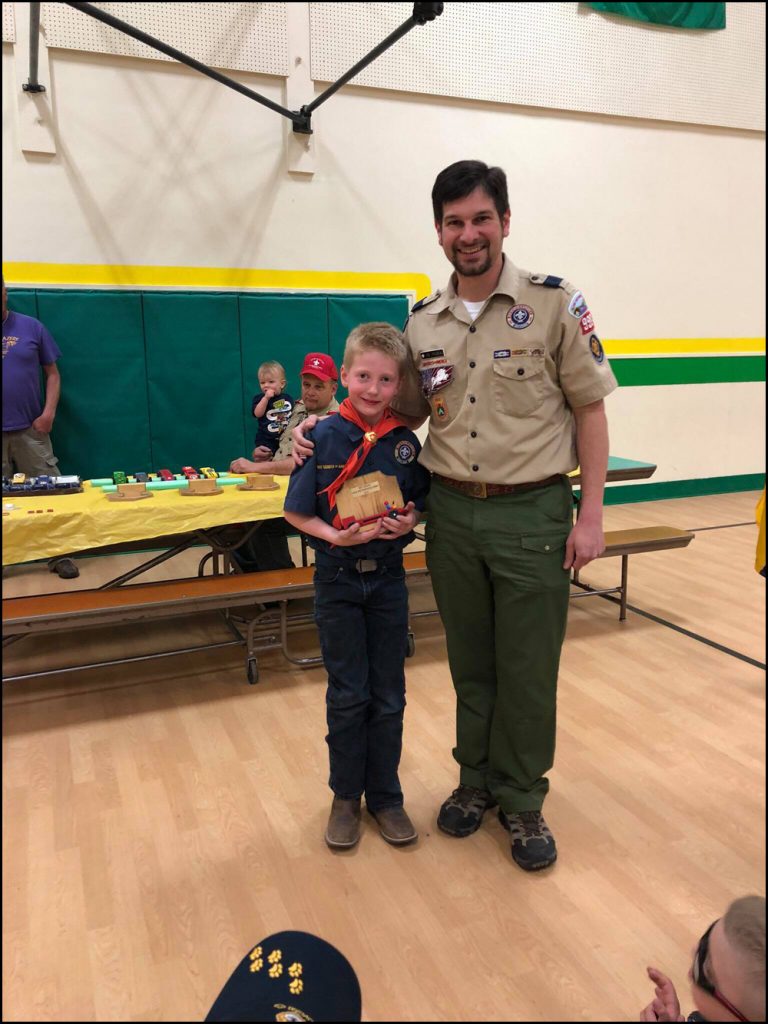 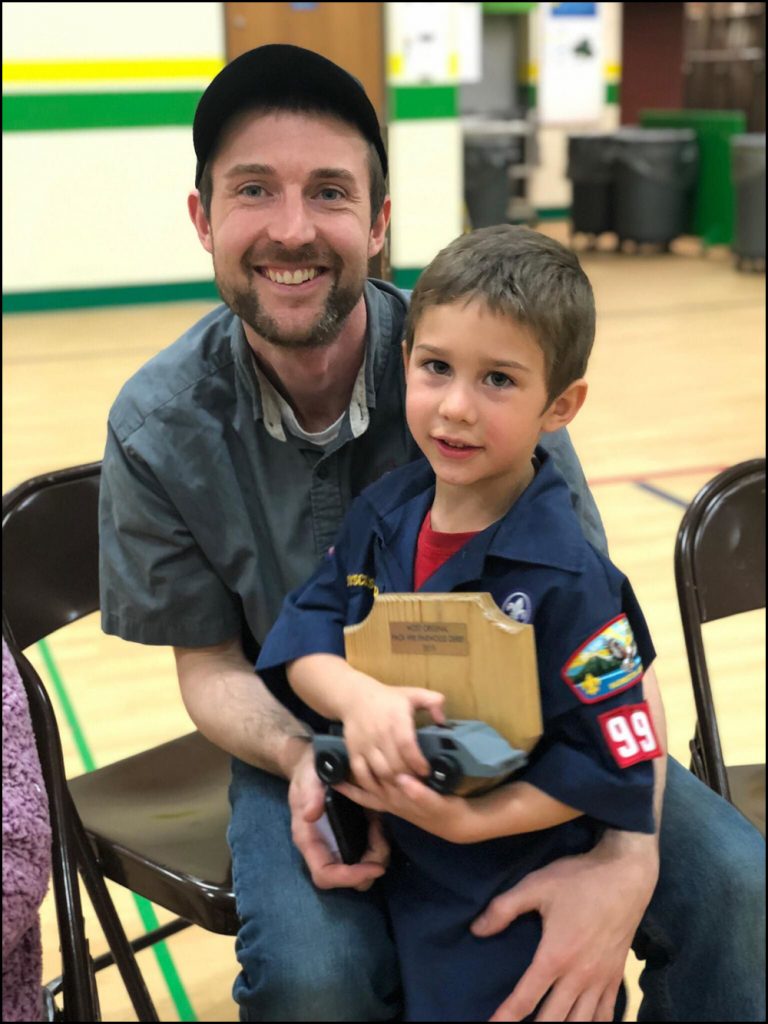 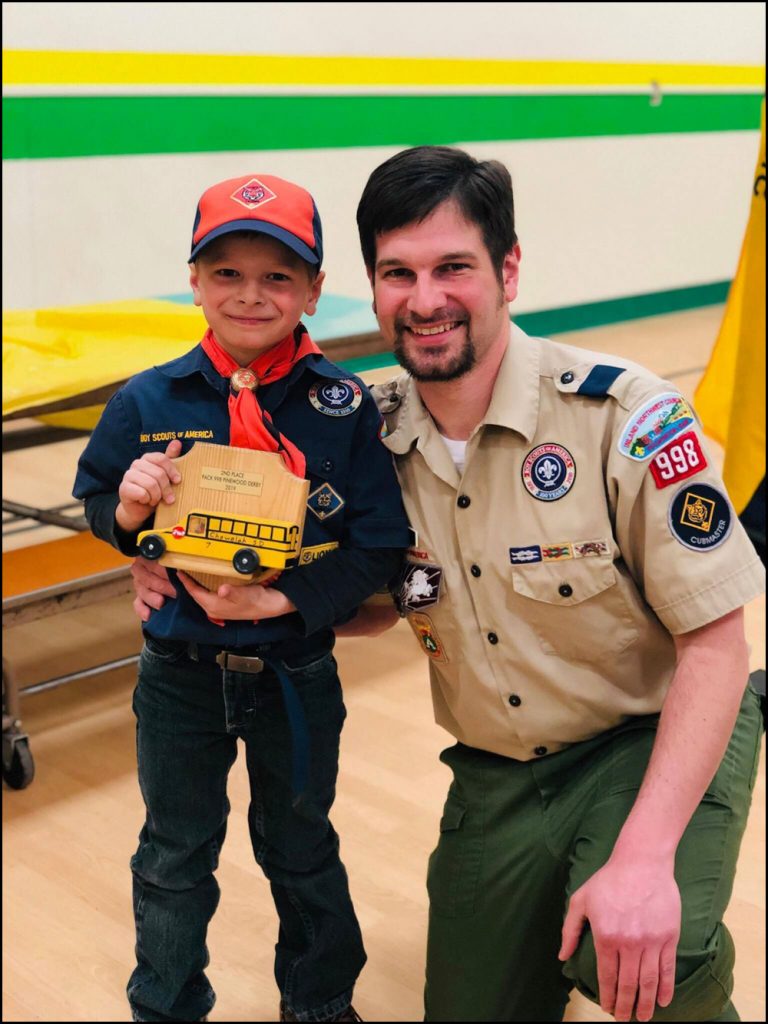 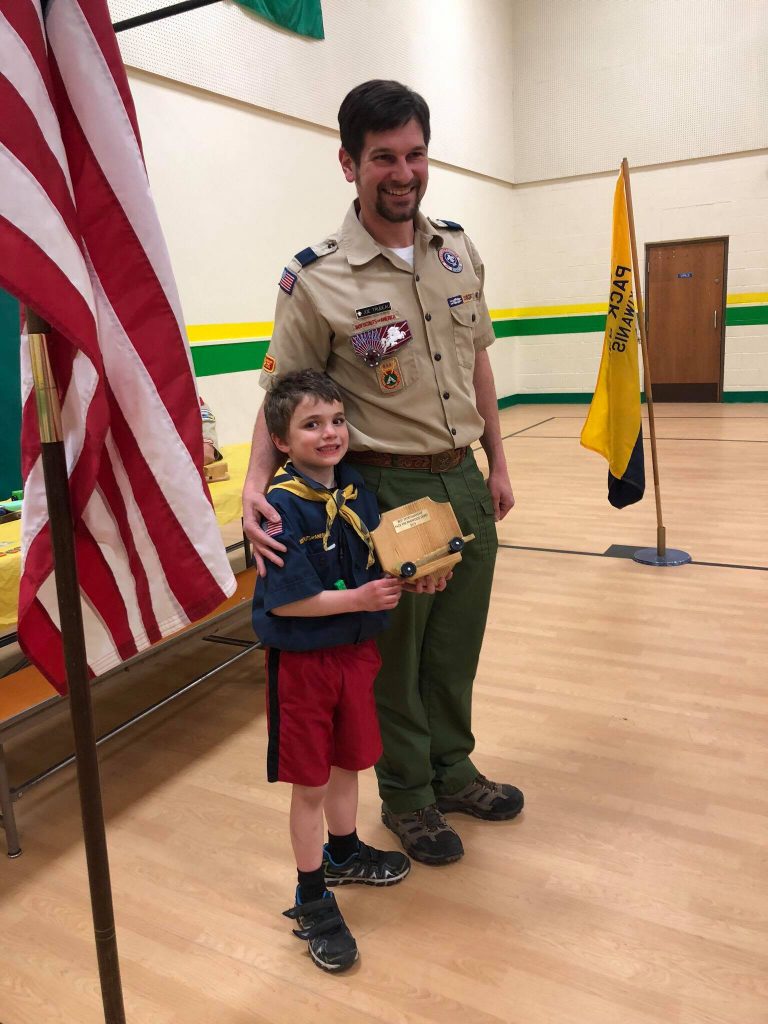