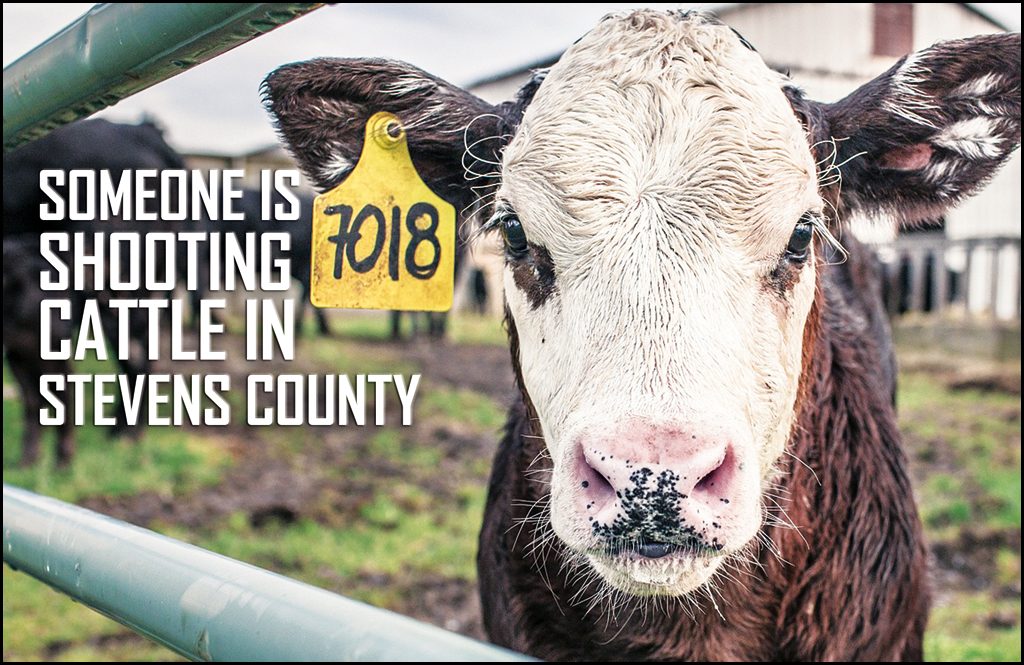 The Stevens County Cattlemen are now offering a $15,000 reward for information resulting in the arrest and conviction of someone shooting cattle in Stevens County and NE Washington.

Cattle producers in the area are finding perfectly healthy cattle dead in fields and after further investigation, feel they were caused by shootings.

The Stevens County Sheriff’s Office is currently investigating the issue, the Cattlemen said, adding that they even received a visit from the FBI’s counter terrorism unit on the issue. Cattle ranging even right by the town of Valley have been found dead, and the issue is, this can be hard to trace because a small caliber bullet can cause death hours or a day or two later when the cattle have moved on from the location. Another issue is it’s not immediately apparent that it’s a bullet wound.

Some cattlemen noted that this has been on the rise in both occurrence and ferocity because of increased environmental group criticism of their practices. They also tied it back to the ongoing wolf issue in Washington, saying they always seem to have cattle shot when WDFW is carrying out lethal depredations against wolves.

“Historically when we had livestock shot it was usually a hunting accident or shooting them to steal the meat,” Stevens County Cattlemen president Scott Nielsen said. “We think most of it now is retaliation because when the game department kills a wolf, some people feel the need to kill a rancher’s cow.”

Nielsen said that they can’t be for sure who did the shooting but that frankly perfectly healthy cows don’t just drop dead in fields.

He said that the sheriff’s office began using metal detectors on some dead cows to see if bullets were involved.

Cattle producers said that people shooting cattle was much more rare, and if it did happen, it was another producer upset at them, or someone trying to get the meat for free. But through the years, these shooting instances have increased and happened more frequently.

They added that combined with the wolf depredations, 33 recorded this year officially by WDFW from a producer on the Kettle Range, it’s cutting deep financially.

“You can’t financially value a cow because once it dies, you lose all those manhours, all that time you spent raising, feeding and watering it,” one producer said.

There have been several threatening phone calls made to producers during the wolf controversy and they said while it has been quiet this year, in previous years the rhetoric was nasty.

The state began not identifying producers in press releases because of this issue.

Nielsen said he hopes this makes the community more aware and hopes people keep their eyes out for any suspicous activity near grazing cattle.
Cattle have also been shot while grazing on forestland, but also on pastureland where houses can be located. The proximity of roads mean people can make passing shots.

Both cattle producers and Nielsen wondered how someone could be mad at producers for wolf lives, and then turn around take the lives of another animal.
Cattle producers said that many families rely on these cattle for a living and that shooting them and predator attacks only makes it tougher. One cattle producer currently grazing cattle in the Valley area has been at it for six generations with hopefully the new generation also moving into the business.

This isn’t unique to Stevens County a recent story came out about healthy bulls dying in Oregon under mysterious circumstances as well.

If anyone has information on the cattle shootings, they’re asked to call 680-3497 or the Stevens County Sheriff’s Office.

[Editor’s note: We chose not to identify the cattle producers for the reason stated in the article]