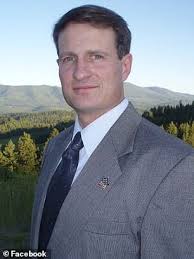 The US Marshal service will be transporting Bolton to Stevens County and the process might take up to 30 days.

The charges stem from a bizarre set of events that began in February including threatening letters allegedly left on properties in Stevens County by Bolton, demanding $10,000 in cash or physical harm would be come to their families.

According to court documents, Bolton also attacked an Assembly member, pushing him down the stairs. When he tried to get up, Bolton is alleged to have restrained him and attempted to put a plastic bag around his head. It was reported that Bolton eventually ended the assault, claiming that his wife had been kidnapped and someone was demanding $100,000 for her release.

The Assembly member stated that he secured the $100,000 by selling his stock portfolio because he did not want anything bad to happen to Bolton’s wife, but he began to question the validity of Bolton’s claim after a few days had gone by and he received emails from Bolton stating his wife had been released even though the kidnappers were still awaiting payment, the report said.

Authorities raided Bolton’s home and his office in Chewelah, but Bolton managed to elude arrest and had been on the run for several days until his apprehension.

Bolton ran for Stevens County Sheriff in 2010 but was eliminated in the primary election after receiving only about 13 percent of the vote.