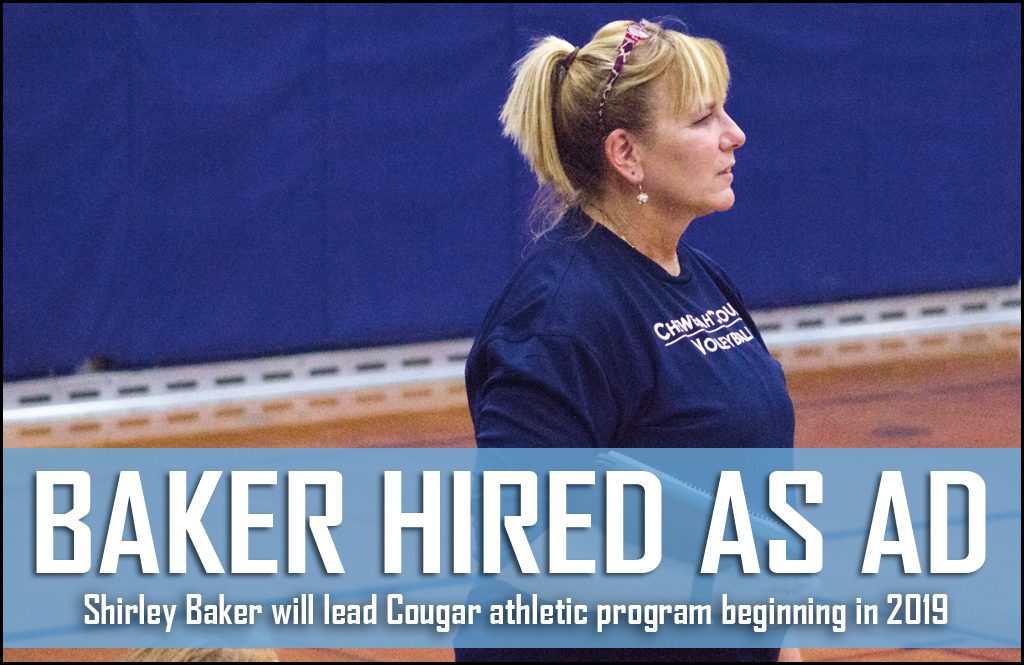 The Chewelah School Board voted last Wednesday that Shirley Baker will be the new Jenkins High School Athletic Director. If there is someone who has a resume to take the job, it’s Baker who has coached high school sports since 1990 and has been a head coach since 1995.

Baker joined Jenkins Junior Senior High School in the fall of 2014, and she has served as both the school’s head volleyball coach along with being a co-head coach of track and field with her husband Whit in the spring.

“I applied because I have ideas which I believe can build on the foundation created by Rocky Verbeck in his tenure as our AD,” Baker said.

Verbeck recently left for a similar position at Marysville on the west side of the state after helping lead the Chewelah Cougar basketball team to a league title in 2012 and being involved in JJSHS athletes for several years. Baker said that Verbeck was a great role model in showing support for all programs and making sure coaches could focus on coaching instead of the slog of administrative work.

Baker will inherit a program that had a considerable amount of success in their first year at the 2B classification in the state. League titles, deep runs in the state postseason, a few state championships and much more competitive seasons by all Cougar teams have showed that the emergency drop down from a year ago appears to be the right move.

“The fact that so many students do participate in sports is a real positive for our school and our community,” Baker said. “Our athletes are held to high standards in terms of their academics and behavior so our athletic programs reinforce the development of citizenship among our young people. Our success in the 2B ranks is another huge builder of school pride, which again, buoys esteem within our youth and our community at large.”

Baker will step down as head volleyball coach as a result of the move, as she will have to change her schedule to focus on the things that an AD has to deal with.

“I will be at 99 percent of our home contests, which I already attended a lot of them because of my boys’ involvement in sports and band, but now I will be in charge of a lot more rather than enjoying the night as a spectator,” Baker said. “I am really excited to support all of our athletes at their contests and to be available for our coaching staff.”

Baker said that it is the AD’s responsibility to provide a positive experience for students by maintaining a climate of concern and respect for all students. ADs oversee the hiring of all coaches, while also working with the booster club and the athletic advisory committee. They also schedule and organize all the extra-curricular activities and facility usage.

“I think a better question is what does an athletic director NOT do,” Baker said with a laugh.

Workers at games, along with helping the Associated Student Body bookkeeper follow state finance laws, athletic eligibility and clearance and the athletic budget are also in the list of job responsibilities to name a few.

“And then there are the ‘other duties as assigned’ which could be anything,” Baker said. “Mr. Verbeck made it look easy. I will do my best to make this transition as easy and seamless as possible.”

For Baker, she also likes that along with sports creating school pride, it can also open some doors to talented athletes in the Chewelah area to move on. With several players during each season in 2019 signing to play at a college, she hopes that the Cougars can continue to produce some next level athletes as well. College educations can mean big things in an area where post-secondary education workers and professionals are needed and wanted.

“I see sports as a gateway for our students to pursue a post-secondary education which will result in a fulfilling career,” Baker said.