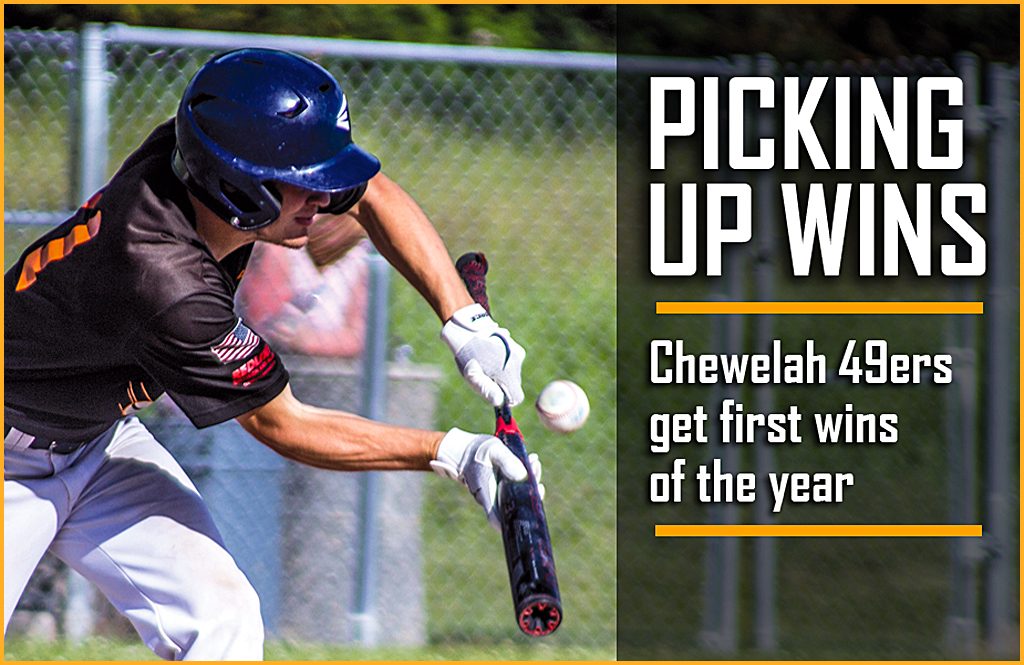 On the other hand, American Legion leagues are created solely on an age format. The size of the town or the local high school are not considerations. The only requirement is that players on a team must be under a specific age limit. To play on an AA Junior Legion team, players must be born after Jan. 1, 2001. So, it was no mistake last week when Coeur d’Alene, with its two Idaho Class-5A schools showed up to the Barbour Complex to play the Chewelah Forty-Niners. The quality of performance, however, was a definite mismatch as the young Niners could not keep up with the veteran Lakers.

As expected, Coeur d’Alene swept both ends of the doubleheader, 21-6 and 18-3. Chewelah held its own until the fourth inning in the opening game, but then the Lakers scored 10 runs in their fifth trip to the plate to run away with the scoreboard. Up until then, Chewelah kept the score tied at four runs apiece.

Of the 21 runs scored by Coeur d’Alene, only nine were earned. The rest came home due to seven Niner errors that extended the innings.

Cole Piepgras batted 2-for-3 and scored a run for Chewelah. Also swatting singles were Jake Jeanneret, Bowen Middlesworth, Coby Rancourt, Josh Piepgras and James Macrae. Rancourt scored on a squeeze bunt by Clay Jeanneret in the second inning. Macrae tagged up and came home on a sacrifice fly by Zach Bowman to give the Niners a 2-1 lead.

Cole Piepgras scored in the fifth, and Macrae singled home Kade Frizzell in the bottom of the fifth. Josh Piepgras singled and was batted in by Jeanneret in the sixth inning. Rancourt’s single brought Middlesworth home later in that inning.

Coeur d’Alene 18, Chewelah 3
Jake Jeanneret, Jack Carpenter, and Zach Bowman had Chewelah’s only three hits in the second game of the day as the Niners were beaten 18-3 by the visiting Lakers. Jeanneret hit a leadoff double in the second inning and Carpenter followed with a single later in the three-run inning. Bowman singled in the fourth inning.

Chewelah 10, Rogers 0
James Macrae threw a two-hit shutout to lead the Chewelah Forty-Niners to a 10-0 victory over Rogers in AA American Legion action last Tuesday night. The young right-hander threw all five innings as the Niners put away the Pirates early by way of the 10-run rule. He struck out seven batters without yielding a walk and pitched the Niners to their first league victory of the summer season.

Bowen Middlesworth and Cole Piepgras each hammered two singles and batted in a pair of runs for Chewelah, which totaled nine hits in five at-bats. The Niners exploded out of a hitting slump in the opening inning when they paraded a dozen batters to the plate and scored eight runs. They added two runs in the third inning to achieve the 10-run split.

Chewelah scored eight runs on only three hits in the top of the opening inning to leap into an 8-0 lead. The Niners took advantage of five walks issued by Rogers pitchers to fill the bases three times before the hits began to bring runners home. Walks given to Jake Jeanneret and Jake George, and an error on a bunt from Macrae, quickly loaded the bases for Chewelah. Three more walks donated by Pirate pitchers to Nick Skok, Sam Triplett, and Coby Rancourt sent home the first three Niner runners.

Macrae’s double in the third inning gave Chewelah the 10-run split it needed to end the game early. Kade Frizzell hit a bunt single and scored. Piepgras singled through the left side of the Pirate infield and scored to put the lid on the 10-0 shutout win.

Chewelah 8, KF 3
Jake Jeanneret struck out 11 Kettle Falls batters in four and two-thirds innings of relief work on Wednesday evening as the Forty-Niners defeated Kettle Falls 8-3 in league play for their second win of the week. The Chewelah right-hander ascended the mound with one out in the bottom of the third inning and the Niners holding on to a slim 4-3 lead. He struck out both of the batters he faced to end the threat and the inning with two Bulldog runners remaining on base. He finished the game on the hill without surrendering a walk or a run.

Zach Bowman batted 3-for-4 with two runs scored and one run batted in to lead Chewelah at the plate. Nick Skok had two hits. Jake George, Sam Triplett, Bowen Middlesworth and Jeanneret also contributed hits to the win.

The Niners got on the scoreboard first with a pair of runs in the opening inning on singles from Bowman, Jeanneret and Skok, along with a sacrifice fly by George. Coby Rancourt was hit by a pitch, moved over to third base on Bowman’s bunt single down the third base line and scored on a wild pitch to give Chewelah a 3-0 lead. Triplett, Skok and George singled in the third inning with Macrae batting in a run to give the Niners a 4-1 advantage.

Kettle Falls threatened in the bottom of the third inning. The Bulldogs scored two runs and had the go-ahead runs on base before Jeanneret took over on the mound to put out the fire. Going into the fourth inning, it was a one-run game with Chewelah on top 4-3.

The Niners scored three runs in the sixth inning and one more in the seventh to bring home the 8-3 win. Hits from Middlesworth and Bowman, along with some fancy baserunning, lifted Chewelah to a 7-3 lead. Triplett scored in the seventh inning to add another run for the 8-3 league victory.

KF 16, Chewelah 11
It did not take much time for Kettle Falls to avenge its loss to the Niners. The next day, the visiting Bulldogs took advantage of 12 bases on balls provided by Chewelah pitchers to take home a 16-11 win.

The plague affected all four Niner pitchers who climbed up on the mound with each one walking three Kettle Falls players. Seven of those Bulldog batters scored, providing the runs needed to bring home the bacon.