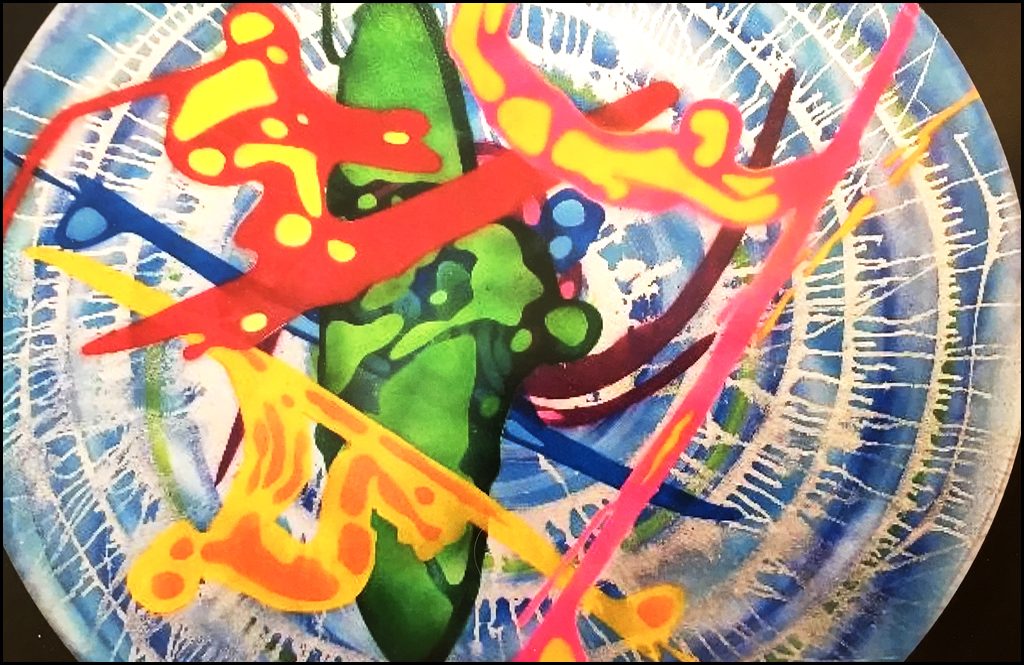 John Niciforos’ lifelong passion of art will be on display at the Trails End Gallery in Chewelah from Thursday, July 11 to August 28. Originally from Los Angeles, John has made his way through North America in the last 10 years from L.A. to Guadalajara, Mexico, New York State, Chicago, Illinois and Grand Forks, North Dakota all in the continuing pursuit of medical education. For the time being John has found a home in Chewelah working in the laboratory at St. Joseph’s Hospital.

John’s family fostered his lifelong love of art with comics, magazines like Mad and Heavy Metal and large coffee table books of classic artists like Michelangelo, Salvador Dali, Van Gogh, Rembrandt and Picasso. Raised in Los Angeles, he says he was lucky to see a variety of art in Southern California and was fortunate enough to see the Picasso exhibit years ago at the L.A. County Museum of Art. John says Picasso, who lived to be 90 years old, had his hand in most of the styles and mediums of the 20th century and continues to be a great influence.

John had his first art show in 1991 at Acme coffee shop in Santa Monica California and for the last few years has made coffee shops his “go to” as a place to show his work. John showed a few pieces at Jean’s Beans in Chewelah when he first arrived in town and he has plans to show there and at Fired Up Pizza later in the summer. John mentions the challenge of traveling with art work. Some paintings have taken 3-4 years to make because of the logistics of time and space. When he finally landed in Chewelah two years ago, he found he hadthe space to set up the paint projects he planned and dreamed about all that time on the road.

Sharing his love of art with his coworkers from Chewelah, they suggested he seek out Tim Nielsen and the Trails End Gallery who usually host the First Thursday Art Walk. So Niciforos went to meet Tim Nielsen, owner of the gallery, and the idea of the show was born. Niciforos will feature about 20 pieces, some of them 12-feet long.

“During my travels, I didn’t have room to paint, but I would always have a notebook and, with Photoshop software and a scanner, I could at least have a better idea of what an idea might look like.” John’s show at the Trails End Gallery is the culmination of inspiration he took when he found a “How to Surf” book from the 1960s with sketches of surfing form. He uses the longer paintings to show a variety of action, where some of his single canvasses combine all the action in surfing from paddling out, getting on your feet, standing riding and catching the colorful waves he creates as a back drop. The title of the show is called Tidal Waves & Wipeouts and takes inspiration from early photographer Eadweard Muybridge (1830 –1904), whose work laid the basis for motion (moving) pictures and early animation. “It was the foundation of many animators, including Disney,” Niciforos says.

“At that time (1915/pre WWI)), Cubism (Picasso/Braque) was born to reflect the idea that motion could be contained within a single picture or painting. The work that most probably reflects this idea is Marcel Duchamp’s Masterpiece “Nude Descending a Staircase.” Marcel Duchamp takes inspiration from one of Muybridge’s photographic sequences of a woman walking down stairs.
Tidal Waves & Wipeouts brings a “Muybridge style” to the steps of surfing (“those are the tidal waves”) and then combines those characters into single paintings that tumble the forms (“those are the wipeouts”).

“I hope people might see all the joys of surfing. The paintings show that whether we’re riding the wave or wiping out, we’re still having a lot of fun. That is just kind of how surfing goes.” Niciforos uses acrylic, spray paint and stencils to create his pieces and they range in color and style throughout the gallery.

“Who knows what people will take away from this, but I hope they enjoy the show like a day at the beach.