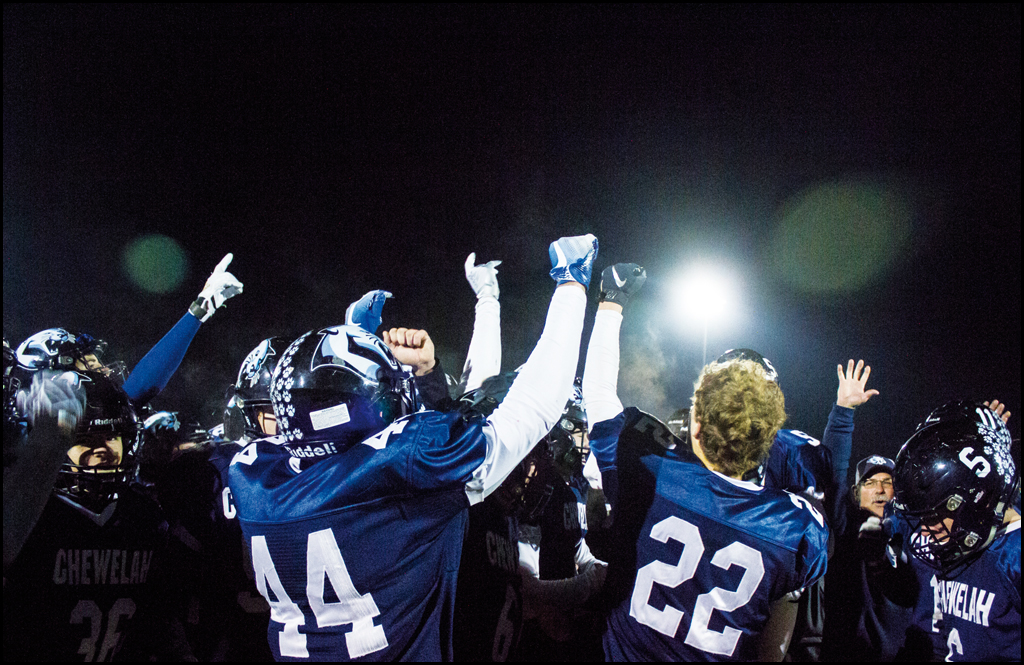 One of the four District 7 2B team tickets to the state football championships will be up for grabs this Friday night when the Chewelah Cougars host the Reardan Indians. The Cougars upended Davenport 35-15 last Friday to claim the Northeast 2B League North title, while the Indians were the victims of a 61-13 drubbing from Liberty to finish fourth in the South. The two teams will meet at Snyder Field in one of four crossover games between the league’s two divisions with the winners each receiving an entry to the state tournament.

“From now on, it’s loser-out, lose and done,” said Coach Cameron Gump. “We have to play our best or put our gear away. We have to stay disciplined, play our game, and take care of business. We can’t miss assignments or make mistakes.

“Right now we’re clicking on all cylinders. We’re playing really good football. We have a lot of weapons. It will be difficult for teams to defend against all of them.”

Chewelah made it to the state quarterfinals last year, but lost 20-14 to Napavine when time ran out before they could punch the ball into the endzone from the three-yard line. This Friday’s game will begin a postseason push for the Cougars with the goal of progressing farther in the state tournament bracket than they did a year ago.

Chewelah’s defense that was steamrolled in the early games of the season is now driving the roller.

The blue-and-white defenders put the big squeeze on Davenport Friday night, forcing six turnovers. The ground-pounding Gorillas finished the game with 244 net yards but most of that yardage was between goal lines. They ran the ball across the goal line only once. Their other touchdown came from a recovered Cougar fumble in the endzone.

The Chewelah game plan for the night was to contain the Davenport running attack using defensive ends Jake George and Gunnar Hofstetter, along with outside linebackers Andrew Sweat and Bowen Middlesworth to barricade the outside running lanes, forcing Gorilla ballcarriers inside. Coach Gump also changed to using four down lineman instead of his usual three and rolled-up one of his cornerbacks, either Kruz Katzer or Jaron Baldwin, for added outside protection. Nearly everything got funneled inside where middle linebacker Kaden Krouse made a season record 24 combined initial tackles and assists.

The result was that out of Davenport’s 55 carries, only five went for more than 10 yards. The rest were nickels and pennies.

“We had to do something different against Davenport, because they were way above our weight class,” said Coach Gump, “so we changed to a six-man front, put 10 players in the box, and dared them to run against us.

Davenport runningback Gavin Boggs had 28 carries for 124 yards, but he did not cross the goal line. He did, however, fumble away the football four times, including once when Krouse ripped the ball out of his grasp and scored from three yards out. Gorilla quarterback Marcus Delafield threw the ball only twice, with one being intercepted by Cougar cornerback Jaron Baldwin and the other falling incomplete.

Delafield also fumbled a fourth down snap that added to Davenport’s woes. In addition, the Chewelah defense recovered a blocked Davenport punt and forced the Gorillas to turn over the ball on downs three times.

“Against Lakeside, Boggs scored six times and gained over 260 yards,” sad Gump. “Holding him to 124 yards and no touchdowns shows how much we have improved defensively.”

The opening quarter was a standoff with both teams treating the ball like a hot potato. Chewelah’s initial possession ended with a punt from midfield. Davenport handed the ball right back on a fumble that was recovered by Sweat. The Cougars returned the favor by throwing a pass interception. The Gorillas then had a pass picked by Baldwin. Annie, Annie over.

Chewelah finally got into its groove on its third possession. Starting at their own 30-yard line, the Cougars scored in two plays. First, Jake Jeanneret threw a screen pass to Krouse that covered 51 yards with the help of a lead block from Nick Franks, moving the ball to the Davenport 20-yard stripe. Then, Jeanneret handed the ball to Middlesworth, who followed the blocking of George, Baldwin and Krouse to the goal line. Sam Triplett added the extra-point kick, and Chewelah had a 7-0 lead with 2:53 remaining in the first quarter.

Davenport started a long, time consuming drive near the end of the opening quarter, but the Cougars kept them out of the endzone when it died on the Chewelah nine-yard line. The Gorillas earned a first down on the Cougar 15-yard line before Chewelah hit the brakes. Middlesworth tackled a ballcarrier from behind for a one-yard gain, Krouse stopped a reverse for a gain of a yard and George and Katzer teamed up to save a touchdown on the outside. This left Davenport with a fourth down and four yards to go on the 10-yard line. The Gorillas attempted a quarterback keeper up the middle, but Krouse stepped up to meet him at the line of scrimmage for another one-yard gain and Chewelah took over on downs at the nine-yard line.

However, Davenport did not leave the Cougar end of the field without scoring. Jeanneret was unable to snag a high snap from center and a Gorilla fell on the ball in the endzone for a touchdown. The extra- point kick tied the score at 7-7.

Chewelah answered quickly. Eli Larson returned the Davenport kickoff to the Cougar 45-yard line and two plays later Jeanneret connected with George on a 53-yard touchdown pass. Triplett’s extra-point returned the lead to the Chewelah side of the scoreboard at 14-7 with 7:06 remaining in the first half.

That was enough time for the Cougars to get into the endzone once more before the intermission. Gang tackled by Middlesworth, George, Krouse, Katzer, Triplett, and Corbin Stearns again left Davenport in a punting situation. The kick hit a Gorilla player in the back, shot straight up into the air, and was smothered by Krouse. Chewelah had the ball on the Davenport 25-yard line. George shook off three tacklers and hurdled another to get the ball to the 15. Krouse took the ball the rest of the way two plays later for the touchdown. Baldwin ran the all across the goal line for the PAT, giving the Cougars a 22-7 lead with 3:05 left in the opening half.

Davenport had another time-consuming possession before the break, but it ended in another turnover. The Gorillas set up in a wildcat formation, but the snap was bobbled by the intended ballcarrier and Hofstetter pounced on it. Chewelah went into the halftime room with a 22-7 lead.

Davenport scored on its first possession after the break on a 25-yard counter play. The Gorillas added a two-point conversion on a shovel pass, cutting the Chewelah lead to 22-15. Baldwin’s fumble recovery ended one Davenport possession and the ensuing Cougar drive ended one yard short of the goal line.

They did not leave emptyhanded, however. On the second Davenport play, Chewelah linemen Nic Shierloh and Triplett halted the Gorilla ballcarrier at the line of scrimmage where Krouse ripped the ball loose and ran it into the endzone from three yards out. The extra-point kick failed, but Chewelah had spread its lead to 28-15.

Davenport did not score again. The Gorillas had two long drives in the fourth quarter, but both ended with a turnover on downs. The first one was ended by Krouse and Hofstetter when they dropped the ballcarrier for a six-yard loss. The second one concluded with a pair of tackles behind the line of scrimmage by the combined efforts of Sweat, Triplett, Stearns and Krouse.

Chewelah tacked on a final touchdown midway through the final quarter for the 35-15 victory. Jeanneret threw two passes apiece to Franks and Baldwin covering 47 yards with the last toss giving Baldwin the opportunity to zig-zag his way into the endzone behind downfield blocks from Franks and George. Triplett added the extra-point kick. The Cougars finished the game with 317 yards of offense, 116 on the ground and 201 through the air. Jeanneret had five carries for 36 yards, Krouse had nine carries for 28 yards, George had three carries for 27 yards, Middlesworth had three carries for 25 yards, and Baldwin had one run for three yards.

Jeanneret completed 12 of 25 passes for 201 yards. Krouse had five catches for 78 yards, George had one catch for 53 yards, Baldwin had four grabs for 45 yards, and Franks caught two passes for 24 yards. Davenport had 244 yards of net offense, all on the ground. Krouse led the Cougar defense with a total of 24 combined tackles and assists. Katzer had 15, George had 13, and Sweat had 10.
Rollercoaster Reardan (5-4) will visit Snyder Field this Friday night with kickoff time set at 7 p.m. The Indians have notched some big wins like their 23-22 upset victory over Colfax two weeks ago. They have also endured some big losses like their 61-13 loss to Asotin last Friday. The question is, which Reardan team will take the field this Friday night?