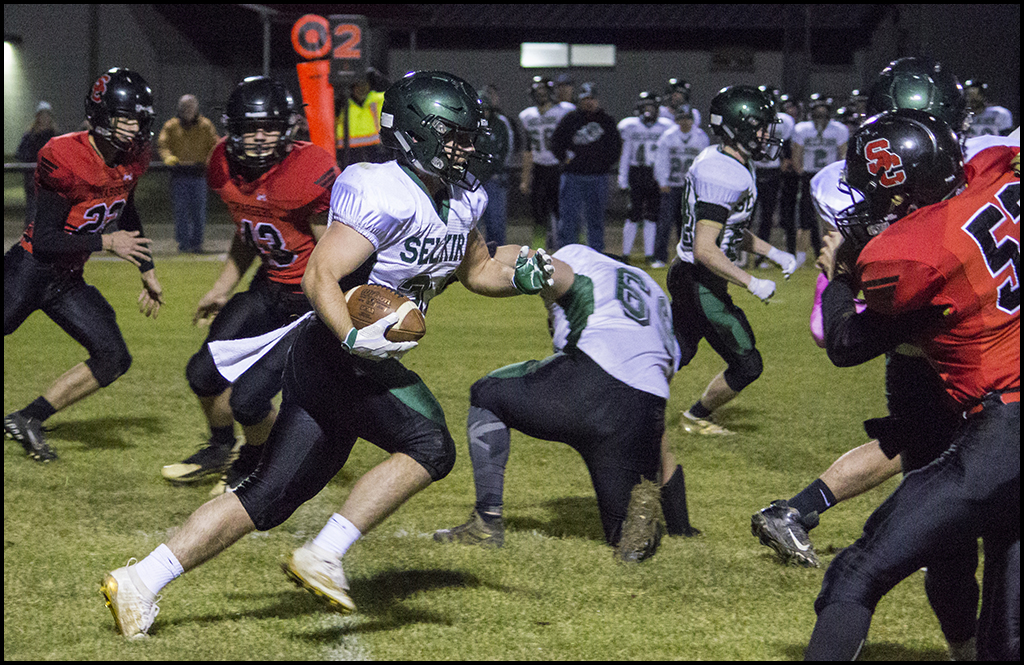 Rangers pick up 62-0 victory over Springdale…

Selkirk is cruising at this point.

The Rangers defeated Springdale in NE 1B football action on Friday by a score of 62-0 and have outscored their opponents 348-24 in the last five games. Selkirk improved to 5-1 on the year and 5-0 in league play with the victory.

What is perhaps lost in the stats is the performance of the defense, both Selkirk’s defense for being swarming and pitching their second shutout of the year and Springdale’s resilience to hang for a while with a team that is ranked No. 9 in the state.

Coincidentally, Springdale (3-4) played Selkirk nearly as tough as the No. 3-ranked Entiat Tigers in the first game of the year. The Tigers trailed 20-8 before coming back for a slender win over the Rangers, but the Chargers only trailed 22-0 after one stanza. Compared to some other 50+ and 40+ point quarters the Rangers have had this year, it does say something about Springdale’s grit.

Selkirk QB Jay Link finished with five total touchdowns including three through the air and two on the ground. The defense seemed to rack up many tackles for losses. Springdale had to deal with a neck injury to their QB Austin Paladin in the first quarter. Paladin left the game but scans at the hospital came up good. Avery Kitt and Ethan Penland did put in some good runs, but space was hard against the Rangers.

“Everybody knows their jobs we have great defensive coaches,” Selkirk’s Ty Taylor said. “They tell us exactly what we’re doing, they go over film like crazy and we go over them all in practice.”

Link got the scoring going with an 18-yard run with 8:36 left in the first quarter, which was followed by a long injury timeout due to Paladin getting hit at an unfortunate angle while going down.

Link then threw a 36-yard touchdown pass to Stephen Davis to make in 14-0 with just 3:15 left in the first. On the next Springdale drive, Ty Taylor scooped up the ball and ran it back 60 yards for the touchdown to round out scoring in the first stanza.

“I could tell it was a kind of a botched play when I was watch RB, glanced down saw the ball grabbed it and started running and heard my teammates cheering me on,” Taylor said.

In the second quarter Link ran from thirty yards out to paydirt to make it 30-0. Aiden Penney then notched a long 25-yard touchdown run, followed by another score from him, this time running from 28 yards out.

“We have so many options, our running game is just killer,” Link said. “We also have big huge receivers that just tear guys down and go for the ball, every ball I throw up for them.”

Selkirk will now gear up for an away game at Northport, while Springdale will host Hunters at 7 p.m.

“We just have keep grinding and keep working hard in practice, same thing we’ve all be playing together a long time,” Taylor said.

Or as Link says…