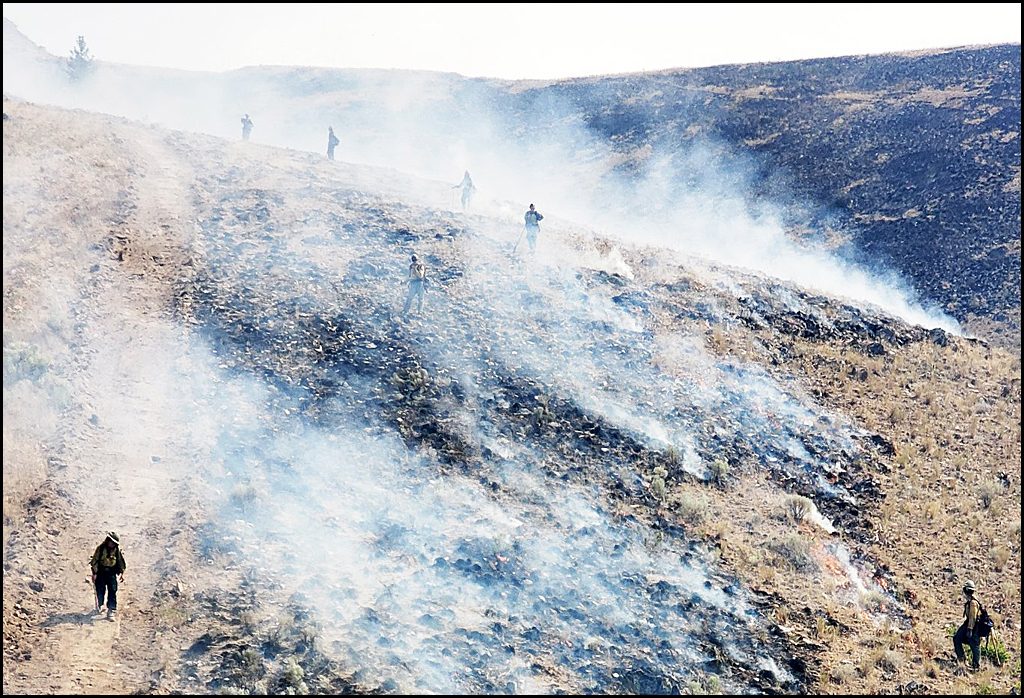 Firefighters work on establishing lines through burn back operations on the Williams Flats Fire. (Courtesy photo)

Over 900 firefighters battling the blaze…

With hot temperatures and low humidity, the Williams Flat Fire on the Colville Indian Reservation continues to burn and is a half mile from the east bank of the Columbia River. It has now grown to 34,000 acres and is 25 percent contained. Smoke from the fire continues to pour into Stevens County and the air quality in Chewelah Thursday morning was on the high end of the “moderate” scale and nearing unhealthy for sensitive groups. A red flag warming has been issued for Eastern Washington as winds and thunderstorms could start even more fires in the area.

Over 900 firefighting personnel are on the fire, including eight helicopters, 27 engines, 14 dozers and 23 water tenders. Challenges firefighters are facing include very high temperatures and low relative humidity; active fire behavior; reduced visibility; steep, rocky terrain and wildlife dangers in the form of snakes and bears.

EVACUATIONS
A Level 3 Evacuation Notice has been issued for areas south of Wilmont Creek to Whitestone Lookout Road are advised to leave now. All residents in the Wilmont Creek drainage are now in a Level 2 Evacuation Advisory – “Be prepared to leave in a moment’s notice”. Do not wait to be warned, leave if you see fire approaching your area. All residents and campers along the shoreline of Lake Roosevelt/The Columbia River from the Falls Creek/Cougar Canyon Road (the area sometimes called the Smoke Ranch) south to Wilmont Creek Road are now at a Level 1 Evacuation Advisory. This includes the Rogers Bar Campground. Level 1 means it’s time to start preparing in case the area needs to be evacuated.

Multiple roads are closed to public including: Kuehne, Nine Mile-Hellgate Road, Refrigerator Canyon, and Canteen Creek Roads. One residence remains under a Level 2 evacuation (Goat/Hellgate Ranch). Closures are in place to provide safety to the firefighters and the public, so please respect those closures.

A level one evacuation order is in place in the Fruitland area of Stevens County as a precaution. While some officials think the fire jumping the river is unlikely, they would like residents to be ready.

Lake Roosevelt’s Enterprise boat-in campground and Camp Na-Bor-Lee have been evacuated and closed to the public until further notice.

Helicopters are dipping and fire boss planes are scooping from nearby Lake Roosevelt for suppression efforts and need space to work. The public is asked to avoid these aircraft activity areas on the water.

NO DRONES
A Temporary Flight Restriction (TFR) of 10 miles surrounds the Williams Flats and Lundstrom Fires. The area is required for the large aircraft to safely manuever when dropping retardant. Please refer to the Notice to Airmen before flying near the area. Any drone (UAS) sighted within the TFR prevents aerial firefighting resources from providing support to the firefighters on the ground. Any person(s) identified flying a drone or UAS in a TFR could be subject to a $20,000 fine.