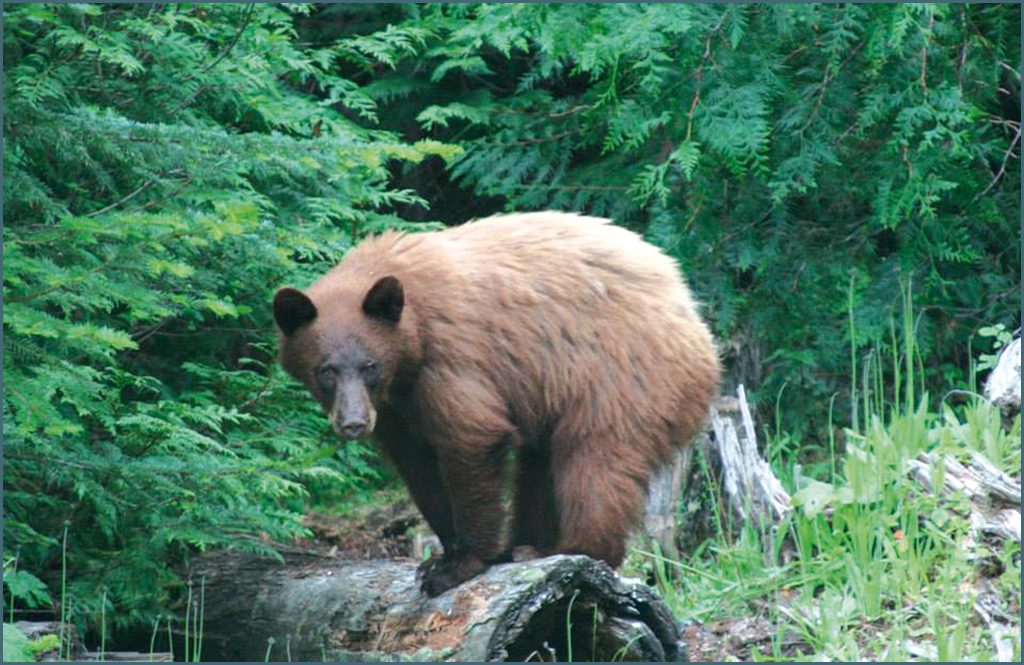 This cinnamon bear apparently knows it was time for its close up. (K.S. Brooks photo)

TEDDIES OF THE WOODS: Fresh out of hibernation, bears are a furry sight out in Stevens County…

The term “Teddy Bear” was named after U.S. President Teddy Roosevelt and if there’s anything as American as Roosevelt, it’s the bear.

With populations in the hundreds of thousands in North America, black bears are considered to be one of the least threatened predators around. While their bigger cousin, the grizzly bears is primarily in other areas of the country, they have been known to roam in “the Wedge” between the Kettle and Columbia River above Kettle Falls.

But chances are, if you see a bear out in the woods, it will be of the black bear varity. That’s not suprising as the animals are nature’s “Survivorman” as their generalist attitude towards what they eat and where they roam has allowed the species to survive in a variety of habitats through millions of years. 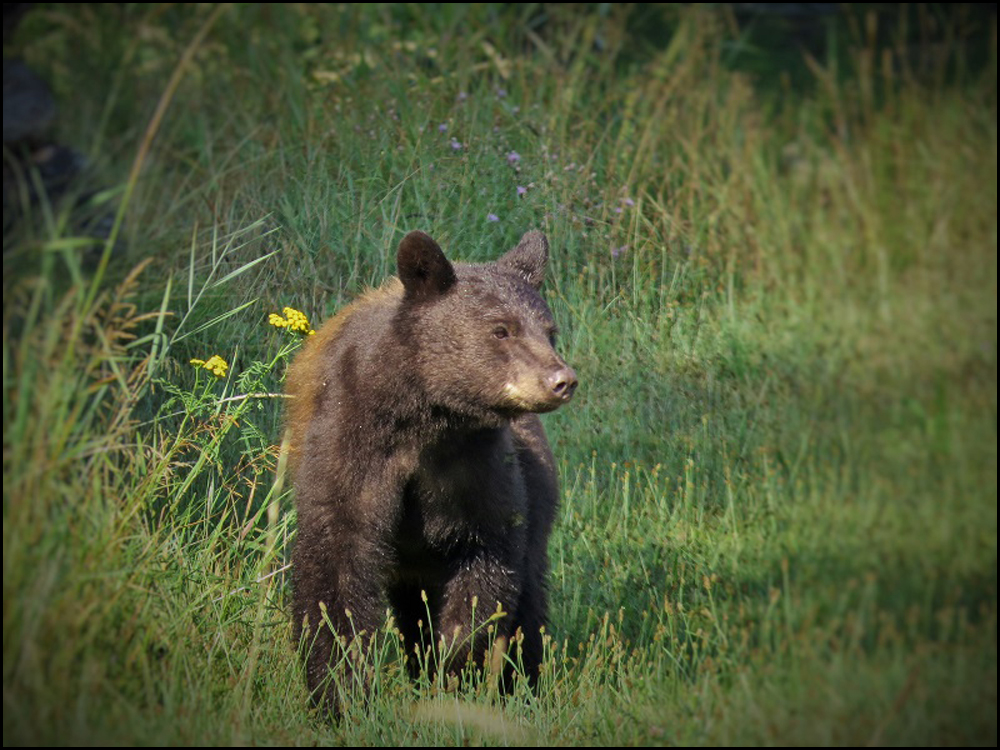 It was the black bear which got smaller over million of years (a trend that scaredy cat newspaper editors are thrilled many animals followed), and survived the last Ice Age thanks to its omnivore habits (eating both meat and plants), while other more specialized predators went extinct due to climate and vegetation changes.

Black bears can grow to 4.5 feet and weight from 90 to 660 pounds. Females are generally smaller and weight between 90 to 180 pounds. They have great physical strength and have been known to flip rocks weighing hundreds of pounds while also being able to run 25 to 30 miles per hour. They have good eyesight and see in color, unlike other mammals. They also have better hearing than us and a sense of smell seven times greater than a domestic dog. They’re bright, too, and are able to learn some tasks faster than chimpanzees. They can distinguish different shapes such as triangles, circles and squares. They’re also strong swimmers.

Black bears may be active any time of day but tend to be more nocturnal, especially if they live near human habitation.

And when it comes to sleep, or rather hibernation, black bears are extremely efficient, able to remain dormant for months without eating, drinking, urinating or defecating, which keeps their den scent-free, protecting them from predators. Despite this, they can still defend themselves should a predator visit the den. They den in Washington typically from mid-October into April. Dens can be small, sometimes just a little bigger than a garbage can, and include tree cavities, hollow logs, slash piles, small caves and areas beneath large roots, stumps, logs and rural buildings.

Black bears can start coming out of their den in March, but mostly in April depending on snow levels. Males and females without cubs come out first, followed by females with cubs. Due to delayed implantation in black bears, cubs are born in the den during the winter and emerge with the mother during the spring. Bears come out hungry, too, but they’re more inclined for a salad.

“They’ll start off by eating grasses and sedges, but will definitely get into bird seed and garbage if it is available,” WDFW biologist Annemarie Prince said. “We typically know when bears are emerging because we get a complaint from somebody that a bear got into their garbage or bird feeder.”

While black bears mostly eat vegetation, they’ll scavenge on winter kills and eat fawns and elk calves if they can, but after a few weeks fawns and calves can outrun a black bear, so they go back to eating mostly vegetation.

In the summer, bears add ants, bees, grubs and a wider variety of plants to their diet. Later in the summer and in fall, they change their diet to fruits, berries and nuts along with plants.

“Female black bears generally will not share their territory with other females, but the ranges of several males may overlap with hers,” Prince said.

Bears typically live about 18 years, though it is possible for some to live longer, with the record for a black bear in the wild being 39-years old and a captive black bear living to the ripe old age of 44 (no word on if it went through a mid-life crisis and bought a sports car).

One particularly cool thing about inland Washington black bears is they tend to only be 21 percent black, while 79 percent brown or blond. “Cinnamon bears” as they’re known can be seen around here.

Longevity tends to be good because they have few natural predators. In 2005, hunters took 1,333 in Washington which doesn’t seem like a lot when compared to the North American population of nearly 750K. Black bears tend to live in wooded areas which has allowed them to cohabitat with bigger bears like grizzlies, which tend to dominate more wide open areas.

Bears tend to avoid humans and fatal attacks are rare with an average of three per year in North America, despite the fact that their populations are widespread and numerous. The bear has a lower murder rate than humans: one in 250K bears could fatally attack someone, whereas one in 16K humans will commit murder.

Despite this, bears are wild animals, and people are urged never to travel alone and keep small children close when you’re out in remote wooded areas. Experts recommend carrying bear spray, and always being alert. If approached by a bear, you should stand up, wave you hands above your head and talk to the bear in a low voice. (Don’t use the word bear, because someone feeding a bear may have said “here bear” before.

Avoid direct eye contact as the bear could see this as a direct threat. Don’t throw anything at it, and safely move away from the bear while clapping your hands. If in a group, stand shoulder to shoulder. Never run from a bear unless safety such as a vehicle is very close by. Climbing trees isn’t recommended because black bears can climb trees better than you. It’s highly unlikely a bear will attack you, but if it does, fight aggressively.

Black bears are typically scavengers and want an easy meal, not one that fights back Most attacks occur because a bear has become used to humans because they either have found food near human habitation or been fed by humans (You’ve seen the sign, don’t feed the bears).

While grizzlies are much rarer in Washington, with small numbers in the Selkirk Mountains and the Wedge, they are bigger and can be more aggresive. While they tend to avoid humans as well, it’s best to just avoid conflict with bears instead of figuring out if it’s a grizzly or black bear.

Key steps to this include never feeding the bears – you can get fined for this – managing your garbage by making sure its in a bear-proof container or not putting it outside until right before garbage pickup, while also removing bird feeders, hummingbird feeders, feeding pets indoors, fencing beehives and harvesting fallen orchard fruit quickly. You should also put BBQ grills away after use. Bears acclimated to human habitation will continue to look around for easy meals and generally will have to be put down it they’re habituated.

If you have livestock, feed them indoors (in barns) and immediately bury any dead livestock carcasses, while also installing fencing around your livestock and beehives. Be aware because a bear might learn to feed on livestock food, then move on to certain livestock.

People seem to get a little more annoyed at bears when they rub up against scenic trees to mark the territory as opposed to numerous livestock depredations. They’ll typically rip strips of bark off trees with their teeth to reach the sap or insects inside. It may also rub its back against a tree as rubbing provides relief against an itchy winter coat. They’ve been known to make claw and teeth marks on these trees and some debate if its a sort of “territory marking.” Human structures like utility poles, footbridges and even outbuildings might serve as a scratching post or marking point as well.

All in all, bears are interesting creatures and they’re around in fairly large numbers. Typically scared of humans, if treated with respect and not fed (a fed bear is a dead bear), bears can be viewed as more of a part of NE Washington’s wildlife.