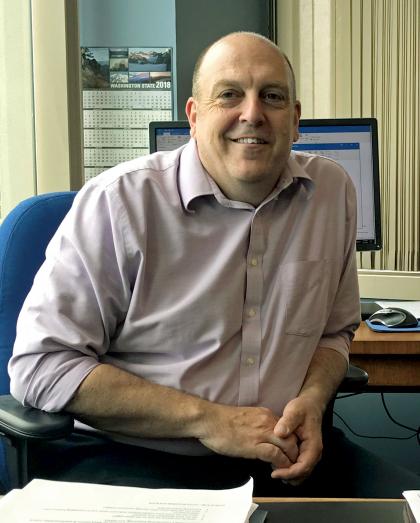 RE-LOOKING AT MANAGEMENT : Kelly Susewind talks with The Independent about wildlife management…

In a recent visit to NE Washington, WDFW Director Kelly Susewind met with Ferry and Stevens County Sheriff’s Offices to discus how wildlife management and law enforcement staffs can work together on predator issues in the area. Susewind has hit the ground running as director of the state’s wildlife management department. Several issues, including cougar management across the state, orca populations in decline and a predator issue in NE Washington has certainly turned up the public heat on the organization.

Susewind sat down with the Chewelah Independent for an interview last Thursday, ready to talk about issues concerning predators and populations of deer and elk. When asked about the uniqueness of Washington’s wildlife issues, the director pointed out the varied terrain and wildlife of the state and how is defines Washington.

“We have such a diversity of wildlife along with an international border, 29 treaty tribes the Puget Sound, a desert and an ocean,” Susewind said. “It creates some incredible challenges, and it defines what Washington is to me personally and that makes it great.”

COUGAR ENFORCEMENT
With recent cougar attacks on livestock in the Chewelah area, The Independent asked Susewind about how enforcement policies would be carried out with a problem cougar. He urged people to call if they are concerned about an animal, and WDFW will send an officer out.

Enforcement, however, is not black and white, and there is no blanket policy on what the officer will do. It can be a gray area and each situation can be different.

“The worst thing I could do is give a black and white directive,” Susewind said. “I feel the best person to make the call is the person in the field.”

Some local groups in Stevens County want either hounding or some sort of lethal response after a depredation by a cougar. Susewind said that officers make assessments and can decide to chase and harass cougars with hounds, but every situation is different. Overall it’s a judgement call by their trained officers.

Overall public safety is the focus of WDFW, Susewind said.

DEER AND ELK POPULATIONS
Susewind told The Independent that the agency is seeing a decrease in elk and deer populations along with a drop in harvest numbers. This has been a primary concern of local hunting groups, who have pushed for a four-point minimum on bucks in the upcoming hunting season.

WDFW is also halfway through a predator-prey study to see how individual predator populations interact with prey in the area.

WDFW has made a change in eliminating all antlerless harvests in the state and Susewind calls that the strongest first step they’ve taken.

“Some groups have communicated with me and I’m communicating back and we’re looking at where we want to land next year,” Susewind said.

This type of public input has also caused WDFW to accelerate the way they’re looking at bears and cougars. Susewind said they have proposals on increasing the bag limits on bears from one to two on the east side and also align the bear hunting season with the west’s season.

With cougars, Susewind said that when the Fish and Wildlife Commissioners’ meetings were held in Spokane, the response from local groups like the NE Wildlife Group based in Chewelah about predator population concerns were heard loud and clear.

“It was a day-and-a-half of strong testimony from people,” Susewind said. He also mentioned during the interview that cougar population levels are a concern they’re hearing across the state.

“We’re starting a public process now on do we want to change the way we’re managing cougars, are we doing it right or not?” he said. “We will start that process this summer so changes could be made in time for the 2020 hunting season. It’s because of those hearings we’re accelerating this process.”

WOLVES
Susewind called the wolf issue in NE Washington one of the most polarizing topics that he has dealt with. When it comes to the wolf recovery, he said that all signs show that populations are headed in the right direction.

“Their recovery trend is great and they’re doing exceptionally great in this area but we would like to see them do better in other areas,” Susewind said.

Still, he said he recognizes this isn’t great news for people who have to deal with cattle depredations and the affect they have. He said the department continues to look at non-lethal and lethal deterrants to handle this situations. Susewind said that with 27 packs in the state, only three wolf packs last year reached the criteria for lethal removal from the department.

Due to moves in the state legislature, Susewind said the department will look at translocating wolves in other areas to help with population disperal. Whether that will be an effective measure is still to be seen. Right now the bulk of the wolf population is located in NE Washington, although there are signs that the wolves are slowly starting to spreat to other parts of the state.

“Realistically, wolves moving to the other areas of the state will be a natural dispersal,” Susewind said. “It is what you would expect as an area gets saturated with as many packs as it can support and then they start to move out further.”

While wolf numbers are great in the Eastern Washington region and they’re starting to move to the North Cascades, the South Cascades have seen little wolf population growth.
Still, the growth has been such, Susewind said the department is starting to move into seeing what WDFW is going to do post-recovery.

“We’re going to get more aggressive on what we do post-delisting with the wolves,” Susewind said.

Other recent legislation passed has WDFW reviewing the status of wolves in the state to determine if they’re endangered or not. According to the wolf management plan, WDFW wants wolves in all sub areas of the state for a full recovery, but with increased looks at the population, that may not be necessary, he added.

Overall, Susewind asked for people to continue to report and communicate with the department when it comes to predator sightings, depredations and other issues concerning wildlife. This input goes into the decision-making process by WDFW.