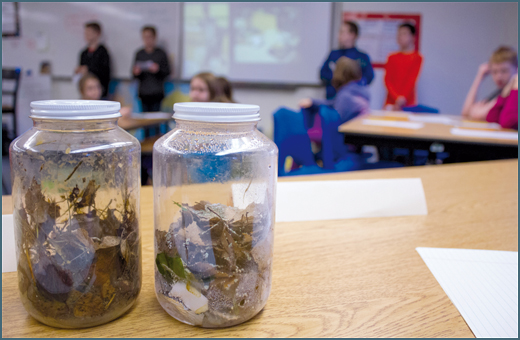 Presentation to community leaders in Chewelah…

It was the students doing the teaching two weeks ago. Candy Kristovich, a teacher at the Alternative Learning program, looked on as her students gave a presentation to community leaders in Chewelah on the problem of food waste and how it relates to climate change.

When asked how this investigation came about, Kristovich stated that she has been working with Mike Napean from Pacific Education Institute (PEI) and Dana Bowers from the Stevens Co. Conservation District for a couple years to create engaging FieldSTEM experiences for her students. Kristovich was invited by PEI to work with other educators across the state on the Locally Relevant 3-D Climate Science for Drawdown grant, to design performance tasks aligned to NGSS climate science expectations and then implement them in the classroom. As part of a program that partners teachers and schools with organizations like drawdown.org, kids are looking at real-world problems and coming up with solutions for the future.

Chewelah Alternative School students talked about the problem of food waste with community members. (Brandon Hansen photo)
The essential question for their performance task was, ‘What effect does food waste have on climate change?’ As the students researched, they were very surprised at their findings.

Students then wanted to know ‘what is our food waste footprint in the school?’ They conducted a food audit and were able to determine the value of that loss in dollars ($500 for one lunch district-wide) , not including the value of lost natural resources.

Through research, students learned that food waste has a high impact on climate change and global warming because of the toxic amount of methane gas it produces.

This problem is largely man-made. However, because it is largely man-made, we have a lot of control for change. Kristovich’s students, who have already gotten attention from the state, sat down with CJ Simpson from the Chewelah Casino, Melissa Tindall from Safeway, Chewelah School Board member Judy Bean and Chewelah City Administrator Mike Frizzell to share their learning and then discuss what could be done locally.

In their presentation, students pointed out that 20 tons of food is wasted in the country every ten seconds. One-third of produce from a farm never makes it to the plate. Despite all this, they pointed out that one in seven Americans is food insecure.

Unused and thrown away food usually ends up in landfills like the one up in Kettle Falls. Chewelah students pointed out that food is the biggest contributor to landfills, pound for pound, and over half of that food waste comes from homes, not restaurants.

Unlike composting, food in landfills does not decompose because there is no oxygen.

Instead, it creates methane gas which has a global warming capacity of 25-30x higher than carbon dioxide. A landfill can emit methane gas for up to 30 years. Instead of letting the methane gas go into the atmosphere, it can be harvested and converted to energy but it costs 1.2 million dollars to set up so most towns can’t do this. Landfills are the third largest source of methane gas and contribute 124 million tons of GHGs every year to climate change.

In fact, Highline hill near Chewelah is actually the town’s old landfill. The students showcased two jars, one that had air and was composting naturally while the other was without oxygen and breaking down much slower. Students suggested that people have their own compost pile, eat more plants and make food portions smaller.

When asked for their input, members of the community pointed out some things they do to limit food waste.

While the City of Chewelah has one garbage truck and delivers the garbage to the Kettle Falls landfill, they do offer a recycle center in town for things like plastic (not plastic bags), tin and aluminium. They also have a town compost pile for yard waste only.

“In some areas like Seattle you get fined if you throw food in the trash; food waste is to be deposited in a separate receptacle,” Frizzell pointed out.

Frizzell said that at landfills, a pile of trash can actually be hot from the garbage and gas and in some instances even smokes. The city does make money by recycling aluminium cans and tin soup cans, while plastic costs money to recycle and it’s a break-even proposition when it comes to paper. The city does not take glass.

Safeway’s Melissa Tindall said that Safeway has large divert bins where they can dispose of unused produce, plastics and other materials. In this way, they’re able to donate, recycle, sell and process these items as opposed to just throwing them away. Unsold but perfectly fine produce and food is donated to the Chewelah, Addy, and Valley food banks as well.

“It costs a lot less diverting the items then putting it in a landfill,” Tindall said.

Wilson, of the Chewelah Casino said that they have gotten creative with how they use menu items and buffet items. If something goes unsold in the buffet, it can be used in another menu item. The biggest issue they have is people simply throwing away their food after not eating it.

“We end up with very little food waste except for the food that people themselves throw away,” Wilson said.

Money is also a big driver for restaurants as wasting large amounts of food would not be cost effective, so a big part of Wilson’s job is ordering the correct amount of food and making sure they don’t waste a lot of it.

Students broke out with each community member for individual sessions so they could come up with more solutions such as strategies to educate others on how to lower food waste and what to do with it.

Both Frizzell and Bean expressed interest in having the students speak in front of the city council and the school board.

What began as an investigation that was to take four class periods snowballed into a long-term project because the more the students learned, the more inquiries they had. The more questions they asked, the more people outside of school became interested; Trevor Pope from Colville asked if he could share with the class about landfills and methane gas harvesting; Melody Wynne of the Spokane Tribe shared an indigenous perspective; partnering with PEI and Dana from the SCCD has been invaluable. The class was one of five across the state chosen to present their investigation at the North American Association of Environmental Education; The students have also been invited to present their learning to Governor Inslee at the next legislative session in February.

Kristovich stated, “I am especially thankful that our community leaders are genuinely interested in collaborating with students! The students are continuing with a plan to educate people on how to lower food waste at home, school and community and to make our world a better place to live. What a great learning opportunity for our kids and a chance to be world changers; another example of why Chewelah is a great place to live!”