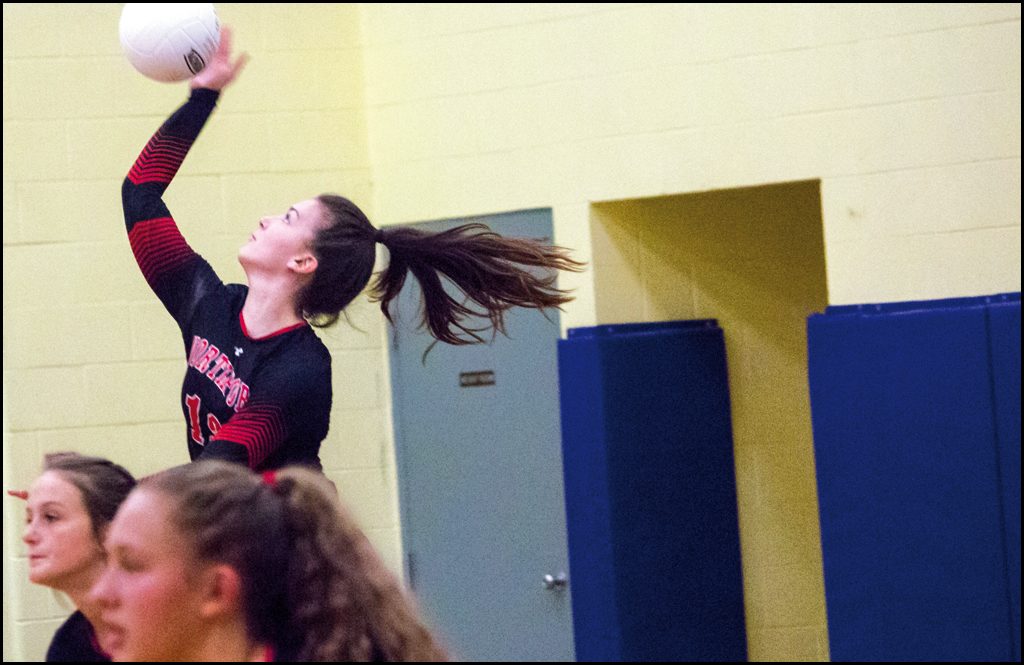 BEASTS OF THE BORDER: Northport wins two league games to garner in good position for middle of the season…

Northport is looking like the toast of Stevens County in the 1Bs, after starting out of the gate 4-0 overall and 3-0 in league.

“It is definitely nice to start the season 4-0,” Northport Coach Shy Wilson said. “The girls keep improving and gaining confidence.”

Brianna Young had 16 assists and eight blocks in the matchup, while Kylie Cochran led Northport with 12 kills. Curlew dropped to 2-1 on the season with the loss, despite being led by Erikah Lindgren’s 12 kills.

On Saturday, the Mustangs traveled to Hunters where they faced a short-handed Lions team and came away with a 25-14, 25-12, 25-10 victory. Kylie Cochran had seven assists and nine aces for

Northport in the matchup, while Megan Erspamer and Lexi Nelson each had a pair of aces for Hunters.

“We have a really tough schedule over the next two weeks when Odessa, Selkirk, ACH, and Valley come play us at home,” Northport’s Wilson said. “We are just hoping to stay competitive and play to the best of our ability”


SELKIRK NOW 3-1 ON THE YEAR
With two wins over Inchelium and Harrington, Selkirk again looks like a strong power in the 1Bs this year. The Lady Rangers downed Inchelium 25-20, 25-13, 25-13 on Thursday, Sept. 19, led by Bree Dawson’s 12 kills, while Rylee Desautel led the Hornets with seven kills, four blocks and three digs.

Colville fell to 3-2 on the year despite eight kills from Molly Schauls, five blocks by McKenna Reggear, four aces from Kiley Power and 12 digs from Katelyn Lewis.

Power also had 26 assists in the matchup for the Indians.

Brooke Stutzer led the way with 19 kills, while Power had 30 assists and 17 digs.

“We came out of the Deer Park game with a list of things to work on, but at the same time I was proud of the team for battling until the end,” Colville Coach Jacque Bassett said. “Against Riverside we just made too many unforced errors that allowed them to go on some runs against us.”

Colville will host Medical Lake on Thursday at 6:30 p.m.

“This week we are going to focus on maintaining a faster pace of game,” Bassett said. “We need to be aggressive with our serving and offense, while being mindful of unforced errors at critical points of the game.”

Jocelyn Glover had nine digs for the Lady Bulldogs, while Alana McDaneld had five blocks. Kathryn Lawrence led the team with four kills

Kettle Falls will play Davenport on Thursday at 6:30 p.m.