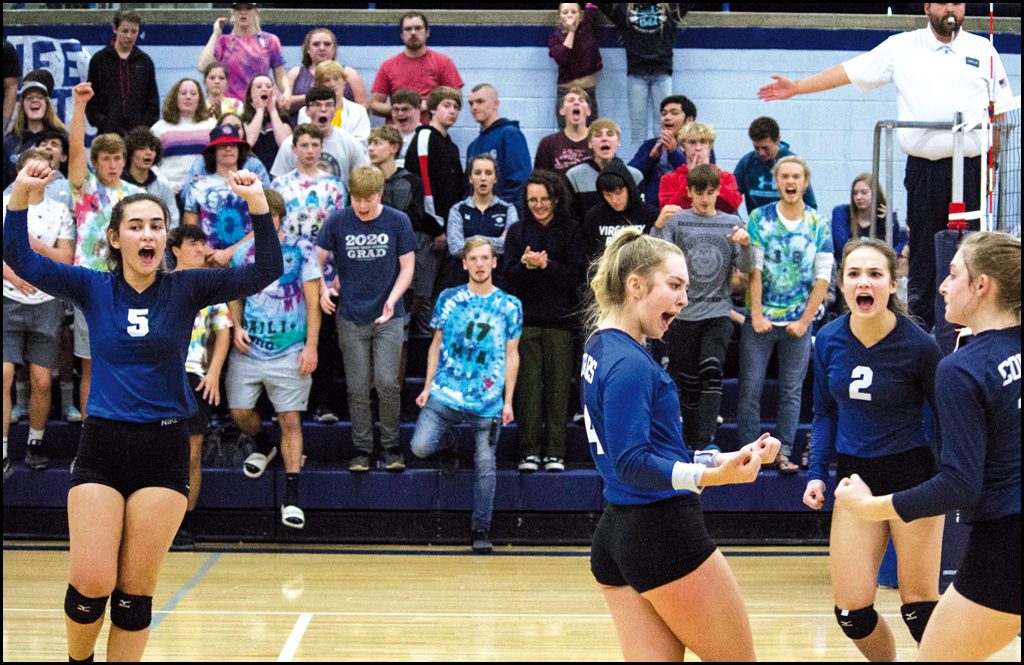 The Chewelah Cougars have plenty to be happy about as their offense gets into gear and league play heads down the stretch. (Brandon Hansen photo)

Somebody needs to check the bottoms of Lily Kirry’s shoes. No five-foot five high school girl is supposed to jump that high or reach that far above the net. Yes, she is a three-time state hurdles champion, but there has got to be something on the soles of her sneakers that gives her that ultra-spring.

Has “flubber” become a reality, or is it all crammed in this young lady’s gnome? Kirry clobbered a career-high 19 kills on Thursday night to lead the Lady Cougars to a three-set sweep over the visiting Wilbur-Creston Wildcats. The senior outside hitter had an overall outstanding match with 11 digs, five serving aces and a block as Chewelah won the league encounter with scores of 25-22, 25-19 and 25-6.

However, like the rest of her teammates, she is anxious for Fitzgerald’s return to the team, hopefully this week.

“We definitely miss Alyssa, especially her blocking ability in the middle, but the team has adjusted well,” said Coach Kaya Landers. “Lily Kirry has had to carry more of an offensive load with Alyssa out, and she continues to sharpen her skills as we have tweaked some technique things for her. It’s impressive to see a well skilled senior who is still hungry to improve! Natalie George and Laynie Haskell have both taken turns stepping in to the middle blocker position which then changes things on our right side. Also, Mia Bellevue has demonstrated some offensive ability from the right, so it’s fun to see everyone working and stepping up!”

Passing was definitely the highlight of the match on the Cougar side of the net. Wildcat serves were sent to setter Elle Carpenter, who dished out 29 assists to front row hitters who hammered 36 kills in just three sets. Chewelah’s defensive performance included 52 digs, led by Carpenter and Kirry with 11 each.

Wilbur-Creston did lob a few dink shots over the front row early in the match, but adjustments by Coach Kaya Landers.

“There was a lot of offense in that match,” said Kirry. “We practiced a lot of diversified offense this week, and I was glad we got the chance to show it off. I am so excited that we had so many great passes so I could get as many kills as I did.

“Our squad is really strong. We have deep emotional connections with each other and lots of strong friendships, and I think you can see that on the court. There is a lot of good communication between us on the floor, which affects our offense and our defense. That’s going to make us stronger as the season goes on.”

As Kirry said, it took the Lady Cougars a while to shift into high gear. They trailed the visiting Wildcats through most of the opening set, sometimes by as many as four points, with neither team exhibiting a lot of offense. Kills by Maili Masuda, Natalie George and Kirry kept the score close.

Chewelah was still behind 18-14 on the back side of the set. That is when the Cougars went on the offensive. Three consecutive kills by Kirry, two by Haven Rainer and another from George knotted the score at 20-20. The score was tied two more times before Kirry turned a block into a kill and then ended the set with a final kill for a 25-22 win.

The second and third sets were quite the opposite as Chewelah raced out to an early lead and never looked back. The Cougars rallied behind Kirry and Rainer to take a 12-7 lead. Kirry had five kills and a pair of ace serves and Rainer added a couple of kills. Then, the rest of the front row went into action with Elle Carpenter setting one kill after another to George, Kirry and Laynie Haskell. Back row play from Jessi Macrae, Taya Tapia, Miranda Harris, Mia Bellevue and Masuda kept Carpenter on task. Carpenter also contributed a kill and an ace as Chewelah fought off a late rally by the Wildcats to notch the 25-19 triumph.

The final set was a runaway for the Cougars, who hammered their way to a 12-1 lead and continued to spread the score for the 25-6 win. Chewelah had found its rhythm and it was ‘pedal to the metal’ on the home side of the net. Kills by Kirry, a pair of ace serves from Belleview, and a dink shot over the Wildcat front row by Carpenter gave the Cougars the 11-point split. Kills from Erica Tindal, Rainer, and Haskell continued to widen the gap. Wilbur-Creston set Kirry for the final smash of the set as Chewelah swept the Wildcats in three straight sets.

This week is Homecoming Week at Jenkins High School, but the Cougar volleyball team will not be staying home. The Cougars traveled to Kettle Falls on Tuesday. They will drive to Davenport on Thursday and go back on the road to Northwest Christian the following Tuesday. Their next home match will be on Thursday, October 17, when they host St. George’s.

“It’s going to be a challenging match at Northwest Christian next week. They are playing at a very high caliber right now. We will continue to work on our defensive strategy to match up better against some of their strong hitters. After playing Kettle Falls this week, we will have been through the first round of league play. We definitely don’t want to underestimate anyone but I feel like we can continue to develop players in different positions as we finish out league play in order to find our best line up for playoffs.