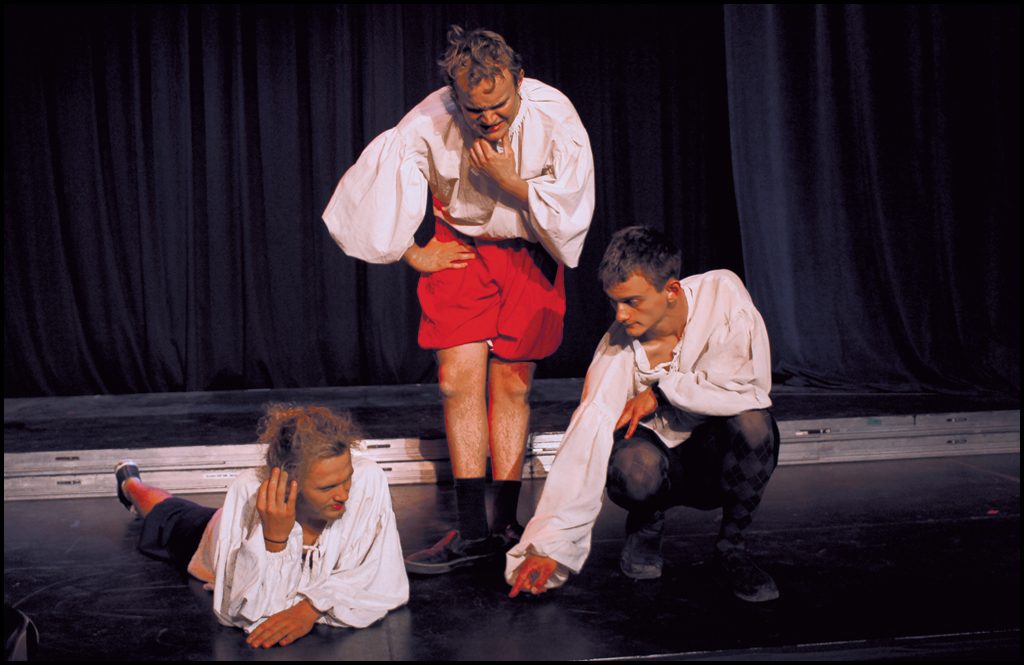 Robbie Thompson, Noah Thompson and Judah Katona will attempt to perform all the works of Shakespeare, with some shortcuts, of course. While a small cast, it should be an enjoyable 97 minutes. (Courtesy photo)

BRING ON THE BARD: The Complete Works of William Shakespeare (Abridged) (Revised) will have you rolling…

For those of us who don’t have time to brush up on our Shakespeare, thank goodness for people like Robbie Thompson, Judah Katona, Noah Thompson and Katrina Rumage. The four-person crew is putting on “The Complete Works of William Shakespeare (Abridged) (Revised) this weekend.

This 97-minute play will include basically all the bard’s works, performed by the two Thompsons and Katona. Rumage served as the stage manager for this show, keeping everyone in line and on task for the challenging show.

“The show is so simple but hilarious,” Director Robbie Thompson said. “There is a lot of ad-libbing and improv and doesn’t need specific props or a large cast.”

The lack of a big cast means all the actors have to wear a lot of hats. While changing roles constantly in the show, Robbie also had direct, while also acting on stage.

“Throughout rehearsal, it is difficult to understand how it looks for the audience while I am on stage,” Thompson said. “What people should expect is adult themes, without strong language. A loving, but all too honest interpretation of Shakespeare’s work.”

The show is on Nov. 14-16 at the Chewelah Center for the Arts, is produced by the Park Avenue Players. The show premieres this Thursday at 7 p.m., will play on Friday at 7 p.m. and then a 2 p.m. and 7 p.m. showing on Sunday. Tickets in advance $10 and $12 at the door. Tickets are available online at our.show/chewelah/shakespeare or at local stores.
Robbie Thompson is fresh off directing the Stagetime Production “Singing in the Rain,” and will be attending college in the near future. He wants to continue in the performing arts and is directing shows to hone his craft.

Thompson said he is an 80-year-old trapped in an 18-year-old’s body with the emotional maturity of a five-year old “and the vivacity of a much uglier Elon Musk.” Robbie has been a part of theatre for seven years, after joining it because he wanted to start hitting people with swords.

He wanted to note that people shouldn’t blame him for any offensive material covered in the show, and should instead blame Shakespeare.

“I mean, he wrote it, for crying in the bucket!” Thompson said. “If this doesn’t work, there is a stress pillow backstage which won’t be provided due to personal reasons.”

Thompson also enjoys chess, reading philosophy and commenting on other people’s problems. He intends on finishing his associate of arts degree and then a Bachelor’s of Fine Arts at a major university.

Judah Katona is also in the show, and Thompson calls him the third reincarnation of Gene Wilder.

“Judah’s glowing mane of golden hair has been an icon of local theatre,” Robbie said. “Because of Judah’s activism in the arts, he has had the opportunity to play a plethora of roles in various productions. He has played kings, princes, London bankers and a very, very old man all in the span of a few years.”

Thompson said Judah now hopes to play all those roles in the span of 97 minutes in this show.

“Judah hopes to become a lifeguard on the coast…or Godzilla…or a homeless man…whichever comes first, so probably Godzilla. Judah also politely asks that you subscribe to pewdiepie,” Thompson said.

Robbie’s Brother Noah is in the show, and Thompson has listed his brother’s hobbies as sketching, reading non-fiction books published before 1990, poetry, martial arts and searching for the greatest question to the answer of life, the Universe and everything.

Robbie said Noah made the cast because he memorized the poem “The Rhyme of the Ancient Mariner.”

Noah is currently enrolled at EWU, where he studies Computer Science and expects to graduate in the Spring of 2021.

“Or be kicked out by then,” Robbie said.

Then there is the person that did the most work on the show, keeping everybody together. Katrina Rumage has been in Chewelah for one year and has decided to celebrate that by jumping into the local theatre scene for her favorite playwright.

Rumage graduated from Luther College in 2013 with a degree in English.

“Her hobbies include growing a new human (she’s pregnant), taking pictures of her dogs and crafting,” Robbie said. “She is grateful to her husband Seth for his support and keeping her up-to-date on the Packers score when she was at rehearsals.”

With a small cast, there was still the issue of getting rehearsal time since everyone had vastly different school schedules.

“As for schedules, it is and was a 100 foot tightrope embedded with razors,” Robbie said. “Very difficult. However, it is possible. Therefore, we did it.”

So if you head over to the show at the Chewelah Center for the Arts, please be prepared for some improv, some off the cuff things, and much much more!