‘Troubling that we are having this debate’: Inslee doubles down on mask mandate 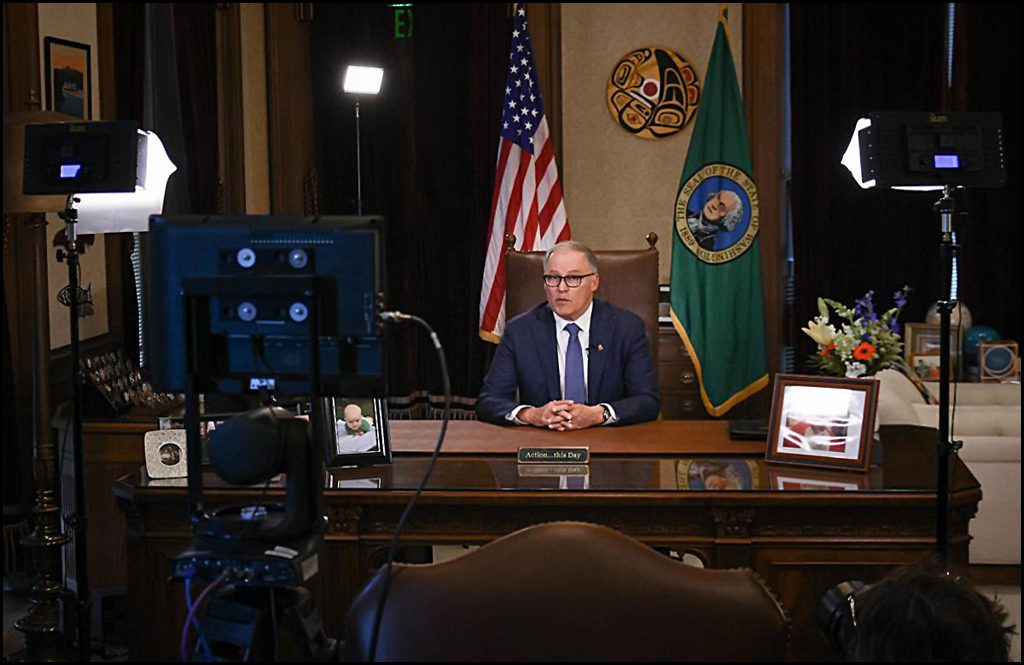 Gov. Jay Inslee has continued his plea for Washingtonians to adhere to a recently-enacted facial covering mandate for those in public, speaking in the Tri Cities area and offering numerous calls to “mask up” in the state.

Inslee spoke at Columbia Basin College in Pasco Tuesday, June 30, in part to talk about the Tri-Cities’ current challenges with COVID-19. The governor was met with vocal pushback in what was initially an outdoor event, though calls of protest against the shutdown of businesses in the area eventually led to him taking the press conference inside with invited members of the media.
Upon restarting the press conference indoors, Inslee spoke specifically about issues faced in Benton and Franklin counties — a region with two-thirds the population of Clark County but about four times the total COVID-19 cases, based on 2019 population estimates and local health department statistics.
More generally he spoke about protests statewide over the mask mandate, which made wearing a facial covering in public the law beginning June 26.

“It should be troubling that we are having this debate,” Inslee said. “There is no debate in the scientific community about the fact that masks work.”
He referred to support for mask-wearing from director of the National Institute of Allergy and Infectious Diseases Anthony Fauci and White House Coronavirus Response Coordinator Deborah Birx, pushing back on the notion that apparent increases in cases seen in Washington and nationwide was due to a greater prevalence of testing, something he said was “just not true.”
“Virtually every medical person who has evaluated this … have concluded that this virus is growing in our country,” Inslee said. He said one of the reasons there was an increase in new cases was individuals believing that the pandemic was over.
In terms of enforcement of the mandate, the governor pointed to “very large-scale adherence to the law” for past mandates regarding business operation as signs that taking legal action would not be necessary for compliance.
“It is a misdemeanor, but we shouldn’t have to go that route,” Inslee said. The governor said there was consideration about obligating businesses not to serve those who were not wearing masks, similar to what has been imposed in Yakima County.
Acknowledging that Benton and Franklin counties are still in Phase 1, Inslee pointed to mask use as allowing for those jurisdictions to open up “as soon as humanly possible.”
“Mask up so we can open up,” Inslee remarked.
The governor acknowledged that should outbreaks worsen in places there was the possibility of reverting counties in further phases of “Safe Start Washington” back to more restrictions, saying, “we don’t want to think about that, we like to plan on success, but it is a reality.”
During the indoor conference, Inslee did acknowledge what led to a change of venue, though he pointed to elected officials, some of whom he encountered earlier that day, were in support of mask mandates.
“I know that there are some voices, some of which you heard today,” Inslee noted, referencing those who heckled his speech outside, “but no one voted for those people out in the courtyard today.”
Inslee said that the protests weren’t surprising, noting that “you never get 100 percent of anything.” He appealed to community-minded sensibilities of individuals who felt that the personal risks of them not wearing masks was worth it.
“When I wear a mask, it’s to protect you. When you wear a mask, that’s to protect me,” Inslee said.
Inslee pointed to a message from U.S. Rep. Liz Cheney, who posted a photo of her father, former vice president Dick Cheney, wearing a facemask with the hashtag # realmenwearmasks, with the governor noting the elder Cheney was someone “who I disagreed with on virtually everything” during their political careers.
“You might be the most macho, risk-taking person who doesn’t care about their own health in America, but if you do care about the rest of your community, then it really helps to wear a mask,” Inslee said.