Watching his daughter Lily compete for her third state title, Clint Kirry observed her hit the fifth hurdle during the 100-meter hurdles.

“She got knocked off her steps, straightened back out and accelerated through the field to win and to give me a heart attack,” Kirry said.

Medical emergencies aside, the Cougars Lily Kirry has become one of the best, if not the best athlete in Chewelah’s track and field history. She won the 100-meter hurdles with a time of 15.72 which was ahead of second place Willipa Valley’s Brooke Friese’s 16.08. That was one of two state titles she won that day and the fourth of her career.

“It definitely was a shock when I hit that hurdle,” Lily Kirry said. “I have never had a race were I have hit a hurdle that hard before. After I hit the hurdle, I realized that something as small as hitting one hurdle could lose the race for me. Then, I gave it my all. I went hard to recover my steps and to fix my form over the hurdle.”

However success met some adversity in the 300-meter hurdles as Lily Kirry placed second with a time of 44.96 just behind Davenport’s Darby Soliday in a photo finish. Soliday set a PR of 44.88.

“The actual race itself was pretty smooth but, running next to the grand stands makes it hard to hear the other racers around me,” Kirry said. “So, once I finaly realized that Darbey from Davenport was next to me, it was to late. I’m not sad about a second place medal, though. Darbey and I have become friends since we have raced each other all season. She is amazing and works so hard, and I am so proud of her.”

But she took that small set back into the next race and won her fourth state championship as a Cougar. Kirry won the 200-meter run with a time of 25.67 which was nearly a half-second better than Reardan’s Ayden Krupke.

“My 200 was fueled by total adrenaline,” Kirry said. “I had just run my 300 hurdles, and had to wait for a podium photo. But I eventually had to skip the podium photo and run over to the 200. I was in the ‘Go! Go! Go!’ mind-set, which I think helped my performance. After just barely losing the 300, I was not going to let that happen again. I ran probably the hardest I ever have in that race, so I didn’t even have to worry about the other racers.”

“Four state titles is so crazy to think about,” Kirry said. “When I was younger, I never would have guessed that I could have that much success in something. Being a junior, I am so proud of myself of what I have accomplished in three years, but I still want to keep growing and achieve more.”

“It’s very tough to win one state medal,” Chewelah track and field coach Whit Baker said. “As an athlete you have to have a tremendous work habits and ethics. You have to have a bit of athleticism with great heart and desire to put it out there every time are the good ones with a bit more success.”

Kirry has competed with the best athletes in the nation when it comes to the hurdles and she will be doing it again next weekend for the state combined track and field meet on the west side.

“All athletes want to win, but those with killer instincts seem to do better,” Baker said. “It also helps to keep working for that perfect practice. Not many have achieved what Lilly has done this year.”

Coach Shirley Baker said that Kirry is a very talented athlete, naturally quick and agile along with her work ethic.

“These traits make her a likely candidate for multiple state championships,” Baker added saying that the state combined events championship at Lake Stevens this weekend will show the breadth of her talent and just good she is state and nation-wide.

Lily wasn’t, however, the only Cougar to make the state track meet. Chewelah sent 16 athletes after years of sending just a few or maybe one athlete to state.

“The allocations make a difference for us,” Shirley Baker said. “We could have one of the top five athletes in the state but not make it to the championship meet because two or three  of those five were in our district. Our athletes are always competitive in our classification. We have a lot of success at the state level because of the athleticism inherent in our student body.”

Whit Baker said that Chewelah’s track team had a positive track season with athletes getting several PR’s every meet.

“The biggest experience was that all the athletes liked each other and supported each other, no matter the amount of success,” Whit said.

Her success wasn’t even limited to track and field on Saturday. After winning two state titles, Kirry changed, got dinner from a Maverick’s gas station and rode the Chewelah Community Float to the Grand Moonlight award at Moses Lake Spring Festival Grand Moonlight Parade. Early this year Kirry was named Chewelah’s DYW.

“I did have to rush to the Moses Lake Parade after I completed my races,” Kirry said. “Actually, I did the same thing after the district meet. I had to rush to the Lilac Parade.”

CHEWELAH HAS MANY PLACERS IN THE THROWS
Chewelah’s version of the three amigos continued to do well in the throws. In the discus, Natalie Rose-Sheppard placed third with a PR of 109-1, followed by Haven Rainer in sixth with a throw of 102-2, also a PR. In 10th place was Milayna Hartill who notched a throw of 94-07.

“Looking forward, we graduate three males, but our entire female squad returns next year, and a good number of them are freshman,” Shirley Baker said. “With the leadership of our class of 2020, Chewelah track fans will have a lot to look forward to for next season and beyond.”

The girls 4×100 relay team was hoping for a top three finish but it wasn’t meant to be in 2019. The Cougars do have everyone coming back in 2020 plus some competitive sprinters up from the junior high programs that should help the 4×100 team.

“Wade has spent time last summer and many many trips to Rathdrum to work in the 1620 year round throwing facility,” Whit Baker said. “He switched from the glide to the spin at the end of his sophomore season and had to learn a complete new method. Some techniques carried over from the discus. He also just kept growing.  There are things like the size of the rings not being equal. Being in the weight room year round is a big bonus and that has helped a lot with his throws. He has worked hard and diligently all season.”

Baker had wanted to hit 50′ for the shotput and 150′ for the discus but an early season deluge of snow meant that track and field started late. He will now make the transition to the 16-pound shot put and the two kilo discus was the start of his college career.

“He has access to some of the most experienced coaches in the country and we will utilize their expertise in preparing Wade for the next level,” Baker said.

Kaden Krouse placed ninth in the shot put at state with a throw of 41-9.

Lake Roosevelt Steven Flowers won the shot put with a throw of 51-8.75, while Rainier’s Jeremiah Nubbe placed first with a mark of 147-01.

Chewelah’s 4×400 relay placed 13th at the state championships and set a PR of 3:39.58 with the running of Wyatt Collins, Kaden Krouse, Judah Katona and Ethan Rowe.

“The boys 4×4 PRd at State, which is an amazing feat,” Shirley Baker said. “Again, we have some quick athletes moving from 8th to 9th grade next year which will fill the gap left by Ethan Rowe’s graduation and challenge our current legs.  The future looks bright for Chewelah’s relays.”

“The boys 4×400 just kept getting better and learned how to better manipulate the handoff exchange zone and all its cahows,” Whit Baker said. 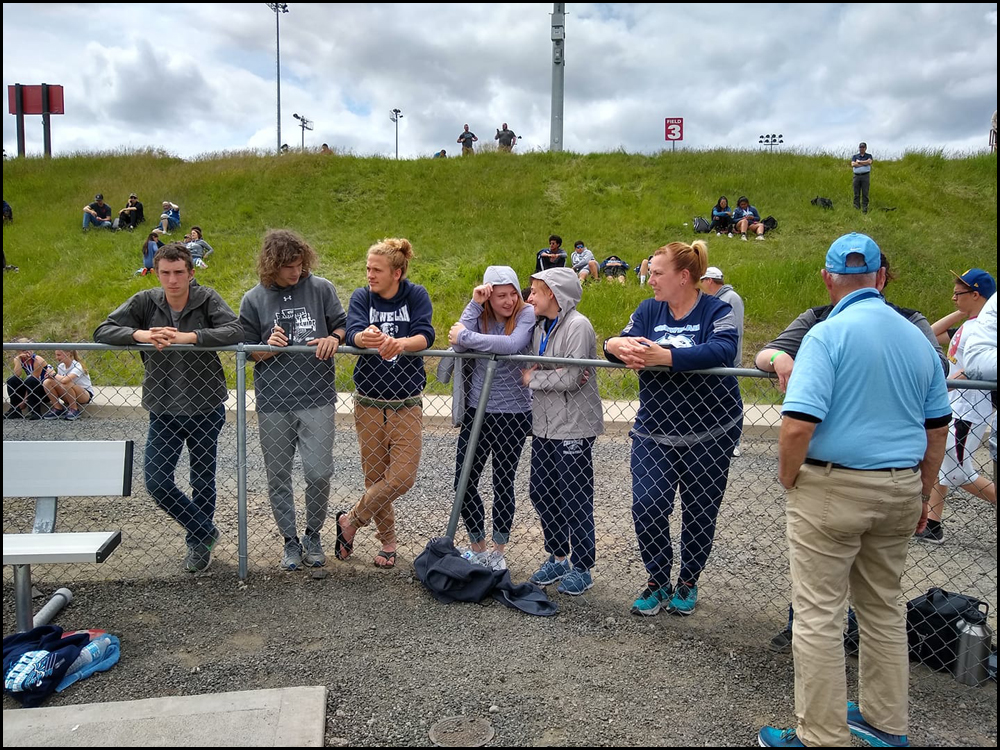 KETTLE FALLS BOYS
Kettle Falls Senior Charlie Andrews placed second in the high jump with a mark of 6-2.
Kettle Falls’ Easton Pomrankey finished fifth in the 800-meter run with a time of 2:01.90.

KETTLE FALLS GIRLS
Kettle Falls freshman Mya Edwards set a PR in the 3,200 meter run and placed sixth in her first trip to the state tournament with a time of 12:08.53. In the javelin, junior May Sauvola placed 10th with a mark of 97-08.