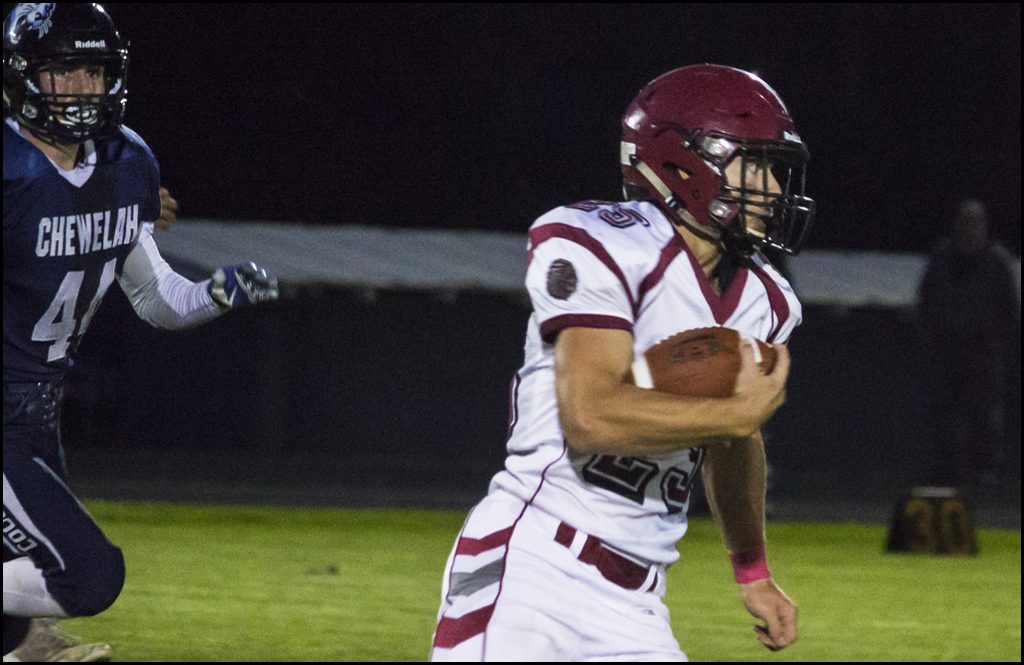 Grant Michaliszyn will be running for a bunch of yards at a football field near you. (Brandon Hansen photo)

Watching Grant Michaliszyn run the football for the Colville Indians, you would assume he is a hard-nosed kid that drives a Ford Ranger to school. Maybe does a little hunting on the side, and perhaps helps with the occasional farm job. First hits rarely bring him down and he can be seen carrying a group of would-be tacklers. When asked what he drives, however, is isn’t a Ford Ranger by something ten times more grittier.

“I drive a 1999 Chevy Silverado,” the senior Colville running back says.

Now that’s grit. We’re not sure what is more Stevens County, the fact that Grant in a pass-first era of football has carved out his place as one of the most prominent running backs and linebackers in the state, or the fact that he drives a pickup older than everyone going to school in Colville.

Michaliszyn began playing organized football when he lived in Kennewick at age six. He was naturally fast so the position fit him well. Flash forward to his senior year, Michaliszyn is an all-state linebacker and an all-league running back. Colville has a crowded backfield and that has been the case for several years. Michaliszyn has been able to stand out on the 2018 State 1A Championship Colville Indians with 682 yards and 12 touchdowns even with senior back Jacob Larson getting 61 more carries than him. As a junior, he turned heads even though no one could pronounce his last name.


“The last name question, haha, the best way to put it is (Michael-is-in) like Michael is in the house,” Grant said. “We used to make a joke when Michael Fitzsimmons played”

Names aside, this year he has already been the most reliable ballcarrier for the Indians and is coming off last week’s 188 rushing yards and three touchdown performance in Chewelah.

“The start of the season for me personally is going great, I’m keeping positives yards and finding a way to push forward even when I’m piled up,” Michaliszyn said. “I have always embraced the role as a leader and I’ll do whatever it takes to help the team even if that means running the ball over and over again. As a senior and a leader on the team, I do my best to keep the team engaged and on track for success.”

Colville has begun the season 2-1, with the lone blemish coming against 2A Cheney. Ask the Indians with their high standards and they will tell you they have a lot of improving to do. The thing is, generally Colville plays their best ball by the end of the season. Last year the Indians began the year 0-2 and then went on to win a state championship.

“We are always trying to improve something,” Grant said. “There is never a point of satisfaction for us.”

And it’s extra important to Michaliszyn, who is a senior this year and is running on his last chance out on the prep football field. The senior year can be emotional for some players, and when you consider how close knit the Indians are, that’s no surprise.

“I have nothing but love for these guys and It’s been an honor to play for such an amazing coaching staff,” Grant said. “With my senior year in mind it fuels my confidence and effort to make this the best season I can and anyone in my way will hit the dirt. The most fun part about playing for Colville would have to be spending time with my teammates, on the bus, in practice and outside of sports. We are family and we all bring a good energy wherever we go and we make sure everyone is having a good time.”

Michaliszyn has been able to get a good chunk of carries and handle the punishment that those carries can dish out. Anyone who has been a feature back can agree that even while football players are young, hits can add up on a running back but Michaliszyn is taking them in stride.

“Taking a lot of hits is just a part of the job and the best way I deal with it would be hitting harder than the person hitting me,” Grant said. “The day after a game I do feel the bumps and bruises, but my main focus is to always keeping my self busy, the only time my body really tightened up is if I let myself sit around and give my muscles a chance to tighten up. Recovery starts right after the game for me and keeping hydrated and fueling my body with all good foods and stretching.”

A big part of Colville’s success has been a focus on strength. With a weight training program and a pipeline of some big kids on the line, Colville can get you with their speed, with QB Sam Anderson or Michaliszyn beating you on the outside, or behind a monstrous line that includes massive bulldozer Jory Dotts.

“Having a line that can execute and block is a huge part to what I do,” Grant said. “If I don’t have blocks and running lanes I can’t do my job. Having a line with bigger guys is very advantageous in the way that it’s very easy for me to see them and what they are doing so I can make my cuts accordingly. Jory has been a major factor when it comes to our offense. It’s like having two guys in one, when Jory can block two guys at once it makes everyone else’s job that much easier.”


Dotts came away from the annual EWU football game for prep teams as the camps MVP. This against much bigger schools with much bigger athlete pools to choose from.

With size like that up front, it turns someone like Grant into a cruise missile. He can either bunker bust the defense or make a wide sweep and cruise to paydirt.

“If I had to describe myself as a running back I would say I’m a power/speed hybrid, I can make people miss in the open field and I can also run through a wall of defenders,” Michaliszyn said. “Someone I’ve always idolized and thought of myself to be like is Panthers running back Christian McCaffery. He is a power house who can run and catch, a running back who can run clean routes and catch the ball is dangerous.”

While football is a big priority, something Grant sees as a huge commitment, he values school and realizes that it’s got to be a focus. He’s a busy kid during the school year and when he’s not footballing, he’s honing his skill as an all-league catcher. Generally considered the toughest position in the sport and a leadership role, Michaliszyn embraces the role of being behind the plate and the epicenter of how a baseball play develops.

“This also helps for football and trains my eyes to pick up things others may not,” Grant said.

Michaliszyn brings a good attitude and good effort to the field and tries to be as coachable as possible. He sees vision as a big thing, and if anyone can look into the future, they can see big things for this hard-hitting, quick-footed running back.