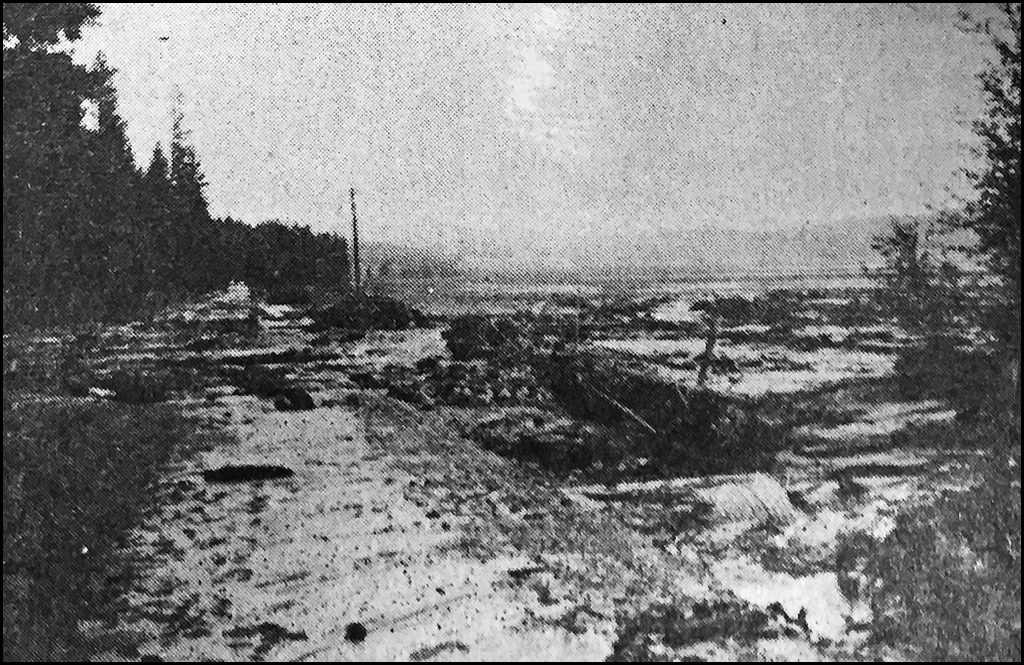 On May 18, 1974 the US House had just begun formal hearings on impeachment of then-US President Richard Nixon. India carried out its first nuclear test, the Boston Celtics were celebrating another NBA title.

In Chewelah? A catastrophe was about to happen. An earthen dam, located behind Quartzite Mountain east of town, gave way from its task of holding back Horseshoe Lake.

The result as reported by the Chewelah Independent in 1974, was nothing less than a spectacle.

“A deep rumble that sounded like a logging truck was heard by person above Cottonwood Road at about 10:30 Saturday night. The rumble was soon identified when the creek flowing down from Horseshoe Lake became a rushing torrent, washing out sections of road and doing extensive property damage to several persons’ homes in the area.”

The earth dam had given way because of the high water level at the lake. This was later attributed to a plugged drain tunnel, causing water to gather and eventually lead to a massive washout

When the dam broke, the water in the lake was completely drained, leaving a 25-foot wide, 30-foot deep gorge. The flood cut the creek channel down by as much as 60 feet in some places.

According to the Independent, the old Schmeller Saw Mill was completely destroyed from the resulting flood. It was located in John Robert’s Field. The road above Alexy Playfair’s home was washed out as well as the road below Clyde Scott’s home.

That latter road was ruined beyond repair and the newspaper said a new road would have to be around Scott’s home.

Hank Razey’s land was covered with rocks, gravel and trees. The home of Mr. and Mrs. E.G. George on Cottonwood Road had their basement completely flooded. Their deep freeze was even tipped over and its contents were spilled into five feet of water.

“They had to use a sump pump to remove the water,” The Independent reported. “The George boat was carried away to the field across the road. They retrieved it Sunday afternoon.”

Stevens County acted quickly and according to the newspaper, road section had begun by Monday after the large wipeout.

Anyone hiking Quartzite Mountain today can see some sections near the road they took up to the trail where the flooding had carved out.

The culprit of this disaster, Horsehoe Lake has quite a bit of history behind it. The lake was drained in 1906 by copper miners who needed to raise hay for their horses. In 1929, the lake was dammed and refilled in order to raise fish and sell eggs to the Washington Game Department.

‹ IN MEMORY: Harold Robert Adams Jr. (Boomer) › WDFW Question of the Week: What if you find an abandoned baby animal?