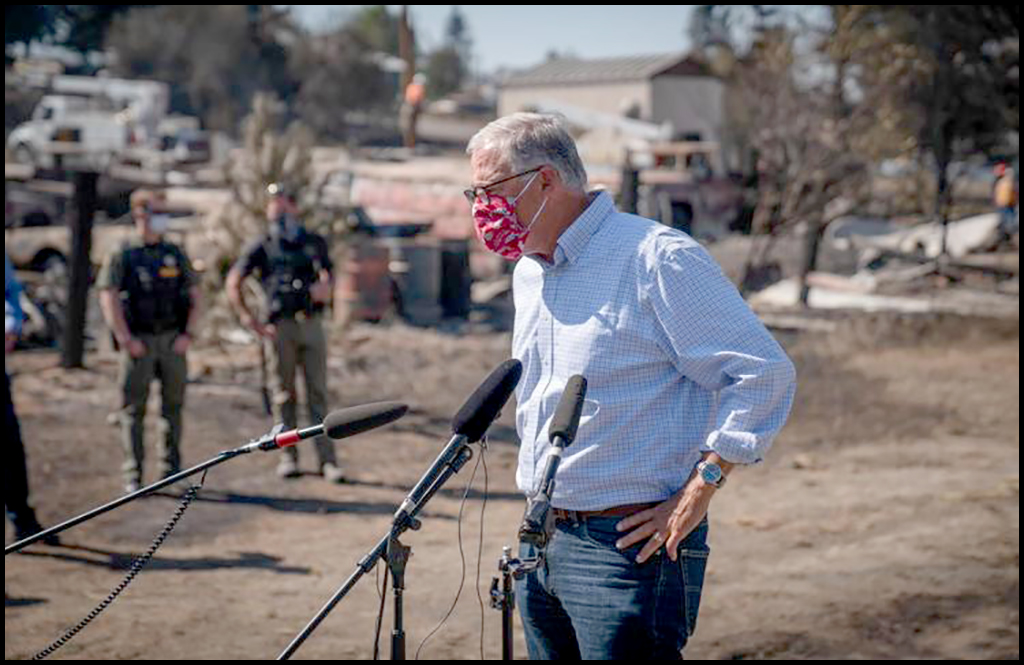 During a press conference Sept. 11, the governor commented on never having experienced an event like the wildfires that have burned hundreds of thousands of acres statewide since Labor Day. He called the fires a “cataclysmic event” for the state, saying as of the morning of the press conference there were 14 “active, large” fires in the state, which had burned nearly 627,000 acres.

To give context, Inslee said in the past five days the amount of burning was greater than any fire season in the history of the state except 2015.

“This is an extraordinary event over a very short period of time,” Inslee said. He added there had been about 1,000 residents evacuated with some 3,000 additional homes threatened by the blazes.

Inslee noted he went to Pierce County to see the Sumner Grade fire damage himself, recalling that East Pierce Fire and Rescue Chief Bud Backer said the fires were exacerbated by low humidity, requiring the recall of firefighters given the “unrestrained” nature of the blazes.

The governor also recalled the devastation in Malden, a roughly 200-population town that was reported to be 80 percent destroyed due to fire.

Speaking at the press conference, Washington State National Guard Commander Maj. Gen. Bret Daugherty said the day of the press conference the guard had mobilized three firefighting hand crews headed to fight the Whitney fire the following morning. The mobilization was in addition to several helicopters already deployed, also mentioning that the guard had 1,000 troops assigned to help with the COVID-19 pandemic.

Inslee mentioned a proclamation he made the prior day to provide cash assistance to families affected by the fires administered through the state Department of Health and Social Services. He also made a proclamation the day of the press conference waiving the hour limitations on truck drivers delivering fire retardant chemicals in order to meet the heightened demand for the resource.

Inslee said the state would be looking for “any avenue” to secure federal funding for individuals and municipalities in Washington, though it would require a disaster designation. He said hopes were to be able to assess the amount of damage by the following week.

Inslee acknowledged the state’s forestry practices clearing combustible material as working to prevent fires, though he later added that even with forest management the bulk of the fires had occurred predominantly in brush and grassland, limiting how much prevention thinning forest would theoretically have on preventing the current blazes.

He said the current low humidity, high temperatures and winds have made the state “a tinderbox,” commenting that the root cause of the conditions was climate change.

“These are not just wildfires, these are climate fires,” Inslee remarked. “We know that this is not some problem that can be (dealt with) 10 or 20 years away. It (was) this Monday when these fires exploded.”

“This has happened because we have changed the climate in the state of Washington in dramatic ways,” Inslee said. He said that further investments into clean energy would help to rectify the effects of climate change, noting prior state efforts to promote a greener economy.

Also speaking at the press conference, Washington State Patrol Chief John Batiste said the state fire marshal’s office had resources dispatched to 10 of the major fires. He took time to debunk rumors that some of the fires were set through coordinated efforts, saying WSP was unaware of any coordinated activities leading to the blazes.

Batiste noted troopers had arrested two individuals in Pierce County in connection to starting fires, but that they were not linked to each other or any larger scheme to patrol’s knowledge.

Washington State Department of Ecology Laura Watson addressed air quality impacts caused by fires burning across the whole West Coast as smoke pours into the state from the south. She said areas of Southwest Washington had “very unhealthy” levels of smoke in the air, suggesting it was “a great time to stay inside” over the weekend as smoke continues.

Inslee said the state’s response to the wildfires and its ongoing efforts with COVID-19 were not mutually exclusive, though he acknowledged there were challenges in housing those affected by evacuations and air quality during a time when social distancing was paramount to fighting disease spread.

Washington State Health Officer Kathy Lofy said there was some overlap in the symptoms of COVID-19 and inhalation of wildfire smoke and ash. She said past wildfire seasons have led to increased patients at emergency departments, adding later that state health officials had been coordinating with local health departments on potentially setting up shelters to help those experiencing homelessness to get out of the smoke.

Inslee spoke of the human cost of the wildfires, recalling the death of a one-year-old boy whose family was trying to escape the Cold Springs fire in Okanogan earlier in the week, as well as the families he encountered in Malden who suffered destruction of their homes due to fire.

”When I look in the eyes of people who have lost their homes and see their tears, I think these people deserve a response to try to protect them, to try to remove the threats that threaten their future and those of future communities,” Inslee said. “We’ve had too many towns burned down already.”