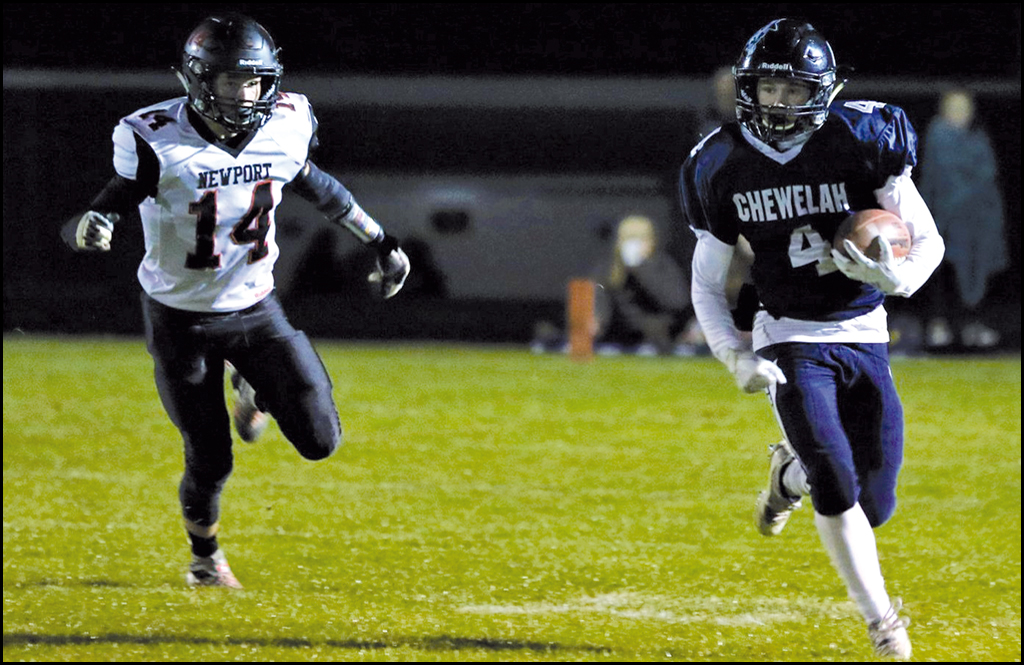 LIKE THEY NEVER LEFT: Chewelah plays another NEA League foe, despite being a 2B team, and falls 34-20…

The loss of senior quarterback Tiegen Prange to a season-ending leg injury three weeks ago dealt a devastating blow to the Newport Grizzlies. With Prange at the helm of the offense, last year’s state class-1A runner-up had started its season with decisive wins over Bonners Ferry and Priest River. For the next two Fridays, the Grizzlies struggled to find a replacement as they suffered league losses to Deer Park and Freeman.

Newport found the solution to its quarterback problem last week, converting senior tight end Michael Owen into a gunslinger. Owen threw a pair of touchdown passes and ran for two more, leading a second-half Grizzly attack that turned a one-point game into a 34-20 Newport win over Chewelah on the Snyder Field turf.

The Cougars scored the first two touchdowns of the game, taking a 13-0 lead, and appeared to have the Grizzlies on the run, but the visitors clawed their way back to take a 14-13 halftime lead. Newport scored two more unanswered touchdowns in the third period to extend its lead to 27-13 and added another near the end of the game to claim the win in the nonleague encounter. Hindered by a bobbled onside kick and three intercepted passes, the Cougars were unable to keep pace.

“I know the scores haven’t shown it, but we have been improving with every week of practice,” said Coach Cameron Gump. “It’s been hard to compete with teams like Omak, Colville and Newport who all have bigger players than we do. I thought we did a good job defensively against the run. Newport could not run the ball against us. They only got a couple of long runs on us. We also showed spurts of good execution on offense, but we still need more consistency. We put points on the board in the first quarter and then the offense stalled. We ran and threw the ball fairly well, but we just couldn’t get the ball across the goal line. We’re making some blocking changes this week that will hopefully remedy that.

“The important thing right now is that we got past these three games without any major injuries. We play an undefeated team this Friday when Lake Roosevelt comes here. They’re 5-0, but they will not be as big or as tough as Omak or Colville or Newport. They definitely did not play the tough schedule we did so far. We don’t fear them. The fact that they are unbeaten just adds fuel to our fire. We really want to win this game. The players are still motivated in spite of our record. They know that only our upcoming league games and crossover games count, and we will be ready when the time comes.”

Even with a 1-4 record, Chewelah is still ranked among the MaxPreps top 20 teams, coming in at 16th in this week’s ratings. Lake Roosevelt is ranked 10th . Asotin, Colfax, and Liberty are all in the top 10.

Chewelah received the opening kickoff and quickly marched 62 yards for the first touchdown of the game. Three carries by Kaden Krouse gave the Cougars a first down at midfield. Another Krouse carry put the ball on the Grizzly side of the 50-yard line. From there, Jake Jeanneret threw a screen pass to Jake George, who rambled down the Newport sideline for a 46-yard touchdown run. The extra-point was added by Sam Triplett and the Cougars had a 7-0 lead with 8:50 remaining in the first quarter.

When Newport’s fake punt failed to gain a first down, Chewelah took the ball on Grizzly 45-yard line. A complete pass to Jaron Baldwin and a toss sweep to Krouse with Cole Davis and George blocking at the corner gave Chewelah a first down on the Newport 34. A run by Bowen Middlesworth and a 13-yard pass to Nick Franks gained another first down at the Grizzly 18-yard line. Jeanneret then threw to Baldwin in the corner of the endzone for the touchdown that gave the Cougars a 13-0 lead with 1:41 left to play in the opening quarter after the missed extra-point kick.
Newport needed a momentum shift and got it on their next possession. A pair of complete passes gave the Grizzlies a first down on the Chewelah 40-yard line. However, a quarterback sack by Krouse accounted for an eight-yard loss, giving Newport a second down on the 48-yard line as the quarter came to a close. With the inside being blockaded by Nic Shierloh, Gunnar Hofstetter, Davis, and Krouse, the Grizzlies took the ball outside for a 21-yard gain that moved the ball to the Cougar nine-yard line. Three plays later, they scored, making it a one-touchdown game at 13-7 with 9:11 remaining in the first half.

A 20-yard run by Krouse along the home sideline gave Chewelah good field position at the 50-yard line for their next possession. But, a pair of pass interceptions turned that around. Newport intercepted a Jeanneret pass, giving the Grizzlies a first down at their 32-yard line. On the next play, Baldwin picked off an Owen pass that gave the ball right back to the Cougars, but on their own 29-yard line. Plus, a penalty moved the ball back further to the Chewelah 15-yard line. Krouse got the Cougars out of the hole with a 20-yard run, but a tipped pass was intercepted by Newport, turning the ball over to the Grizzlies.

Again, the middle of the Chewelah defense held strong with Shierloh, Krouse, Davis, and George applying the stops, forcing Newport to punt. Franks got the Cougars jump started with a 26-yard catch, but the drive bogged down at midfield and they punted also.

Newport put the next three touchdowns on its side of the scoreboard using some long-gaining plays to move the ball. The Grizzlies scored after completing a 34-yard pass just prior to halftime to take a 14-13 lead. They used a 30-yard pass followed by a 26-yard quarterback keeper to score early in the third quarter to widen their lead to 20-13. After recovering an onside kick, they went to the air again for 31-yard and 19-yard catches later in the third quarter to set up their next touchdown to make the point spread 27-13.

A 55-yard pass from Jeanneret to Middlesworth put Chewelah in the red zone at the Newport 10-yard line with a first down on its next possession. Even so, they did not score. Four plays later the Cougars turned the ball over to the Grizzlies on downs. They did score one more touchdown, however, following another strong defensive stand that forced Newport to punt. On the first play, Jeanneret connected with Franks for a 55-yard air mail gain that ended just two yards short of the goal line. Two snaps later, Krouse bulled his way into the endzone. Triplett tacked on the extra-point kick and it was suddenly a one-score ballgame at 27-20 with 11:57 to play in the fourth quarter.

Newport scored one more time midway through the quarter to stretch its lead to 34-20. Both of Chewelah’s final possessions ended in pass interceptions.
Jeanneret completed 11 of 21 passes for 234 yards, including touchdown throws to Baldwin and George for 18 yards and 46 yards, respectively. Franks was his top receiver with five catches for 97 yards.

Middlesworth’s 55-yard catch was the longest of the night.

Krouse led Cougar ballcarriers with 16 carries for 59 yards and a touchdown. Chewelah finished the game with only 72 yards of rushing offense, but that beat Newport’s total of 46 yards on the ground. The Grizzlies completed 16 of 24 passes for 212 yards. They ended with 260 yards of total offense. Chewelah totaled 306.

Krouse led the Chewelah defense with 19 tackles. Davis and Shierloh each had 11, Hofstetter 9, Franks 7, Kruz Katzer 6, George 5, Middlesworth 4, Ryan Marang and Triplet each 2, and Jeanneret 1.

Friday’s Homecoming Game is set to start at 7 p.m.


DEER PARK DEFEATS COLVILLE IN NEA LEAGUE BATTLE
It’s unexpected that Colville would lost two home games in nearly exactly the same manner. Last Friday, Deer Park led the entire game en route to a 21-20 victory over Colville.
Deer Park moved to 5-0 on the year and now has the inside track for the NEA League title. Colville fell to 3-2 on the year and 1-1 in league play.

The game was a battle with a scoreless first quarter. Deer Park’s Matt Jorgensen got the scoring going, catching a 25-yard touchdown pass from Bird. Colville Fed Ex running back Grant Michaliszyn answered back with a 30-yard touchdown run to make it 7-6. Deer Park got their second touchdown from a 30-yard run by Lim. Colville would score before halftime as hobbling and dealing with injury Paul Skirko snagged a 75-yard pass from Indians QB Sam Anderson.

With the deficit 14-12 at halftime, Bird would throw another touchdown pass in the third quarter to Durgeloh. Colville wasn’t done, however, and Anderson threw a 17-yard scoring pass to speedster Spencer Fox to pull within a point thanks to a two-point conversion run by Michaliszyn.

With 23 seconds remaining in the game, the Stags blocked a 40-yard field goal to preserve the victory, in an ending and score that was very much like Colville’s Week 1 loss to 2A Cheney.
There were seven punts total in the game, three by Colville and four from Deer Park in a very defensive struggle.

Colville’s Anderson completed three passes for 107 yards in the game.

On defense, Tyler Baun had 10 tackles and Skirko had nine tackles.

Colville will now host 4-1 Riverside in another NEA League battle this Friday at 7 p.m. on the Indians’ home field.

INCHELIUM GETS THE VICTORY OVER NORTHPORT
The short-handed Hornets played short-handed Northport in a NE 1B matchup on Friday, with the Hornets coming up big on defense and winning 30-6. Northport fell to 2-3 on the year despite 170 rushing yards on 18 carries. Senior running back Jahsom Rahif scored the Mustangs lone touchdown in the game. Northport will now host Curlew at 7 p.m. this Friday.

RIVERSIDE TOPPLES LAKESIDE
The Rams pulled away in the second half for a 34-9 1A NEA League victory over Lakeside on Friday. The loss dropped Lakeside to 1-4 on the year despite a three-yard rushing touchdown by Ian Hendershott for the Eagles. Riverside was led by Sammy Desroche’s 220 yards and three touchdowns. Lakeside will now play at 5-0 Deer Park.

WELLPINIT PICKS UP WIN OVER CURLEW
Wellpinit won its first game of the year, downing Curlew 32-22 last Friday. Curlew fell to 0-4 on the year while Wellpinit improved to 1-3 on the year.

TONASKET DEFEATS KETTLE FALLS
The Bulldogs fell to 0-4 on the year with a nonleague 56-13 loss on Friday on the road. The Bulldogs will now host Manson for their homecoming game on Friday at 7 p.m.

FOOTBALL TIDBITS
Reardan fell to 4-0 Asotin 38-0 last week, Chewelah had previously beat the No. 5-ranked team in the state. Liberty, a 2B team that downed Chewelah, improved to 4-1 on the year by downing Davenport 21-7. Davenport, which is in the NE 2B North with Chewelah, is now 2-3 on the year. Northwest Christian, another NE 2B North team, lost to Oroville 13-11. In 1A action, Freeman beat Medical Lake 56-8 and is now 2-3.