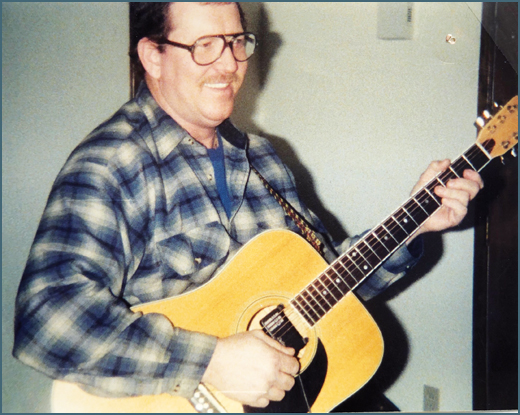 Thursday evening March 21, 2019 69-year-old Stephen M. Rieckers closed his eyes and went to be with his savior Jesus Christ and all his heavenly family. He died at home surrounded by his wife and children.

Nobody could tell a story quite like he could. He lived his life to the fullest and was happiest with his family and a fishing pole in hand. When he wasn’t fishing, he was on his tractor or playing one of his many guitars. He loved the old gospel hymns and old country westerns. Steve loved the Spokane area with its many lakes, mountains and forests. Being at home with his family and his dogs were the most important things to him, especially Sophie who was waiting at the rainbow bridge for him. He couldn’t wait for fishing season and to take his boat out, although in his younger years there wasn’t much fishing, just untangling the kids lines. He wouldn’t have had it any other way.

On March 21, 1969 Steve entered the United States Army. He was a part of the 1st. Air Cavalry Division. He received several Bronze Stars, Expert in Rifle and a Vietnam Campaign Medal. He was a helicopter crew chief. He was honorably discharged on January 12, 1973. After returning home he returned to Spokane and worked at Kaiser Aluminum and Northwest Alloys. He enjoyed fishing, camping, playing his guitar, and evening games of dice with the boys. He was a man of many talents and loved ending his summer days with his family and a hot dog roast. One of Steve’s greatest accomplishments was receiving his HS Diploma from North Central High School in July of 2017.

Steve was born to Marguerite (Crosby) and Ernest Rieckers on May 29, 1949 in Spokane, Washington. He married the love of his life Susan (Stokes) on January 22, 1983 and spent the next 36 years building memories and treasuring the time they shared together. Steve is also survived by his favorite (and only) daughter Renae (Steve) Fitzgerald of Valley, WA., Sons Brian , Spokane, WA. and Stephen R (Rick) and David Rieckers both at the family home, Ford, WA. Steve also has 15 grandchildren and 3 great grand-daughters. He is also survived by his brother Paul (Barbara) Rieckers, sister Elizabeth (Betty) Rieckers and many nieces and nephews. Brother in law Tom (Teresa) Stokes, Spokane, Wa. and Ruth (David) Gliko, Belt, Montana. He was preceded in death by both of his parents and sister Mary Katherine. His grandparents and many cousins, aunts and uncles also preceded him in death. Memorial services will be held Friday March 29, 2019 at 2 p.m. at Heritage Funeral Home, 508 North Government Way, Spokane, WA. 99224.

Steve’s family would like to extend a special thanks to the VA Hospital and Staff and Summit Cancer Center, especially Dr. Carolyn Aks. Thank you for all for the prayers, well wishes, visits and phone calls the past two years, and to his children a special thank you for your love, support and care (except for the time Renae set the bed alarm on the hospital bed—we will talk about that at a later date Sissy). Until we meet again.